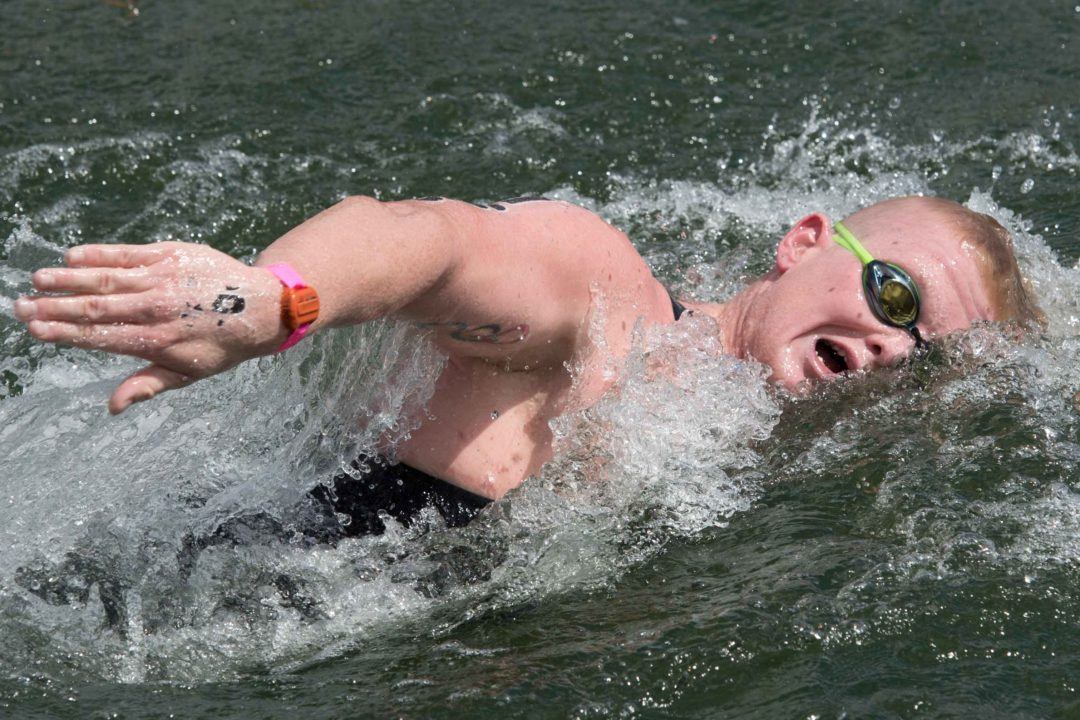 “Now, facing one year ineligibility for this, from the sport and a way of life I’ve dedicated so much to over the past years, it has been a very tough pill to swallow, however I’ve chose to accept and respect the situation," says now-suspended Australian open water athlete Jarrod Poort. Archive photo via Mike Lewis/Ola Vista Photography

We’ve since reported how Fraser-Holmes was handed a 12-month ban by swimming governing body, FINA, and was also cut-off both financially and training-wise from the Australian National Team. The swimmer is in the process of appealing his ban.

Swimming Australia has now confirmed that Poort has also accepted a 12-month anti-doping suspension for his whereabouts violations. The sanction was imposed on Poort by Swimming Australia following a recommendation by the Australian Sport Anti-Doping Authority (ASADA) CEO under the terms of the National Anti-Doping scheme. Poort’s suspension began on September 5th of this year and will conclude on September 5th in 2018, thereby taking the athlete out of contention for 2018 Commonwealth Games participation.

Swimming Australia CEO, Mark Anderson said, “We fully support all anti-doping policies and our athletes understand that the rules in place to ensure that all athletes must be available for testing at their designated location and time are a very important element of anti-doping policies.”

“The Australian Dolphins Swim Team has worked hard to develop a culture of professionalism and respect within the team. Part of that professionalism is ensuring each athlete is accountable and responsible for accurately providing their locations so testers can access them when required and it is extremely disappointing that this has not occurred as it should have.

“Both Swimming Australia and our athletes have been very clear on our position both here in Australia and internationally. Jarrod has taken responsibility for his filing errors and we continue to work with and support Jarrod as best we can to support him through this process. Jarrod has accepted responsibility and understands the impacts of his actions. Whilst clearly this is a very disappointing situation for Jarrod and swimming, we need to reiterate that this is not a positive result and his ownership and acceptance of the situation is admirable.”

Under the terms of the Anti-Doping Policy, for the duration of the sanction Poort will not be able to:

The 22-year-old Olympian Poort stated, “At the end of the day people make mistakes and that’s what I did. It was remiss of me to neglect a management system that must be shown the full respect it deserves and it is a very embarrassing situation to now be in.

“The Whereabouts system is one of the tools that aids in keeping legitimacy in the sport that myself and so many others love and spend so much time in, and as such it needs to be treated with precision and respect.

“Dealing with, and getting my head around the whole situation that has been ongoing since February has been a very tough period of time for myself. At times, I wasn’t myself; however I’ve had some great friends and family around to help support and navigate me through it all.

“Now, facing one year ineligibility for this, from the sport and a way of life I’ve dedicated so much to over the past years, it has been a very tough pill to swallow, however I’ve chose to accept and respect the situation.

“A mentor that I look up to recently said to me – “Simply wanting or yearning for a new way will not produce it, you need to end the old way(s) first.”

Poort continued, “So, I am taking this in my stride, learning from it, then putting it behind me and turning the year of ineligibility into a learning tool for becoming “Jarrod who can also swim” and not just “Jarrod the swimmer”, and focussing on some of my other life aspirations.

Groves now remains as the final case to be determined of the 3 Australians.

So far I was right with the 12 months . 2/2 ain’t bad . Really SA you should hire me as adviser above whatever corporate spivs you have now . I’m rarely wrong .

I think groves will win on appeal though

On what grounds ?? If what was aired about one of her missed tests (in the USA) is correct, then she would be very lucky to escape if THAT was the one she was “banking on” being overruled. She was training in the USA with a USA squad but still listing Michael Bohl (her AUS coach) as contact ….. that doesn’t exactly read as if she was keeping all her details updated.

Maybe she WILL be able to dodge a bullet on one of these missed tests …. but if she does, might I suggest she also buys herself a lottery ticket as what has been aired so far has pointed in the direction of her being just as… Read more »

i’m curious why coaches are contacted at all beforehand. just call her direct. they had her number.