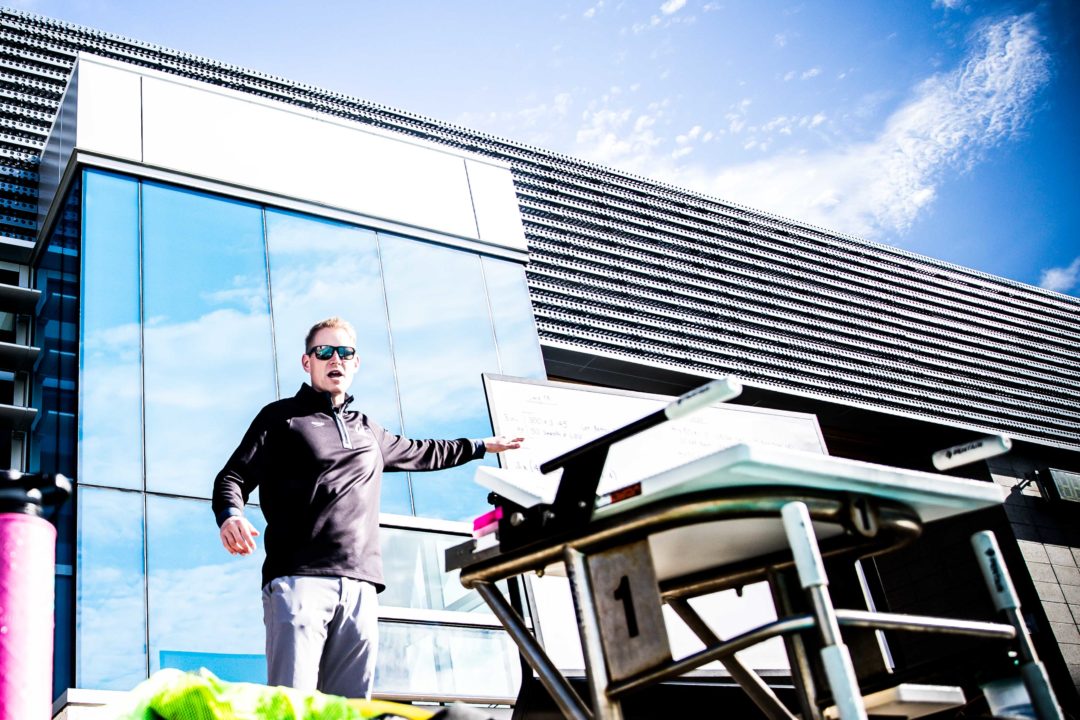 The Pitt Panthers have a big hill to climb in a loaded ACC, but their first outing under new head coach Chase Kreitler had plenty to give them hope. Archive photo via Jack Spitser/Spitser Photography

A new era for Pitt swimming & diving began last week at the team’s annual Blue Vs. Gold Intrasquad meet. While not a bona fide NCAA competition, it is the first varsity racing of the Chase Kreitler era.

Kreitler takes over as Pitt’s head coach this season after 4 years as an assistant at Cal, a team that won the 2022 NCAA Championship in men’s swimming & diving.

A few lean years for the program combined with a number of transfers out has left a big rebuilding project for Kreitler, but his first outing still saw some very positive signs for the Panthers.

The Australian was quiet over the summer about his plans for this season, but his appearance on the Pitt roster and in the intrasquad gives the new-look Panthers a focal point to build around, plus an NCAA qualifier (and near All-American) to present to recruits.

Not far behind him was Jerry Chen of the ‘gold’ team, who was 54.28 in the 100 breaststroke. If the Pitt men’s team has an early identity, it might be breaststrokers.

If not breaststrokers, it’s diving. The Pitt diving program, which under the previous administration had most of the program’s success (including an NCAA title), was responsible for Pitt’s two highest scorers on the men’s side at last year’s ACC Championship meet. Then-freshman Cameron Cash scored 59 points and then-junior Dylan Reed scored 55, including a 3rd-place finish on the 1-meter springboard.

Not only did those two return this season, but the team added a star new freshman Daley Fraser who won the 1-meter event on Thursday by 30 points ahead of Cash.

With that, the Pitt men return all but 2 of their individual ACC points from last season, where they scored 431 total for a 9th-place finish.

The climb for the Pitt women this season will be a little steeper. They lost their top 3 scorers from ACCs last year, though the return of 15-point distance swimmer Jacqueline Tinneny for a 5th season of eligibility is some consolation.

The freshman class, which Kreitler did not have to recruit but did have to convince to stay, showed a few sparks at the intrasquad. Kate Bailey won the 100 fly in 54.71. That’s not far from her best time of 54.0 in the race.

Bailey comes from the Arlington Aquatic Club in Virginia, where she trained alongside the defending World Champion in the 100 fly Torri Huske.

Pitt’s first intercollegiate meet will come on October 21 and 22 when they host Penn State and Notre Dame for a tri-meet. Notre Dame is also hoping to bring energy with a new coaching staff this season.

I didn’t include it in the article because I suspected it was a touchpad error. The splits before and after him don’t make total sense, so one of them is probably slower than it should be.

Tessa Mock is a sophomore.

Alex Craft has been sneakily on the rise though, excited to see how he does this year

Where is that picture of Chase from? Does Pitt have an outdoor pool?

It’s from Cal. We don’t have any photos of him at Pitt yet, and that was the only one without obvious Cal logos all over.

Coaches tell you to swim faster, you flip them off.

Didn’t even have to look at the printout to guess which swimmer it was. Same old, same old. Sad

Text me if you have any questions about that🥰
Ig: dudzio_

If I were you I would bet money next time