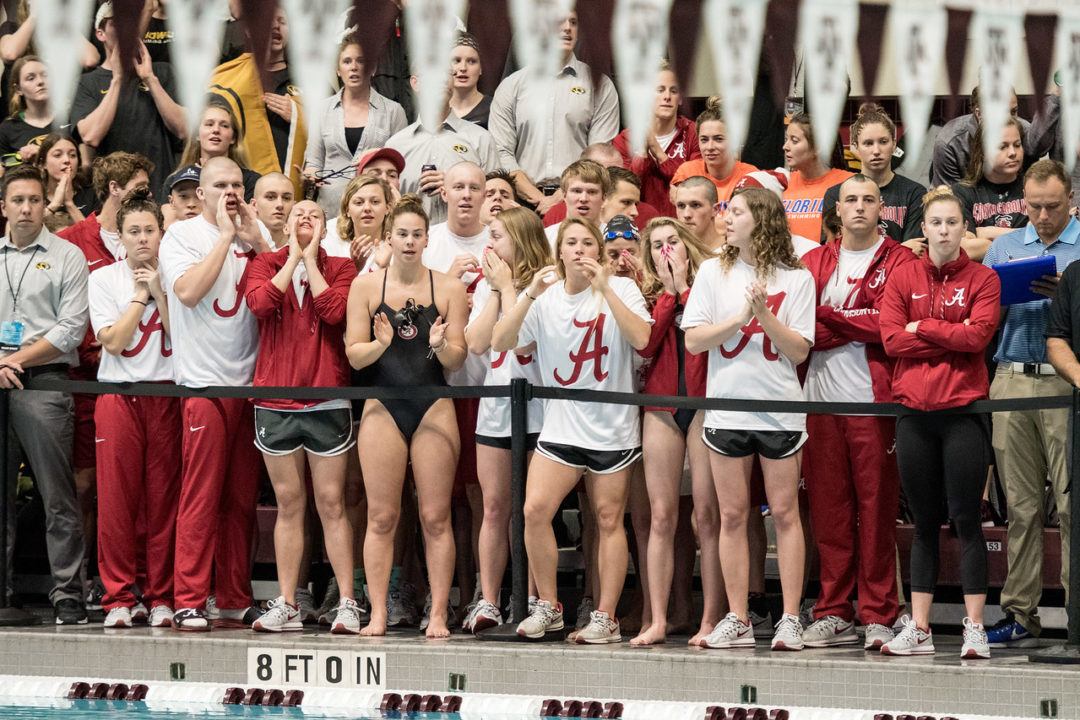 After two seasons at the University of Pittsburgh, Westfall becomes new head coach Coley Stickels' first hire since he was brought on at Alabama in April. Archive photo via Thomas Campbell/Texas A&M Athletics

Westfall joined the Panthers’ staff in 2017 after a season at Indiana State. Prior to that, as an assistant, she was at the University of North Carolina-Asheville for two seasons, and coached two seasons (2012-14) at Warren Wilson College in Swannona, N.C.

Earlier in her career, she served as interim head coach and aquatics director at Emory & Henry College in Emory, Va. (2011-12), before continuing her coaching career at Adams State College in Alamosa, Colo., serving as the director of swimming and aquatics for two years. There, Westfall established the first-ever women’s program in school history and reintroduced the men’s team for the first time since the 1970s.

In her own swimming career, Westfall was an eight-time NCAA All-American and nine-time Big 12 Conference champion swimmer at Texas A&M from 2003-2007.

Alabama’s website now lists Stickels plus his first three hires on its coaching roster, meaning there is likely still one spot remaining in addition to Westfall.

James is an amazing guy to talk to and I’ve only heard amazing things about him from his swimmers (and those should be the only opinions that matter). He will fit in amazingly with the new staff and his love for the university is apparent.

Great hire on the part of Bama. On the whole, good hires across the board. There is still a fifth position on the coaching staff. Its really rough for me personally to see some of the things written about the former staff. Talk with any of James’ swimmers and you’ll know he was always on point in his coaching. If he took 30 minutes teaching how to throw a curveball it’s because it had a purpose related to swimming or it just meant his kids were gassed at workout and he gave them some room to breathe. Jonty was/is a fantastic recruiter and a mad scientist at the pool. He’ll go on to have great success at IU and I’m… Read more »

Talk to any of James Barber’s current/former swimmers and you’ll know he is the most loved coach on staff. Guy gives it his all and loves his athletes like they’re his kids. After all the improvements his group consistently makes, he deserved to be retained. Anytime he’s talking about something else in practice or letting loose, it’s all to relax his swimmers and create a fun training environment. He knows how to get the most of out his athletes and I’m looking forward to watching him continue his success with the new staff.

Im thinking Rebecca should stay at Pitt. Word on the street is CS was not going to be rehired at IU due to multiple run-ins with Ray & Mike and two potential female assistants already turned down an offer to be on his staff. I also hear CS hired Barber from Pursley’s staff and the current athketes don’t want to swim for Barber—-something about teaching them how to throw curveballs (?).

Being a fan of a rival SEC school, this is all good news to me. #Shouldahiredjonty

Exactly what do you mean by run-ins? Could you elaborate

With the revolving door of drama at IU it is hard to give any credibility from anything coming from Bloomington. Reliable sources share that Barber being forced on CS so this is not necessarily the last hire.

This is truth. While I am a fan of a different school, my niece swims for UA. Barber apparently walked around practice w earbuds in many days, talking with Pursley and trainers (rarely engaging his athletes) and was very much forced on CS bc Barber’s wife is a professor at UA and admin told CS he had to hire Barber. As for the curveball comment, I asked my niece. Apparently Barber spent over 30 minutes on multiple days teaching his athletes how to throw curveball DURING PRACTICE.

Revolving door of drama… many schools would take their recent track record. Period. If multiple Olympians, Rio Gold and NCAA champions is drama… if I’m a coach gimme some drama please.

If a culture of success for the few at the expense of everyone else is in line with your values than Bloomington is the place for you. I would not choose that for any friend or family interested in swimming or coaching. It seems my core values are different than yours. Period.

As a former swimmer at Bama. I can verify James does in fact do that ^. He is always off topic and distracted at practice. I’m sure he was not Coley’s first choice.

Stickel is more drama than any team wants. Not sure what the AD was thinking besides a results only decision, but Alabama could/should have done better for the safety of their athletes. Look at where he has been. All of his stints have not been that long. Would be interested to know what really happened at IU…

He was in Oregon for 9 years and Canyons for 6…IU for 2 and a half. I think what happened at IU is that Coley was producing great results and got offered a better job at Bama. Is this really hard to figure out?

What absolute nonsense. On the contrary, IU did not want to lose ‘CS’ and offered substantially more in salary to retain him. I’m curious about the so called “run-ins” with Ray and Mike. I would say run ins with those two is par for the course on the IU staff with the amount of turnover there.

Don’t know much about James but he has survived multiple head coaches at Bama so his swimmers/admin must think he is ok.

Would love to know where you are getting your info? And shoulda hired Jonty? I think Bama tried that once…how did that work out?

I’m glad you have such an inside source on the Alabama swim team drama but I think it would be most appropriate to keep the gossip off such a public forum. There is enough anxiety about having a complete staff change, and athletes reading your claims is not going to help the situation. Let’s face it, when there is so much movement and coaching there is going to be a ton of things to talk about. James Barber might take some time to talk about things other than swimming, but he is a phenomenal coach and has produced countless national level athletes. He coached (basically developed) SEC and NCAA champion Connor Oslin in his most recent years. Curveballs or not,… Read more »

having one be able to show up and perform does not directly come from coaching. If you pay attention to the track record 3 swimmers have left the team in the recent year and all came from barbers group. Has any single one of them been able to drop time since staying training with him? Yes there was one, but there shouldn’t have to be 1000 to make that happen.

She should either go to administration or find somewhere else to train. Not an ideal situation anyone should be dealing with… Especially at such a prominent D1 University.

So if only one hire is left, it seems the probability of the current Alabama coaches having a position within the new Coley program are slim to none. Where will those coaches go?

Rebecca Westfall should be the last hire so there are no more positions available.

Great hire! Rebecca is fantastic and will be a great fit with Coley and Ozzie! Well rounded staff.