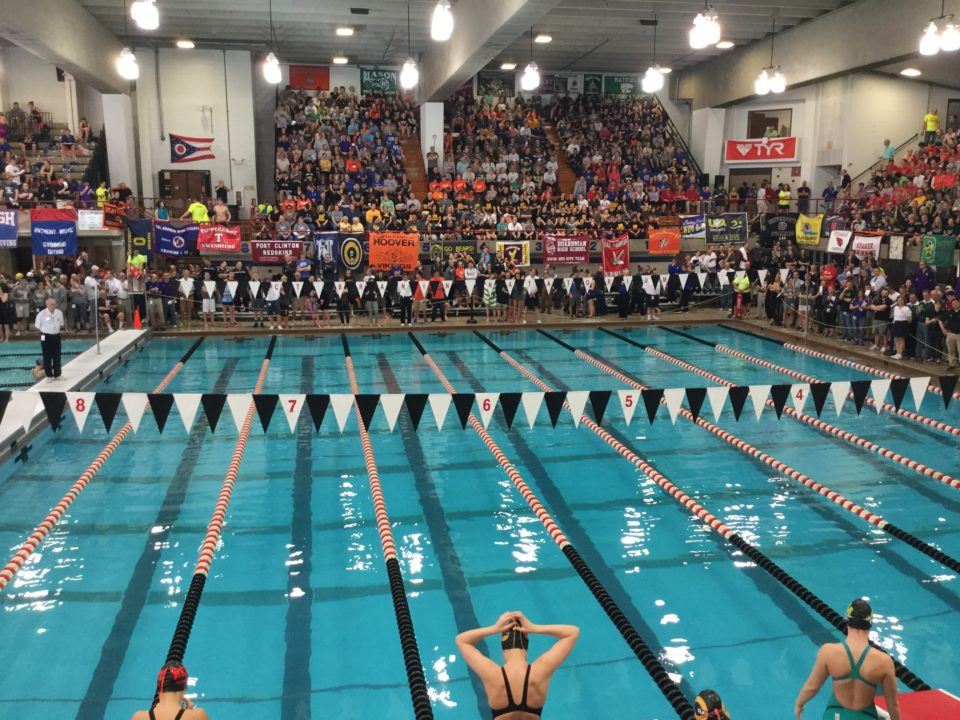 NISCA has released the time standards necessary for achieving All-America status for the 2019-20 school year. And with few exceptions, they've gotten faster. Archive photo via SwimBros

NISCA (National Interscholastic Swimming Coaches Association) has announced the time standards necessary for achieving All-America status for the 2019-20 school year. The NISCA/Speedo Swimming All-America lists for the 2018-19 season were released today as well.

In keeping with the pattern of the past several years, many of the times have gotten faster. While the Automatic and Consideration meters times for the boys did not change in the 200 medley relay, 200 free, 200 IM, 50 free, 100 free, and 400 free relay, time standards in the other boys’ events, as well as in all but one of the girls’ events, were tightened. The only exceptions are the girls’ 200-meter freestyle and 400-meter freestyle consideration times, which were relaxed. Excluding those outliers, the girls’ meters standards were .17% faster than last year’s times vs .12% for the boys, and the girls’ yards standards were .17% faster vs .16% for the boys.

To earn All-America designation, a swimmer must be on an interscholastic team and be scholastically eligible as determined by his/her state athletic association or school authority. All swimmers must be in at least the 9th grade level of school to be eligible and are limited to 8 consecutive semesters. No middle schoolers or fifth-year seniors will be considered. The top 100 swimmers in each event will be chosen. Times on the below list must be achieved during the program year, either in short course yards or in short course meters. Those who make the consideration standard will be added until 100 swimmers are chosen per event.

Applications may be submitted from November 1st through June 15th, as mentioned in the official rules. NISCA only recognizes athletes whose applications are submitted by the deadline.

The All-American diving standards have not changed from 2018-19. The Points and Degree of Difficulty (D.D.) Requirements are as follows:

EXCEPTION – A Diver who places first through sixth in his/her respective state meet and meets the minimum D.D. requirement but does not meet the minimum score requirement may submit an application for consideration.