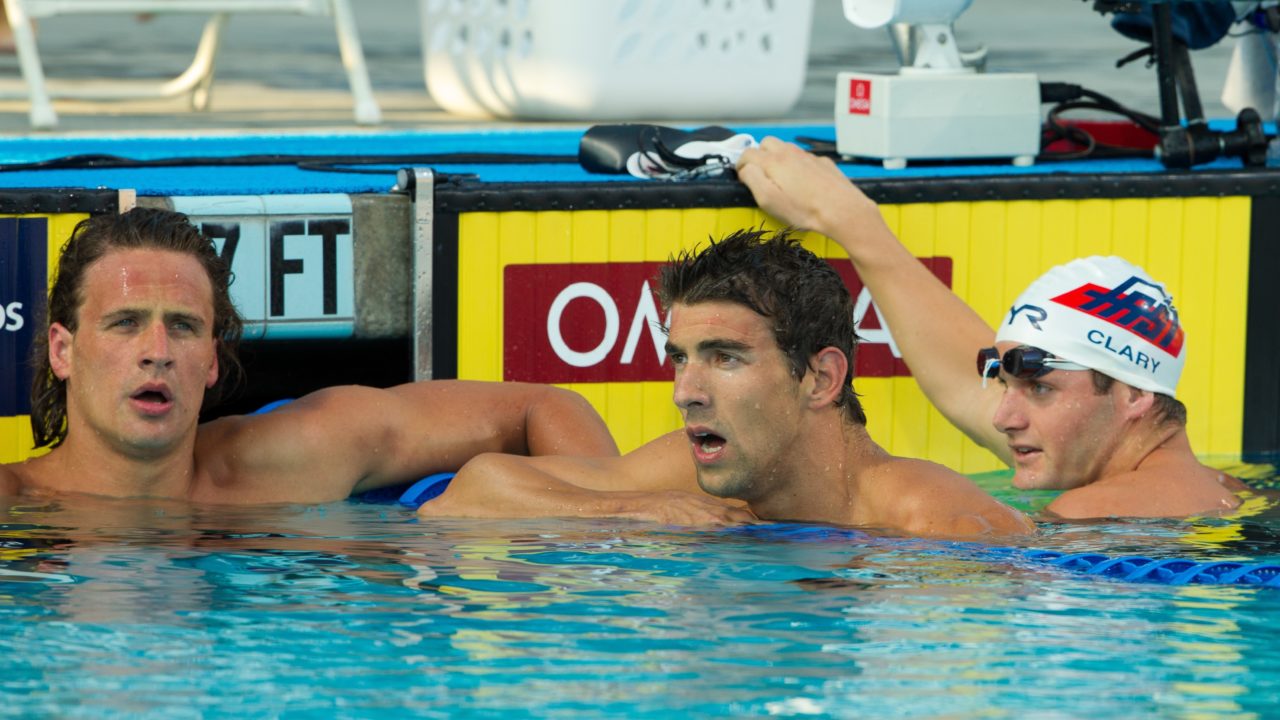 All eyes will be focused on these three on the first day of trials in Omaha. (Photo Courtesy: ©Tim Binning/TheSwimPictures.com)

Make your own picks!  Enter the SwimSwam US Trials Pick ‘Em Contest.  You could win sweet prizes from Engine or your very own SwimSwam Swag.  Click here!

As the countdown to Omaha moves from day to hours, it’s time to look at the most highly-anticipated race of the entire meet, on the men’s side at least, in the 400 IM’s. Both races don’t show a lot of parity, but the swimmers at the top are among the best in the world.

For a full rundown of all of our race-by-race previews, click here.

There are two distinct strata in this men’s 400 IM. At the first, there are the three superstars – the three best 400 IM swimmers in the world – Michael Phelps, Ryan Lochte, and Tyler Clary. And then there is a group just behind them – Tyler Harris, Robert Margalis, Chase Kalisz, and Conor Dwyer, with a valley in between the two.

Clary made it clear in his interview with Garrett McCaffrey that he’s swimming this event, that he doesn’t think Phelps is, and that regardless of the competition, he’s shooting for the victory. I still think Phelps is swimming it, but regardless of who he’s racing, Clary says he’s shooting for a 4:08 in this race. That’s three-seconds faster than he was at last year’s World Championships where he was the silver medalist.

The big questions here then become two-fold: can Clary hit his goal, and if he does (and Phelps swims) will Phelps’ entry matter?

I think Clary can absolutely get to a 4:08-something. Everybody was slow in Shanghai last year, but Clary was a 4:09-low in 2010 at Pan Pacs. He must have improved since then, so if he really goes after this race dropping three-or-more tenths seems almost inevitable (if he hits his taper). But if Clary goes a 4:08 – is Phelps the one who should be afraid of him in this race?

I think Phelps can go a 4:08 too, on the basis of a 4:12.5 earlier this season. That sets up for an outstanding battle, and I don’t think any of the leaders – even the defending World Champion Lochte – can feel safe in that three-man race. Of course, if Clary is right and Phelps doesn’t swim it, there’s two clear favorites here.

But who from that second group can leap the gap? Tyler Harris, now training with Trojan, is the 4th seed. Like most 400 IM’ers, he’s very much a taper swimmer, and has been right around the same marks in-season this year (4:20) as he was last. With only one taper meet to focus on, that should put him capable of at least a 4:14, if not a bit lower. Most importantly for him, he can out-swim any of the major players on the breaststroke leg.

At 30-years old, Robert “Robo” Margalis seems to be past the point of making a huge drop to get to the 4:10 or 4:11 that it would take even in a worst-case scenario for the top three to miss the team.

Conor Dwyer and Chase Kalisz are the two swimmers that I look at who are ready to make this leap. Kalisz is a phenomenal breaststroker, and a pretty good freestyler as well – he out-split his training partner Michael Phelps in this race a few weeks ago in Austin on the final 100 meters of this event. He was more in Allison Schmitt’s category coming down from altitude training with a great meet than he was in Phelps’, who had just a decent meet. He will definitely swim this event at Trials, and only having just finished high school still has a very high ceiling.

Dwyer made a big move in this race last year by dropping almost 8 seconds off of his best time at Summer Nationals. Those kind of moves in one season can go different ways the year after – he could either hit a plateau, or he can learn a lot more about how to swim the race and get better. There’s a chance that he, like many other of the high seeds in this race (Peter Vanderkaay, Andrew Gemmell) will scratch to focus on the 400 free instead.

Gemmell is big into the distance freestyles, but his history shows that he’s not afraid to swim this 400 IM either. It’s a total tossup for him as to whether he enters this race, but the 1500 is his money-race. Josh Prenot and Austen Thompson are the two other swimmers who are worth discussing in this race. Prenot, a Cal commit, slides a bit under the radar because he’s home schooled and doesn’t swim high school. He swam this event at last year’s Junior World Championships in a 4:18, though that left him off of the medal stand. I think there’s a lot of expectation on him to have a breakout at this meet, and with so many probable scratches from this 400 IM he should be able to final. But again, he’ll have difficulty breaking into that next level. Thompson is phenomenal in short course, and ended his senior season at Arizona on a high note with a 3:39.15 in yards. Still, that’s not even close to the same stratosphere as what guys like Clary and Lochte are capable of (Clary, for example, swam a 3:38 in his last year at Michigan – and he’s had two years of post-grad training since then and is a better long course swimmer either way than Thompson). He makes a steady improvement every summer, so expect a 4:16 or so, but again not enough to jump the gap. Here’s our picks for Top 8, including club and college affiliations:

This women’s 400 IM doesn’t have quite the same star-power as the men’s race does, but it is just as locked of a top-two for anybody to break into.

With the reigning World Champion Elizabeth Beisel and a swimmer Caitlin Leverenz who  has been out-of-her-mind this long course season, with a vastly improved backstroke leg. Both swimmers should be at a bare-minimum 4:34’s, and I think both could be 4:33-or-better. There’s no Ariana Kukors in this race, which was one of the bigger surprises when the psych sheets came out, which eliminates the most obvious challenger to the top two.

That leaves only three other swimmers who have been under 4:40 in this race. That’s Katie Hoff, Cammille Adams, and Maya DiRado.

Hoff is ready to explode in this event. She has only swum it once since returning to work with Paul Yetter, but that once was a pretty-decent 4:40.8 in Charlotte. Maya DiRado was in the conversation with Leverenz, Beisel, and USC’s Katinka Hosszu, a Hungarian, at the NCAA Championships, but just didn’t have the power to keep up with those three. She’s an extremely balanced swimmer, but doesn’t dominate anybody in any one leg – though she’s a very good backstroker. In the 200, that can be a winning strategy, but it’s harder in this 400.

Cammille Adams is sort of the opposite of DiRado. She is best known for her 200 butterfly, but it’s actually a 3rd-place finish in this 400 IM at last year’s Summer Nationals that put her onto the US National Team. She will very-likely lead this race at the 100-meter mark, but will have trouble holding off the backstrokers like Beisel and DiRado after that. Of this second group, she’s looked by-far the best in-season this year, with a best time of 4:38 at the Austin Elite Invitational.

There’s a bit of a darkhorse in Teresa Crippen in this race. She has a chance at making the US Team in both the 200 back and the 200 fly, so it’s no surprise that she has a phenomenal front-half of this race. She’s got a very similar 400 IM to where her Gator Swim Club Ryan Lochte was two years ago – three great legs but a struggle on the breaststroke. Gregg Troy was able to recreate Lochte’s breaststroke and make him the best in the world. If he can do the same for Crippen, she can’t be counted out in this race.

Lyndsay DePaul from USC is another great front-half swimmer; her IM’s are underrated as compared to her butterfly races where she’s also very good. But she’s only swum this race twice this year – and in two off-the-beaten-trail meets (British Olympic Trials and the Speedo Grand Challenge). She hasn’t been better than 4:47 and has been a lot better in the 200 fly. The swims this year probably haven’t instilled much confidence in her for this event.

USC’s Meghan Hawthorne, who trains in one of the best 400 IM training groups in the world in Los Angeles, is waiting for a huge explosion in this race, if she swims it. She hasn’t since the college season ended. But she did swim it at NCAA’s, so one would imagine she’ll race it in Omaha.

I don’t know, the closer we get to Monday the more I question whether Phelps will swim it. If he doesn’t, Lochte and Clary are a shoe in for the top two spots. I really hope Phelps has learned and improved from his poor backstroke leg he had at the Indy Grand Prix where Clary killed him in that 100 with much stronger turns and I think that leg qill be the difference. The more I look at it, the more I worry Lochte will beat Phelps in this race causing Phelps to scratch London even if he gets second to qualify in order to focus on the shorter events. But at the same time, I would say Phelps has… Read more »

I’m rooting for Clary, but I’m surprised and concerned that he thinks a 4:08 will win the race; unless he’s playing a mind game with Phelps and Lochte. I have a feeling Phelps is going to swim it, and if he does, a 4:08 might not even make the team.

this is strong start for Omaha ! I think Lochte will get first ! why ? he was first in Dubai and Shangai . Go Lochte ……..

Camille Adams might upset Leverenz and take the second spot.