Phelps Says “No” to 200 Fly (And Other Post-Race Comments) 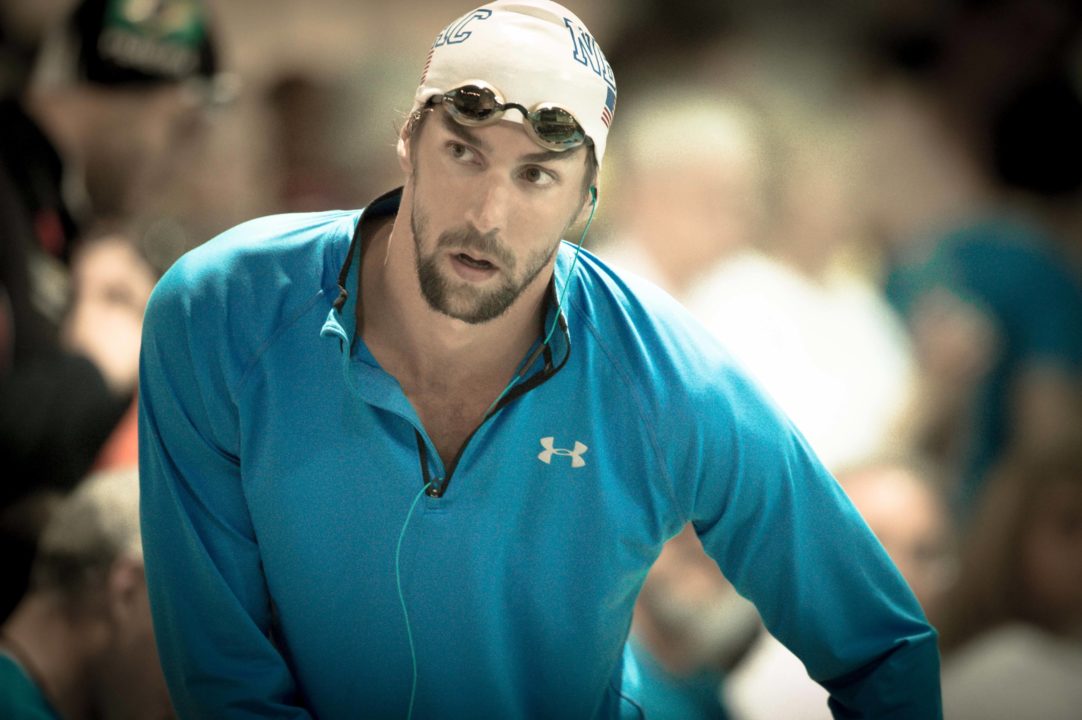 Michael Phelps has said nothing definitive, but has started to give some hints about what his new-look event lineup might be. Current photo via Mike Lewis/Ola Vista Photography

In post-race conversations with media on Friday night, Michael Phelps said he has no plans to swim the 400 IM in his comeback (no surprise) or the 200 fly (a little bit of a surprise).

While Phelps did commit to swim a “full schedule” at the Santa Clara Grand Prix in June, he wouldn’t give details on what exactly those events would be. That is, except for two events he is not going to swim.

While there wasn’t a unanimous opinion from the swimming community as to whether or not Phelps would swim the 200 fly, there were certainly plenty who thought he would come back to this event. His 200 fly career ended on a silver medal as the young South African Chad le Clos upset Phelps’ attempt at a third-straight win.

Other comments that give clues as to where Phelps’ head might be:

It sounds as though the 200 free is in play, despite neither he or his coach being thrilled about his prelims swim.

Phelps did say on Friday evening that he thought he was faster in prelims of the 200 free because he was going out with Yannick Agnel. Phelps said that he was convinced that he was sub-1:50 in prelims, but that despite the slow swim he was happy with his underwaters.

A full video of Phelps’ and Dwyers’ comments will be available shortly.

haha I guess the return of Phelps has scared the hell outta leClos’s fans.
What a childish comment!!!

Glad that Phelps is back…and can’t get enough of him kicking ass in the 100 fly.
Keep calm & support Phelps!

King Chad ? with the butterfly stroke that he has , i couldn’t call him a King yet . Certainly not the most beautiful stroke out there at all ….efficient ? certainly ! But not on the technique level of Phelps or Crocker or even Morales or Gross .

David’s “King Chad” has a nice ring to it. It indicates that the baton/crown has been passed. It certainly does not imply that Chad is a better King than Michael was. That is pretty obvious…..but, The king is dead. Long live the King!

King Chad? He’s great but there can be only one king in swimming and I think we know who that is.

I agree with your comments about the 200 fly and 200 free, but I think he still has a chance in the 200 IM. He would have to really commit to training for it, obviously, just as he would to win any Olympic medal. I’m just afraid that at 31 he wouldn’t be able to recover from doing the 200 IM final and 100 fly semi the night before to win the 100 fly. I think we saw a little bit of this in London, where he swam slower in the 100 fly final than the semi. I want to see him 4-peat very badly, so I’m hoping he’ll skip the 200 IM.

I couldn’t agree more. The reason Phelps has no interest in the 200 fly is because he has almost zero chance of a gold. The same can be said of the 200 free individual, and the 200 IM. The 100 fly offers a glimpse of a medal, which is probably silver, and the relay medals will rely heavily on his team mates, which makes them soft golds as he is not the lead man anymore. Whilst I am a big fan of his, the swimming world needs to get ready for a lot of negative commentary from other Olympic disciplines post Rio. We will be shouting about the greatest Olympian ever, and the Athletics crowd will be poking fun at… Read more »

Does anyone think he is completely done after Rio 2016?

I would say yes, but it will also depend on his result in Rio.

Rio is still a long way out and with the crop of young guns from all over the world gaining very quickly, we all need to temper down our predictions and look closely at how fast the younger guys are improving. I remember when everyone was singing at how Biondi and Jager were going to own the sprints in Barcelona in 1992 when out of nowhere a certain Alexander Popov takes both races. I’m not saying Phelps can’t do it. I’m only suggesting caution with so many new swimmers ready to take Phelps and Lochte and Grevers (add more names here if you wish) out to dry.

This time, I actually believe Phelps when he said he will not swim 200 fly anymore.

The main focus for Phelps is now 100 fly with 200 IM as an added event for a chance to fourpeat (in similar reason why he swam 400 IM in London). He is definitely also training for 100/200 free with main focus for relays.