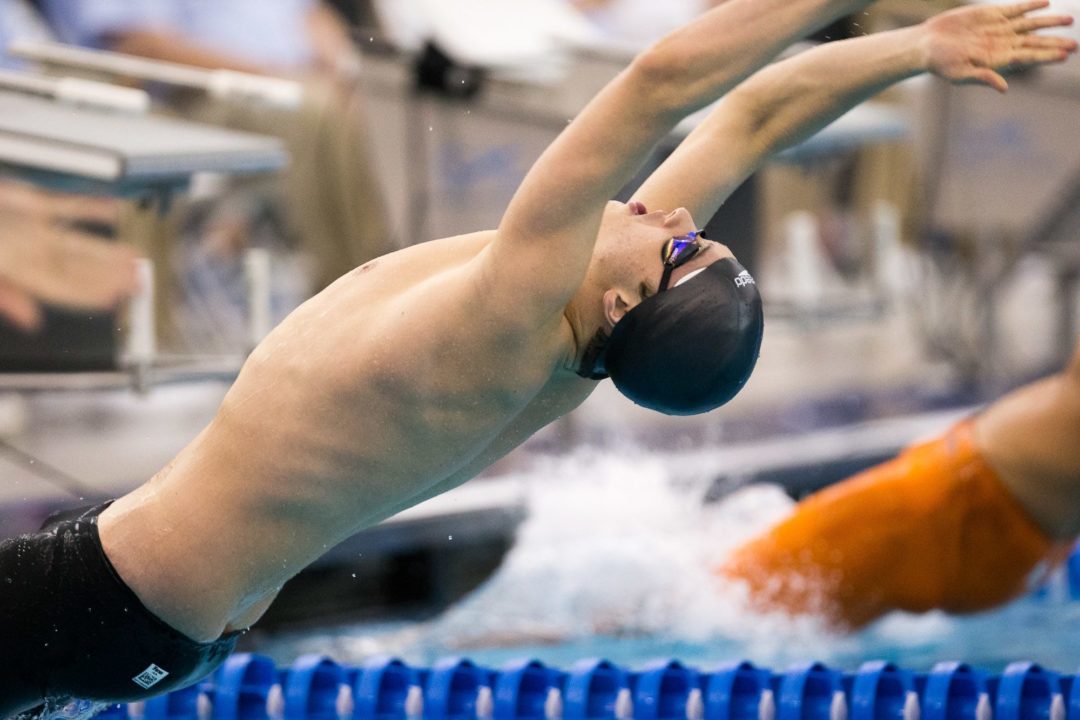 The 2014 Boys' Colorado 5A High School State Championships for underway tonight and Hennessey Stuart was the star of the show. Current photo via Tim Binning/TheSwimPictures.com

The CHSAA 5A boys high school swim and dive championships kicked off today in Thornton, CO with the prelims session.  Regis Jesuit out of Aurora is picked as the heavy favorite and they lived up to that bet by some impressive preliminary swims.

The first individual event featured a great prelim swim for Nathan Mueller in the 200 free.  The senior from Thunder Ridge who will join the Badgers at University of Wisconsin next year, snatched the top seed with a 1:39.22, just a second off the state record.  Two Regis men followed up in second and third with Christopher Dawson (1:39.96) and Austin Phillips (1:40.07).

Hennsessey Stuart, an NC State commit, started his night off with a solid 50 backstroke split in the relay and kept the ball rolling in the 200 IM.  Stuart touched in a time of 1:48.15, the top seed by three seconds.  Jake Markham from Cherry Creek fell to second with a 1:51.21 while Stuart’s brother, Quinlin, swam to third in a 1:53.25.

The splash and dash will be exciting tomorrow night as the top four swimmers are all under 21.  JP Beach out of Douglas County sits at the top with a 20.30.  Close behind him is Hunter Bains with a 20.54 and Miles MacKenzie in a 20.86.  Christian Feiler was the last man under 21 with a time of 20.90, good enough for fourth place.

Up next was the 100 fly where we only saw one swimmer break the 50 second barrier.  Maxwell Holter grabbed the top seed with a 49.29.  Jake Markham dropped to second with a 50.06 while Gabriele Sasia swam to third place with a 50.88.

Another solid prelim swim came in the 500 free where Nathan Mueller cruised to another top seed.  Swimming a 4:26.95, Mueller is four seconds ahead off the field and just .7 tenths off the state record.  Christopher Dawson finds himself in second again with a 4:30.16 while Juhan Hong is third in a 4:35.17.

Hennessey Stuart never slowed down after the relay and the IM.  In the most exhilarating race of the night, Stuart dominated the 100 back field, scoring a top seed by 5 seconds and a brand new Colorado state record.  Stuart touched in a 46.91, clearing the old record by a second.  That time would’ve placed him sixth at this year’s ACC Championships, the conference that NC State calls home. Maxwell Holter was far behind with a 51.19 for second place while Christian Feiler grabbed third with a 51.56.

Another member of the Stuart family garnered some of the spotlight by grabbing the top seed in the 100 breast.  Quinlan Stuart dropped three seconds from his seed and sits at the top with a 57.34.  Joshua Bedford was close behind with a 57.81 while Theodore Koerner is a second behind, finishing third with a 58.78.

The 400 free relay was the last event of the night where Regis Jesuit found themselves with a number one next to their name for the fourth time on the evening.  Hennessey Stuart kicked it off with a blistering 44.11 lead off leg.  Chris Dawnson followed up with a 46.64 and then Mitchell Bruckman it the water with a 46.31.  Garrett Suter claimed the anchor leg with a 47.82, touching in an overall time of 3:04.87 which is just a hair off the state record.  Fairview and Cherry Creek picked up second and third with times of 3:08.21 and 3:08.36.

Finals will be held tomorrow starting at 2 PM mountain time.