Phelps Returns to Old Form in 400 IM in Indy 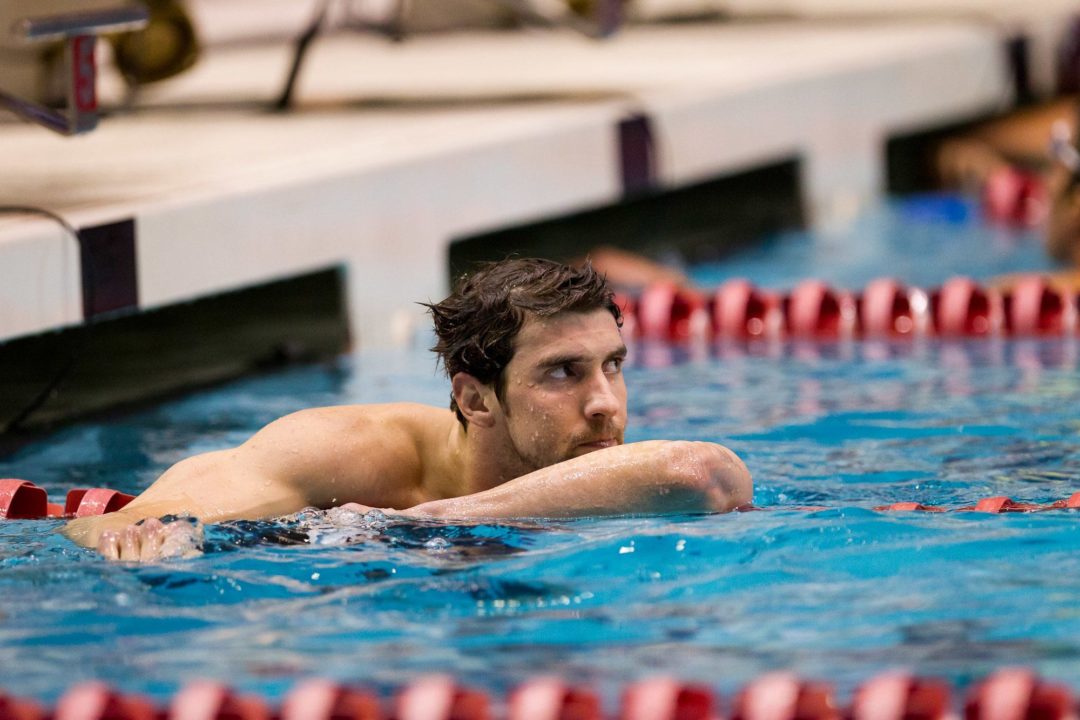 Don't let his post-race expression fool you. This was an outstanding swim for Mr. Phelps. (Photo Courtesy: ©Tim Binning/TheSwimPictures.com)

After the women shone on night 1 of the 2012 Indianapolis Grand Prix, it was the men’s turn on night 2. The evening kicked off with a huge throwback-swim by Michael Phelps, and continued to great sprints by Nathan Adrian and George Bovell (as well as a statement-sending swim from Anthony Ervin).

Michael Phelps of old is back. I’m calling it right now: he’s going to swim the 400 IM at the 2012 US Olympic Trials. His “I don’t know” when asked point-blank after the race pretty well gives it away. He outdueled a great race from Tyler Clary. Phelps went out in a very easy-looking 56 butterfly leg, fought through the backstroke, showed his improvements in the breaststroke to pull into the lead, and was pushed hard by Clary on the closing freestyle.

Phelps’ arms looked like they about fell-off on the last three strokes of freestyle, but he still touched in 4:12.51, which is the third-best time in the world this year. Clary moves to 4th in the world with a 4:13.01.

In Phelps’ own words, in “Long course, this is the race that really shows the kind of shape you’re in.” And he is in shape. This was a 10-second improvement from when he last swam the race in Austin in January, and though all of his times haven’t been awesome, this one was. The fact that he was slower than last year in the 100 fly shows how great this swim really was.

Phelps’ training partner Chase Kalisz took 3rd in 4:19.48, and Robert Margalis was 4th in 4:20.01. That shows just how far ahead of this Lochte-less field (he that is the defending World Champion) that Phelps and Clary were.

Phelps’ swim deserves the headlines, and rightly-so. But Katinka Hosszu’s swim of 4:32.83 that is the second-fastest in the world this year. That’s coming two-weeks after her NCAA Championship taper, where she swam the fastest yards time in history. For the former World Champion, this is the second-best swim of her career, and the fastest she’s been in textile by two seconds. After a rough long-course season last year, where she really seemed to take the summer off, Hosszu returned to big training in the fall in way better shape than she’s ever been in. Don’t count her out for Olympic gold in this race. It would be hard to pick against her for at least a medal after this swim.

Cal’s Caitlin Leverenz, runner-up at NCAA’s to Hosszu, looked very good in 4:36.46. She’s on the same timing as Hosszu, and this time is similarly-impressive for the number-two swimmer on the American depth chart. That time is the fastest by an American this year, and is faster than she was at last year’s World Championships. Thanks to some Teri-McKeever underwater work, her backstroke and butterfly legs looked pretty good in this race in a 25-yard pool, but over 50 meters she still needs a lot of work (especially the backstroke) to keep up with the world’s best.

Kathleen Hersey swam her best time in nearly four years to take 3rd in 4:43.42 – all-the-more impressive given that this is purely a training meet for her where she’s swimming tons of races. Fourth went to Hosszu training partner Stina Gardell in 4:43.61.

Perhaps in preparation for a matchup with Italy’s defending World Champion Federica Pellegrini (a great back-half swimmer), Allison Schmitt is really working on her closing-kick. This race was masterfully-done, with splits of 57.50-59.29. This 1:56.79 wasn’t her best time of the year, but it was more great work on pacing. If she can combine her closing speed with maybe a 56.0 (still slower than she went out at Worlds), she’ll be right in the range for a medal in London.

Missy Franklin was first to the turn, but couldn’t hold on coming off of some tough doubles in the Florida Keys this past week, and took 2nd in 1:57.97. I’d venture a guess that she and the Colorado Stars were putting in as much or more work than just about anybody coming into this meet, so strong times like these are extremely positive signs.

Dana Vollmer also took this race out hard – in fact half-a-second faster than she was in the morning – on advice of fellow National Teamer Katie Hoff. Vollmer said after this morning that Hoff gave her the advice “if you’re hurting anyway after the first 100 meters, you may as well go for broke”. That advice payed off, with Vollmer swimming a 1:58.19 for 3rd, which is the best that she’s swum since 2010. She dropped out of this race entirely for the 2011 World Championships, where she had earned a spot both individually and on a relay. I think she still probably doesn’t want to swim it individually, but she has to consider putting it back on for at least a relay swim, as it would be a cakewalk to an Olympic gold medal for her.

Katie Hoff (who might have a future in coaching) was 4th in 1:58.64, followed by a tie between 17-year olds Lia Neal and Chelsea Chenault in 1:59.59. For Neal, that’s the best time of her career. No other country in the world has the depth in this race that the Americans do, and that’s why they will dominate the 800 free relay at the Olympics.

A pair of South African standouts, both of whom train at Tucson Ford, Darian Townsend (1:47.46) and Jean Basson (1:47.94). For both swimmers, those are at-or-near their personal textile-best swims. As they’re beginning their taper to descend to the South African Olympic Trials, which begin in just under three weeks, they are feeling really good about those times.

The top-finishing American is Charlie Houchin, who seems to be doing very well for himself training in a more solo mode in Florida after leaving the FAST program in Fullerton, California a few months ago. This is the best time we’ve seen from him in two years in this race, though the 400 is still his money-race.

Both Joao de Lucca and Ryan Lochte scratched this final.

Missy Franklin, thanks to a huge third-50, put away the field in this 200 backstroke with a 2:07.97, which is her season-best time and moves her up to 4th in the world in 2012. That swim is just .01 from her time from this same meet last season, which shows that she is right on target to repeat her dominant 200 back win from last year’s World Championships with an Olympic gold medal in this race.

16-year old Kylie Stewart of the Dynamo Swim Club was the really impressive swim of this race, however. She swam a 2:10.61 for 3rd place, which is her lifetime best by over a second, which puts her as the 5th-best 15-16 in US history.

With what we’ve seen from Ryan Lochte thus far in the meet (great afternoon swims on Thursday, scratching the precursor 200 free for this race), one would have expected a big performance in the 200 back. And that’s exactly what we got…for 175 meters. He was more than half-a-second ahead of the rest of the field at the final turn, but in the last 25 meters just absolutely fell apart and ended up 4th in 1:59.34. Not that he’s ever great in-season, but that swim was particularly disconcerting at the finish, and was about two seconds slower than he was at this meet last year.

Meanwhile, Germany’s Yannick Lebherz (six weeks out of his country’s Olympic Trials) had sort of the opposite race. He was 3rd going into the final turn, but had a great closing 50 meters of 29.23 to take the win in 1:57.52  – the fastest he’s ever been in textile. Just behind him was 16-year old Ryan Murphy out of Bolles in Florida with a 1:57.82, which is second in 15-16 history only to the NAG Record of the great Aaron Peirsol eight-tenths faster.

Tyler Clary was DQ’ed for a false-start, and Eugene Godsoe was also DQ’ed for violating the 15-meter mark. Rex Tullius looked a far-cry better in the final than he did in prelims (and nearly bettered the time of his training partner Lochte) with a 1:59.40 to win the B-Final.

Madison Kennedy has made a huge breakthrough it seems in her short time at SwimMAC after leaving Cal. She swam a 24.99 to win the race in a lifetime-best swim that is also the fastest by an American this year.

Christine Magnuson nearly matched her prelims swim, and continued to look very good in this 50 free (at least as good as the 100 fly) with a 25.17 for 2nd. Florida’s Sarah Bateman also went a lifetime best in 25.31 (needless to say, two weeks after NCAA’s she’s in a much different place than most of the swimmers coming out of Gainesville). She was one of the few Gators (of either gender) to outperform at NCAA’s, and has carried that over into long course. Lara Jackson was close behind in 25.32, followed by Liv Jensen in 25.37.

Dara Torres was a touch slower than she was in prelims, with a 25.47 for 6th.

Jessica Hardy had three very rough swims to start off this meet; number four, however, was the charm, as she won the B-Final in 25.04 that temporarily was the Meet Record (until Kennedy broke it shortly after). That’s her best time of 2012. It’s good to see that she’s shaken off the funk she was in to begin this meet.

This race was a highlight of where all of the American sprint power lies on the men’s side. The top 11 finishers in this men’s 50 free included four from SwimMAC, three from Cal Aquatics, and two from Club Wolverine. Those are the top three men’s sprinting programs in the country right now.

Cal’s Nathan Adrian (no problems with the suit this time) took the win in 21.88, with George Bovell just a fingertip behind in 21.89. That ranks Adrian tied for 4th in the world in 2012, and Bovell one spot behind in 6th. Bovell has been swimming extremely well in Ann Arbor, and this is the big payoff.

A ways back was Anothny Ervin in 22.24. Not only is this the best time of his comeback, but it’s the fifth-fastest swim of his life.

Ok, I recognize I didn’t see that swim coming from Michael Phelps in the 400 IM. He said it’s the fastest time he ever swam in-season. Just a thing, he won the 400 IM in Austin in 4.16.95. But more than 4 seconds of improvement is impressive. Braden, how can you be sure that he’ll swim this race at the trials? I think it’s not the problem of Tyler Clary. He’ll destroy him but he will not go to London to finish second. If he thinks he’s sure to win I think he’ll swim. If he thinks it’s a problem for his next races he will not swim. If Michael is able to swim under 4.06 this summer I think… Read more »