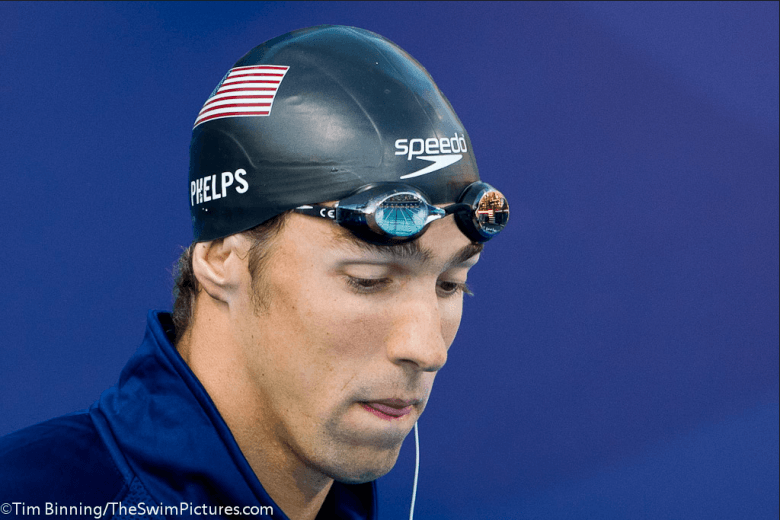 Coach Bowman wouldn’t commit to whether or not he would swim either event, but we now know at least that he’s entered in both of those races.

Later in the morning, the plot got thicker, as Yahoo Sports’ Pat Forde (a bit of a swim buff himself) reported that Phelps would also be entered in the 200 backstroke, giving him a full individual entries at trials.

Back to Garrett, Bowman told him that some of these events could be for a “worst case” scenario, with perhaps an event thrown in at the end of the week in case the beginning of the week doesn’t go well. But with the 400 IM coming at the very beginning of the schedule, it wouldn’t necessarily fit into that category.

The 200 backstroke might throw some for a loop, but it’s not a bad backup event for Phelps either – His 1:54.64 in the race is the 6th-fastest time in history, despite him never swimming it at the Olympics.

Check out the interview with Garrett – we learned a lot more about the tapers of Michael Phelps and Allison Schmitt than maybe anybody’s ever gotten in the past, and also got Bowman’s best explanation for why event secrecy is so important to him and his athletes.

WHATTT? Haha this really threw me for a loop. Unfortunately I don’t think we’ll have any surprises once trials gets going. Phelps will (hopefully) swim somewhere around 48.0 in the 100 free prelims, giving him a sure spot on the relay. I think he’ll go on to swim well in his 5 individuals, giving him the same lineup he had in London. It would be awesome to see him swim 200 back in London – I think if he’d concentrated on it for the past couple years he could seriously contend for the gold (as his 1:54 suggests), but with 8 events looming later this summer he’ll surely withdraw from it.

There is no way Phelps will go a 48 seconds flat in the 100m freestyle. In fact, he will be lucky to break 49. The guy is not a sprinter; his career-best 47.51 was achieved at the Olympics when he was wearing Speedo`s version of the super-suit. Magnussen will absolutely destroy him in the lead-off to the 4 X 100m free relay, and it will be beautiful to watch.

Is Phelps even capable of going under 23 seconds in the 50m free? I am pretty sure Ranomi Kromowidjojo would give him a run for his money in that event.

Ha yeah I wonder how long this guy’s been detatched? Phelps will definitely swim 47 something this summer leading off the relay, the only question is how low of a 47 he’ll swim. Of course he probably won’t beat Magnusson, nobody’s saying he will. The important thing is for him and 2 other guys to put the USA in a position for Adrian to bring it home, which will be a long shot but still possible, and a lot of fun to pull for.

I wonder where are now those people who only few months ago criticized me for even daring to say that Phelps would swim 400 IM.

I was one who doubted Phelps would swim the 400 IM in London, largely based on what it takes to get into form for the race and its potential impact, at age 27, on his other events, especially the 200 free. That’s no criticism of anyone who suggested he might. We still don’t know what he’s going to swim next week….only the range of possibilities.

He said in an ESPN interview after the Longhorn Invite that that was the last time he’ll ever swim 400IM.

i still doubt he swims the 400 im. maybe he wants to swim the 200 back to be on an even playing field with Ryan’s double of 2back/2im?

Phil,
After Beijing he also said he would never swim 400 IM competitively again.

It’s all on record.
google it.

Still doubting it man,
I’d give it 50/50 at trials (which is far more likely than I thought just 3 months ago), and a fraction of that in London.