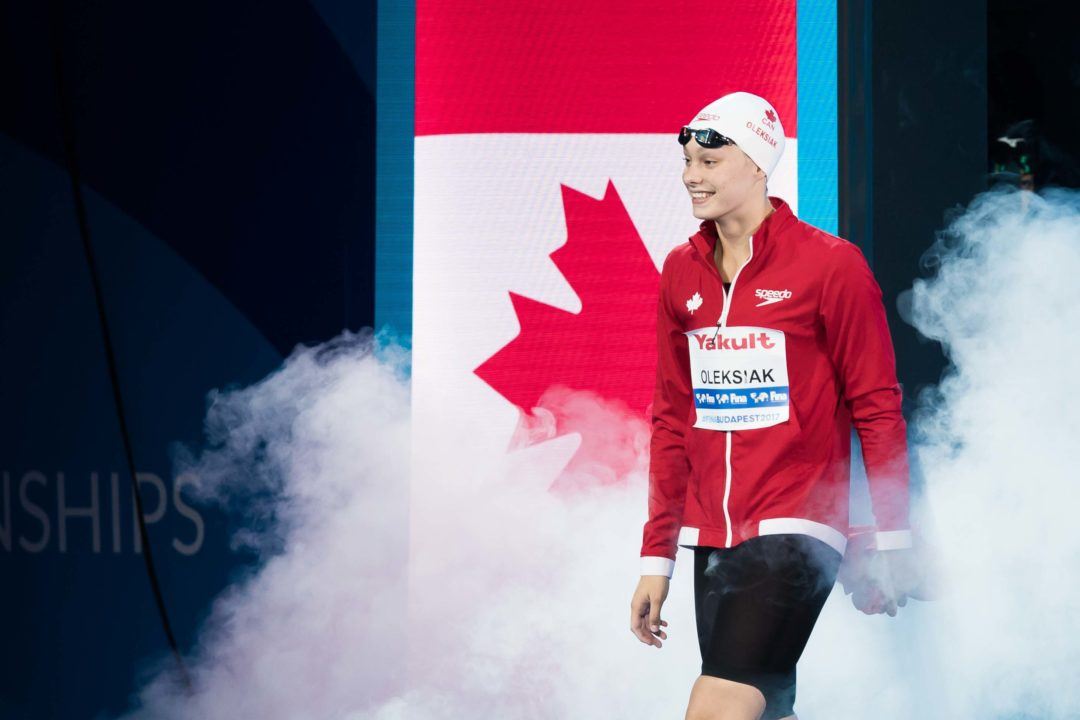 Four-time Olympic medalist Penny Oleksiak will rejoin her home team, the Toronto Swim Club, after two successful years training under Ben Titley at the High Performance Centre – Ontario. The news was announced by Swimming Canada this morning via press release.

She will be back under the tutelage of TSC head coach Bill O’Toole, who coached Oleksiak as an age-grouper up until the end of the 2014-15 season. Under O’Toole, she won six medals at the 2015 World Junior Championships before joining the HPC for the Olympic year.

“I’m excited to be returning to the Toronto Swim Club to continue my training and I look forward to future collaborations with coach Ben Titley as I prepare for Tokyo 2020,” Oleksiak said. “I would like to thank the people at the High Performance Centre – Ontario, and in particular my head coach, for their invaluable contribution to my successes these past two years.”
“I’m very excited to be working with Penny again,” O’Toole said. “We have always had a great relationship and shared in many successes. I am looking forward to working with Swimming Canada to advance Penny’s career on the international scene.”

“Swimming Canada Senior Coach Martyn Wilby and I are already visiting Toronto in September and we will now work on planning for Penny with her coach Bill and help develop her plan,” Atkinson said. “We know Bill very well. Swimming Canada and I have worked with Bill in the lead up to the World Junior Championships in 2015, and on coach development programs. We have a great working relationship with Bill.”

Titley spoke about the great success they’ve had over the last two years, and that his door will always remain open to support Oleksiak as she progresses.

“Penny is a great athlete and we achieved great things together in the Swimming Canada High Performance Centre – Ontario. I would like to thank all those who have made the last few years of Penny’s swimming so successful, including her current and past teammates, and the staff here at the HPC-O,” Titley said. “I wish her and her coach all the best. I look forward to working with them on national teams and know she can do great things in the future. My door will always remain open to supporting this young woman as she progresses.”

Despite the departure of Oleksiak, the HPC – Ontario remains stacked with talent, with two-time Olympic medalist Taylor Ruck recently joining the team that already featured Olympic medalist Michelle Toro and 2017 World Championship team members Kayla Sanchez and Rebecca Smith. Ruck, Sanchez and Smith teamed up with Oleksiak at the recent World Junior Championships to go 3-for-3 on the female relays, all in junior world record fashion.

Good for Bill. He’s an excellent coach, and IMO never got enough credit for the work he did with Penny pre 2016. Titley got all the credit for her success, but Bill was a huge part of her development. Nice to see that he’ll get a chance to work with her again.

When Taylor leaves next year for Stanford the cupboard will be a little bare in Toronto.

From what I’ve heard, the HPC also has at least one 12-year-old in the group, and it’s likely that at least one of the adults will stick around for at least a couple more years. Penny also did say that she intends to still collaborate with Ben Titley in the future. That could very well mean she’ll at least occasionally train at the center.

It’s great to learn of the collaboration the two coaches will share to prepare this great athlete for Tokyo. Often times when there are transitions like this (referring to non-Olympic athletes like Penny) some coaches tend to cut off the athlete switching teams. I switched teams to go to one with older kids (I am 16 and was swimming with mostly 12 years olds) and my old coach really hasn’t gotten over it. I understand the hard work that goes into training an athlete and don’t judge it. I am just saying it would be nice if people just worked together. There are a lot of personal reasons why swimmers switch teams that don’t really have anything to do with… Read more »

Does everyone think that pulling a kid out their home environment and sending them to national team training centers is a good idea?

The other thing I was wondering is that if she is NCAA eligible or she is already turned pro.

Well she already lived in Toronto and trained at TPASC with TSC so she isn’t being “taken away from her environment”
She already turned pro as she signed with asics (an athletic wear company) but Canadian universities aren’t as strict for pro athlete so im not sure wether or not she can swim for anyone.

Maybe not the case in this situation – everyone is being polite, at least on the surface – but I’ve always felt like the decentralized nature of USA Swimming – not to mention all the college and HS programs – is a real strength. Can’t but think that the push towards national training centers in Canada and elsewhere is more about ego than anything.

the high performance training center is in Toronto too, so I don’t think she had to leave her home environment.

Some people who live downtown Toronto go their entire lives w/o going to Scarborough.

Simon & Garfunkel wrote about those ppl . S&G were the Olympic medley champs till the memories of their HPC teenage years broke thru .

Will vary from country to country AND on the relative infrastructure the sport enjoys in that country. In smaller/more compact countries; such an approach can make sense and also with smaller sports where there may be only limited suitable training facilities present. In larger countries with the size/population spread of the US, it generally doesn’t make any sense except in the cases of smaller sports. Likewise in AUS, with its large distances involved, so the major training groups/facilities are centred in/around the major cities. Evan CHN operates on a more regional basis than a centralised basis when it comes to swimming. In CAN’s case, it has the geographic spread but less infrastructure so its seems they are operating on a… Read more »