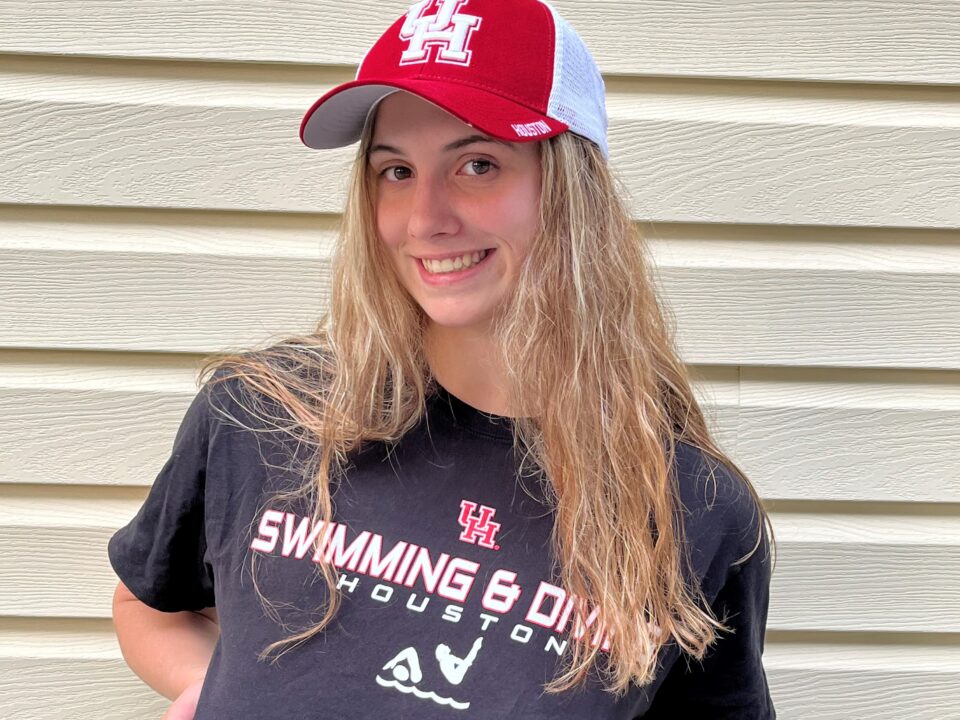 Megan Unruh, an A-finalist at the Pennsylvania High School 3A State Championships (big schools), has announced her verbal commitment to swim and study at the University of Houston. Unruh will graduate in 2023 and is set to arrive in Houston in time for the 2023-2024 season.

I’m super excited to announce my commitment to the University of Houston! I chose Houston because of the supportive staff and team. It felt like home as soon as I stepped on campus.

Unruh currently attends Exeter Township High School. She also trains and competes with the Boyertown YMCA. She is primarily a mid-distance freestyle specialist, although can be quite versatile across all four strokes and IM events. She currently holds Winter Juniors qualifying times in the 200 and 500 yard freestyles, as well as Futures cuts in the 50 free, 100 back, 200 back, 200 fly, 200 IM, and 400 IM.

At the 2022 PIAA Girls 3A (larger schools) State Championships, Unruh competed in the individual 200 and 500 yard freestyles. She was also a part of Exeter’s 400 freestyle relay. She had a very successful meet, setting new best times and qualifying for finals in every event. In the 200 free, Unruh qualified 4th in prelims with a 1:50.87. In finals, she was over 2 seconds faster, posting a 1:48.81 and finishing 3rd. This was a .7 second drop from her previous best time of 1:49.51.

Unruh finished 3rd in both prelims and finals of the 500 free, setting a new personal best with each swim. In prelims, she went 4:56.55, dropping over a second from her best which was set the previous weekend at district champs. Then, in finals, she took off over 4 more seconds to finish in 4:52.06. Unruh led off Exeter’s 400 freestyle relay in 51.36, leading them to a 7th place finish.

The University of Houston currently competes in the American Athletic Conference (AAC). However, Houston is one of three AAC schools that is in the process of transitioning to the Big 12 conference. The move is scheduled to take place in the summer of 2023, ahead of Unruh’s first season with the team.

In 2022, the Houston women won their 6th straight AAC Conference Championship. They finished with 866.5 points, coming in only .5 points ahead of second-place SMU, marking the tightest finish in conference history. The 2021-2022 season was Tanica Jamison’s first year as head coach. Jamison was able to lead the team to another conference championship, despite losing a number of athletes from the previous championship teams as they followed Houston’s previous coach, Ryan Wochomurka, to Auburn.

When Unruh arrives on campus in 2023, she will be joined by Evelyn Entrekin, Nora Hetyei, and Sydney Nethercutt.