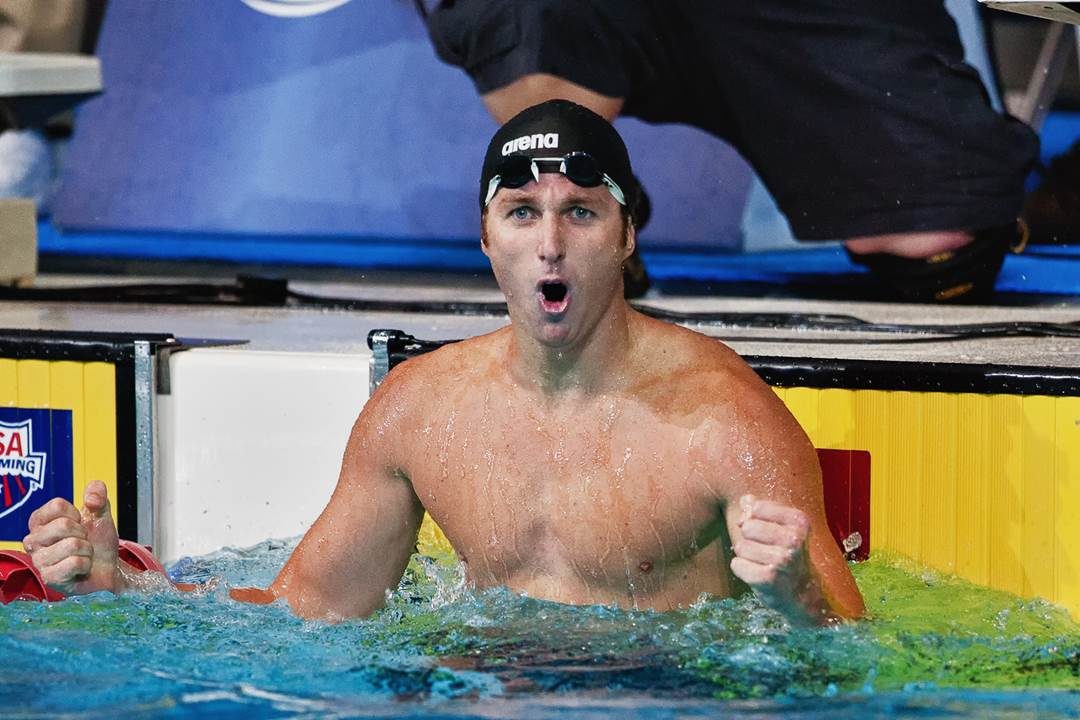 Peirsol was the king of backstroke from 2001 to 2009, though in 2007 and 2008 Lochte was better at the 200 backstroke, and even pushed Peirsol in the 100. Current photo via Tim Binning/TheSwimPictures.com

The United States has a tradition of Olympic dominance in both men’s and women’s backstroke. In years past, the 3rd and 4th-place finishers in either the 100 or 200 backstrokes at US Olympic Trials have now and then posted fast enough times to medal in the following Olympic Games–if only they had been faster than at least two other American swimmers.

While this article focuses exclusively on American men’s backstroke during a specific point in time (2000-2012), Team USA’s women have and continue to be equally-impressive in the backstroke.

For several years, roughly spanning 2006 to 2009, Ryan Lochte and Aaron Peirsol were the American men that shared the podium in both the 100 and 200 backstrokes.

At age 17, Peirsol won the Olympic silver medal behind American teammate Lenny Krayzelburg at the Sydney Games in 2000. Krayzelburg also won the 100 backstroke and was a member of the champion 400 medley relay in Sydney. The following year would see the torch passed on to Peirsol.

Though better known as a 200-meter specialist, Lochte was for a time Team USA’s second-fastest 100 backstroker. Though Michael Phelps never seriously swam the 100 backstroke, there’s an argument to be made that if he had he could have perhaps added a 9th gold medal to his tally in Beijing after posting a 53.01 to win the National Title in 2007 within an hour of winning the 200 freestyle. Phelps admittedly glanced at the scoreboard to see his split during the race, which could have made for the 0.03 difference between his time and the then-World Record of 52.98 set by Peirsol in March at the 2007 World Championships. In any case, Phelps did not pursue the backstroke as an event at the World Championships or the Olympics whereas Lochte did.

Lochte won the 200 backstroke at the 2007 World Championships, beating Peirsol in the pool and lowering his two-year-old World Record to a 1:54.32.

Peirsol one-upped Lochte at the 2008 US Olympic Trials in Omaha and tied his World Record, besting Lochte by a mere 0.02.

Peirsol and Grevers won gold and silver, respectively, in the 100 backstroke at the Beijing Olympics, Peirsol doing so in World Record fashion. Grevers would go on to swim the prelims of the 400 medley relay which Peirsol would lead off in the finals, securing another gold medal for Team USA and the 8th medal overall for Phelps at those Beijing Olympics, setting World and Olympic Records in the process.

Lochte, however, bested Peirsol in the finals of the 200 backstroke to win his first individual Olympic gold medal, taking the World Record into previously-uncharted territory with a 1:53.94. Peirsol took silver in 1:54.33, nearly tying he and Lochte’s co-record but falling short of defending his 2004 crown.

At the 2009 World Championships in Rome, Peirsol dominated the 200 backstroke, winning gold in 1:51.92. Lochte would take bronze with a 1:53.82, falling also to Ryosuke Irie (1:52.51) of Japan, who up until that race was the World Record holder, having taken it from Peirsol in the time between US World Trials and the big show in Rome. Peirsol did not advance to the ‘A’ final of the 100 backstroke in Rome and conceded his crown to Japan’s Junya Koga (52.26).

The 2010 Pan Pacific Championships in Irvine, California, was Peirsol’s final international meet. Peirsol ended his career with gold medals in the 100 backstroke and finally the 400 medley relay, helping the United States to gold.

Though Peirsol remained dominant in the 100 backstroke at the 2010 Pan Pacs, Lochte was again the star of the 200, winning gold in 1:54.12. Peirsol, however, did not advance to the ‘A’ final, and the silver went to fellow American and 2012 Olympic gold medalist Tyler Clary in 1:54.90. Furthermore, Peirsol was very fortunate to have the opportunity to swim in the ‘A’ final of the 100 back; of the four American men that swam the race in Irvine, Peirsol was only the third-fastest among them after the prelims, being out-done by Lochte and David Plummer. Lochte scratched from the finals of the 100 back to focus on the 200 freestyle, which he won by nearly a second.

Clary won individual gold in the 200 back at the London 2012 Olympics, leaving silver to Japan’s Irie and bronze to Lochte. American duo Grevers and Nick Thoman won gold and silver, respectively, in the 100 backstroke, and each earned gold medals for the 400 medley relay, which Grevers led off in the finals.

Lochte’s victory in the 200 backstroke at the 2008 Beijing Olympics cemented his place in history and proved that 2007 wasn’t a fluke.

Some miscellaneous thoughts: Rude to leave Krayzelburg off a list of American backstrokers 2000 – 2012. Worth noting that Ryosuke Irie never officially held the 200 back WR, as he swam his time in a non-FINA approved suit (even though it was a legskin). Kinda BS that they approved some polyurethane suits that year, but not others, but hey that’s FINA for you. MP never swimming backstroke at Worlds/Olympics, not even in that experimental 2005 Championships, makes me sad. Would have been great to see. American backstroke dominance (at least on the men’s side) is only now starting to falter, after over 20 years of absolutely owning it. Makes me wonder what has made the USA so dominant in backstroke… Read more »

Didn’t Larkin win both Backstrokes in 2015 ? But I see what you’re saying kind of

Backstroke benefits from great turns more than any other stroke. The Americans have awesome turns, probably due to short course focus for half the year right up until they’re 22.

Reasons for USA backstroke domination:
1. While Irie and others swim a “pretty” backstroke, for USA swimmer, backstroke is a kung fu fight. Violent strokes and pull.
2. Backstroke is all about stroke and stroke rate, except when it isn’t. USA swimmers dominate underwaters, which are very very important, even in long course.
3. Technique: Very little hip rotation, no shoulder over-rotation, shallow and straight pull.

Vote Up7-1Vote Down Reply
Hol Up

He could have done the 400 tho. He never really focused on it, but if he did, he could have threatened the WR

Honestly…Thorpe’s 3:40 might be Mount Everest…but honestly who knows what Phelps could have gone. If Phelps hadn’t chosen to swim the 200 free, we all might think the same thing that there’s no way Phelps could break 1:44

(Biedermann’s WR is Mauna Kea in that example. Sure, it’s technically taller from its base, but no one actually cares)

He had the American Record in the 400LCM for a hot second.

I was going to say that. He set it at summer nationals in Maryland in the early 2000s. I was in the stands.

I was in the stands too! Su ch a great experience for me as a young swimmer, and instrumental in me choosing to go to UMD later.

I always thought we missed out on Phelps and the 400 free. If only it wasn’t the same day as the 400 IM. Given his 200 free and 400 IM times in his prime and how fast his 500 free was as an 18 year old, you have to think he could have rattled that record. Especially knowing it was Thorpe’s record. I’m mildly surprised he never gave it a shot.

Fun article to read ! Thanks 🙂