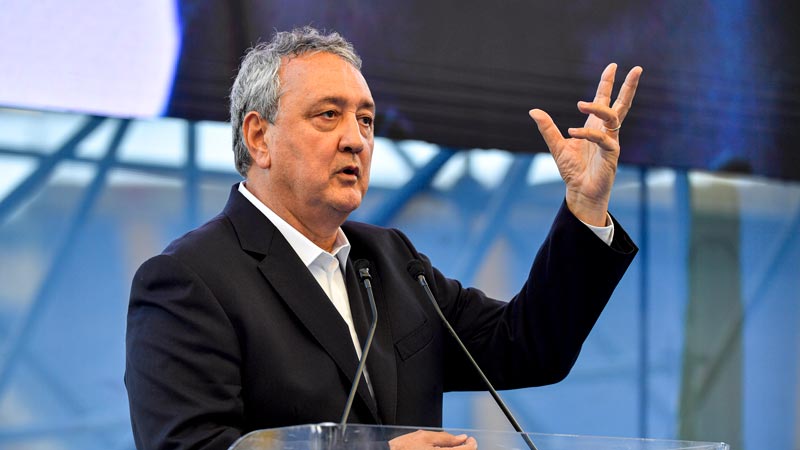 Barelli remains the president of LEN for another 4 years - a role he's held since 2012. David Sparkes was re-elected General Secretary as well. Archive photo via Giorgio Scala/DBM/Insidefoto

LEN, the governing body for aquatic sports in Europe, held its 2020 Congress remotely last week due to the coronavirus pandemic, which included re-electing Paolo Barelli as president. This marks the Italian’s 3rd four-year term that will keep him in office through the Paris 2024 Olympics.

Barelli received 86 out of 99 votes ahead of the other candidate Gilles Sezionale of France.

“Even if we came together only on the web, this Congress was once again the celebration of our unity and a sound approval on everything we have achieved so far” Paolo Barelli said after his re-election. “In the past years, European Aquatics enjoyed a really successful period and the benefits were significant. We were able to share those with our National Federations offering them financial support and with our athletes who could earn ever-growing amounts of prize-money at our events. They are the frontrunners in this success story, they deserve all credits for making Europe the No. 1 continent in aquatics.”

For the first time, 100% of the 52 LEN Nations participated in the call.

David Sparkes of Great Britain will remain as General Secretary of LEN, a position that he’s held since 2012. Those re-elections come after Sparkes and Barelli were reported to European authorities on allegations of financial malfeasance within the organization.

Spain’s Fernando Carpena was appointed the new LEN Treasurer, replacing embattled Hungarian Tamas Gyarfas. Gyarfas is currently undergoing legal proceedings in Hungary on accusations that he ordered the murder of a media rival in the 1990s, but LEN and FINA would not accept his resignation until after the conclusion of legal proceedings.

He remains a member of the FINA Bureau and was elected as an Honorary Member of LEN at the meeting, alongside outgoing vice-president Christa Thiel of Germany.

Carpena is the president of the Royal Spanish Swimming Federation.

LEN has also named 5 vice presidents, which includes 2 women for the first time in the organizaiton’s history.

Among those, Camelia Potec and Aleksandar Sostar were Olympic champions and Tunde Szabo was an Olympic silver medalist. Potec won gold in the women’s 200 free for Romania at the 2004 Olympic Games, Sostar was a goal keeper on the 1988 Yugoslavian Olympic men’s water polo team, and Szabo won Olympic silver in the 100 back at the 1992 Olympic Games for Hungary.

Barelli, Sparkes, Carpena, and Diathesopoulos will represent Europe in the FINA Bureau from 2021, with 2 more European candidates to be elected at the FINA Congress next June.