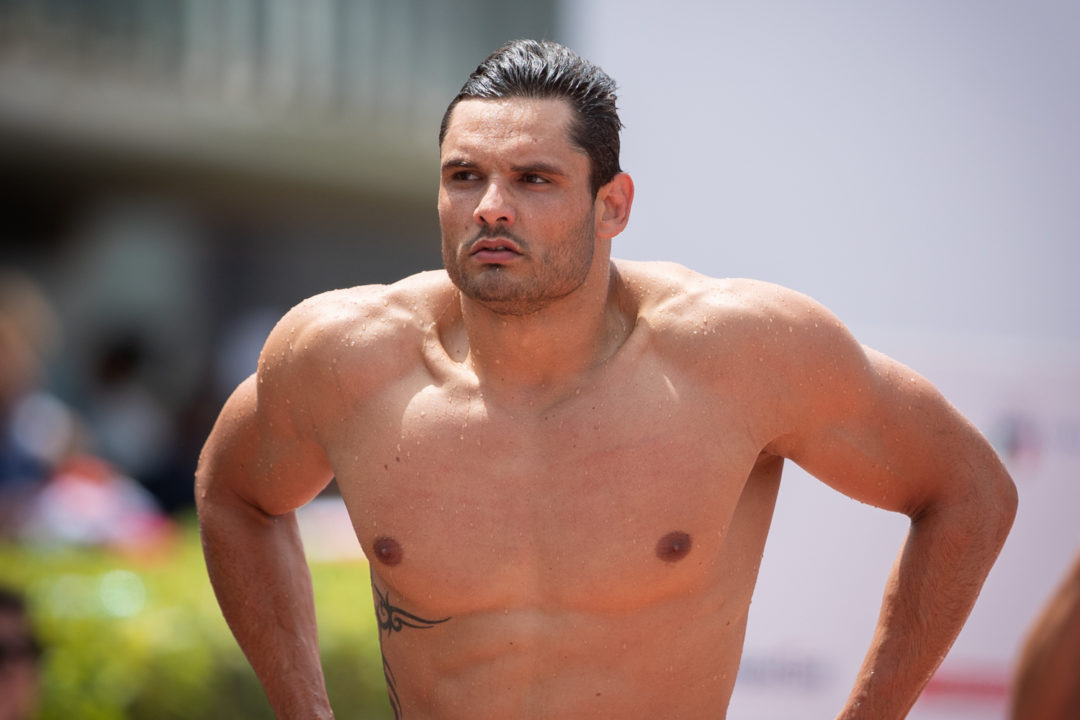 Manaudou had planned to train for Tokyo with Energy Standard head coach James Gibson in Turkey, but politics and pandemic travel difficulties changed that. Archive photo via “Rafael/Domeyko Photography”

As the road to the Tokyo 2020 Olympic Games becomes shorter, French Olympic champion Florent Manaudou has chosen to train in Marseille, citing travel difficulties caused by the coronavirus pandemic and politics.

Now, he will train at CNM alongside Danish Olympic champion Pernille Blume who also competed for Energy Standard last season. Blume and Manaudou have known each other on the Olympic stage for many years, but began posting to social media as a romantic couple last year.

In an interview with RTL, Manaudou explained his decision to solely train in Marseille. “The pandemic and uncertainties about travel, plus the tensions that exist between Erdogan, the Turkish president, and France have tipped the scale for Marseille,” he said.

RTL reported that Gibson “understood his decision perfectly and the two men ended their collaboration on good terms.”

Manaudou is familiar with training with coach Jacquier in Marseille. In 2015, he released a three-part Youtube series that followed his daily life while training at CNM with other French national team members before the 2015 FINA World Championships in Russia. There, he took home a total of 2 gold medals in the 50m fly and 50m free after out touching the American record-holder at the time, Nathan Adrian, in the 50 free.

30-year-old Manaudou has had an extensive athletic journey over the past 9 years alone, going from Olympic swimming champion to a member of the Aix handball team during his 2-year post-Rio hiatus, and then he returned to swimming officially in 2019. He had an earlier ‘comeback’ after he suffered from a shoulder injury in 2013, and then broke 2 world records at the 2014 World Short Course Championships in the 50 free and 50 back. In his 2019 return statement, Manaudou wrote that he planned on training with Energy Standard in Turkey up until the Tokyo Olympics.

Manaudou added onto his interview with LaProvence on Instagram, saying, “In Marseille, I am well in my head, there is my family, my friends, and a training group at the Cercle de Nageurs which is the best in France.” Manaudou and Blume reportedly had their first training session with CNM on Saturday.

Coach Jacquier is also optimistic about this endeavor, as he told RTL on Sunday, “We will try to go and win an Olympic title together.”

During the 2020 ISL season, Manaudou posted some of the top times of the season in the 50 free, 100 free, and 100 IM. Blume was primarily a relay swimmer for the team, where she alongside Siobhan Haughey, Femke Heemskerk, and Sarah Sjostrom swam a “world best” time in the 4x100m freestyle relay.

At the 2016 Rio Olympics, Blume claimed gold in the 50m freestyle, simultaneously breaking the Danish Record. Manaudou won silver in the men’s version of the event, adding to the silver medal his 4x100m freestyle relay claimed earlier.

I call it BS, there must to be more to it.
Sure that manager scramble with the ISL had absolutely nothing to do with it??

Well that would be a civil & commercial matter. However the political angle is real for Manadou as he is French military.

I’m pretty sure he left the french military around 2017. He had two 3 year-long contracts, the second one started in 2014. Plus he didn’t participate in military competitions since 2017 and he “had to swim” for the Armée de Terre as part of his contract. In 2017 he swan without training (and won every race he had), even though he had already switched to handball for several months and hadn’t really swam since Rio.
So i don’t think the political angle has a real impact in this decision (at least not from a military view point)
Imo this decision is pretty smart, he’s choosing stability and an environment in which he’s done great things. For a quick… Read more »

I’m thinking about that too. The GM who resigned from Energy is Manaudou’s manager right?

Well both reasons given for the change of plans are legitimate and completely understandable so if there are other factors in the decision that is none of our business. If there has been some fallout due to ISL broken promises it shows Manaudou’s class that he isn’t talking publically.

Manaudou has a very good chance this summer if the Olympics go ahead. He is clear second favorite and there is a reasonable chance he can get an upset over Dressel in a one off – unlike skins where frankly he is doomed to be battered in round 3 everytime.

Boring reply, this is SwimSwam’s comment section, give us something a bit pettier and even a bit bitter.

The article says “some of the top times”. There’s a link too.