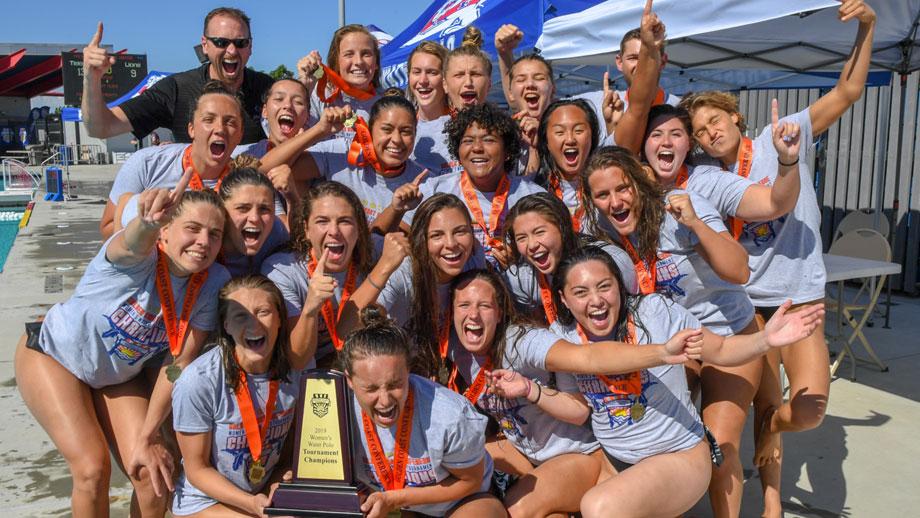 FRESNO, Calif. – In a rematch of last year’s Golden Coast Conference title match, the No. 1 seeded Pacific Tigers pulled off a 13-9 win against No. 3 LMU on Sunday at Fresno State Aquatic Center.

The Tigers earn their third straight GCC Championship and end the conference tournament with a record of 17-8, 7-0 in conference. LMU finishes their season with an overall of 21-10, 6-1 in GCC play.

Following their win, Pacific clinches an automatic bid to this year’s NCAA Championships. UOP awaits their seeding for the tournament tomorrow in the NCAA Selection show at 5:00 PM.

Pacific vs. LMU (GCC Championship Round) – In Case You Missed It:

The match would be highlighted by GCC Player of the Year Kyra Christmas as the Calgary, Alberta native recorded five goals to claim her second tournament MVP honors. Christmas provided a late spark to give the Tigers the cushion they needed tallying two goals late in the fourth to put her team up 13-8 with just under two minutes to play.
The Tigers would snag a 5-1 lead over the Lions early on in the match. Truly Dorland scored two of her three goals on the day in the first nine minutes of the game shifting the momentum in favor of UOP.
LMU would go on a run of their own after a 9-5 UOP at the break. The Lions came as close as a two-goal margin, 9-7, with 3:01 left to play in the quarter but Pacific would keep them at bay adding three in the final frame to pull away.

Up Next For the Tigers:

FRESNO, Calif. – For the second straight season, the Golden Coast Conference Championship Sunday featured LMU and Pacific battling for the conference crown. Despite an early UOP surge, the Lions continued to battle and remain close, but came up short to the three-time reigning champions, 13-9.

Marialena Seletopolou provided an early response to Pacific’s first goal of the title game, evening the score at 1-apiece at the 5:41 mark. The Tigers then closed out the period to take a 4-1 lead into the second quarter.

After UOP extended their lead to 5-1, Seletopoulou again scored to snap the top-seeded Pacific’s run. Abbey Grosse followed by finding senior Katie Hungerford less than a minute later to make it a 5-3 game with 4:12 to play until the half. The Tigers added two consecutive goals before Hana Vilanova converted a powerplay opportunity for her first goal of the day. With Pacific adding two goal in the final two minutes, LMU capitalized with one second remaining before the half with another Vilanova goal.

Vilanova continued her strong play with two consecutive goals to open the third quarter, a personal 3-0 streak continuing back to the first half. After LMU cut it to a two-goal game, UOP added one back making it 10-7 heading into the fourth quarter.

Seletopoulou scored both of LMU’s fourth quarter goals, but Pacific’s three made it a 13-9 final.

Sky Flores made 12 saves in goal for the Lions, her third-largest total of the season.

Following the conclusion of the game, the GCC announced the 2019 All-Tournament team. The Lions were represented by the senior pair of Hana Vilanova and Sky Flores. The complete team is listed below.