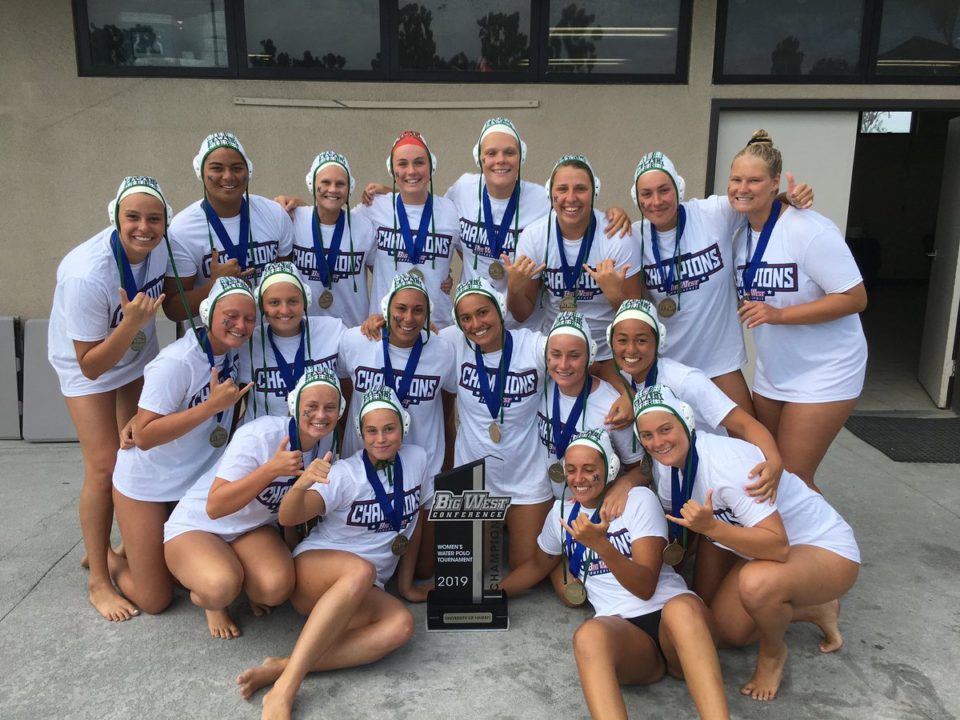 With the win, the Rainbow Wahine (18-5) earned an automatic bid into the NCAA Tournament held in Stanford, Calif., on May 10-12. They will make their first appearance since the 2015 season.

Senior All-American Irene Gonzalez was named Tournament MVP after scoring six goals in the semifinals and once in the Championship Game.

In the opening period, the Anteaters (19-7) scored in the first goal of the game before the Rainbow Wahine poured in three straight goals from Elyse Lemay-Lavoie (2) and Gonzalez (1). The Anteaters responded, connecting on a late goal to close the frame.

As the second period started, UC Irvine strung together a pair of goals to take a 4-3 advantage at the 5:32 mark. In the ensuing UH possession, freshman Maxine Schaap skipped in a goal to stop a 3-0 scoring run by the Anteaters.

With the score knotted at four-apiece, Hawai’i started the third period looking to make a statement on both ends of the pool. Defensively, the Rainbow Wahine blanked the Anteaters in the period, holding them to 0-7 shooting. UH took full advantage as Lemay-Lavoie zipped in her third goal of the game, while Carmen Baringo and Femke Aan each tallied one goal.

In the final eight minutes, the Anteaters put through one goal to keep the ‘Bows in reach. On UC Irvine’s last possession, they fired a late shot but Layburn’s save sealed the Hawai’i victory.

In the cage, Molly DiLalla got the start in the first half, recording six saves and five goals against, while freshman Bridget Layburn, put together 10 saves and one goal against in second half action.

The Rainbow Wahine will find out their opponent as the NCAA selection show will be broadcasted on NCAA.com on Monday, April 29 at 8:00 p.m. ET (2:00 p.m. HT).

INSIDE THE NUMBERS
> Kayleigh Schultz led UCI with two goals
> Mary Brooks, Sarah Nichols, Toni Shackelford and Tara Prentice each finished with one goal
> Morgan Jones had seven saves and a steal in goal
> UCI outshot UH 37-21 and Brooks won all four sprints
> Neither team fared well in extra-man situations as the Anteaters went 0-6 and the ‘Bows were 0-5
> Elyse Lemay-Lavoie tallied a game-high three goals for UH. Molly DiLalla and Bridget Layburn each played a half in goal as Layburn closed out the game making 10 saves

QUARTER ONE
> Prentice got the ‘Eaters on the board first with a goal at 4:56
> UH answered scoring back-to-back goals to go up 2-1 (2:06)
> The ‘Bows’ Irene Gonzalez tallied another to give UH a 3-1 lead with less than two minutes to go
> Schultz fired in a goal from five-meters as time expired to make it 3-2

QUARTER FOUR
> The Anteater defense shutout the ‘Bows in the fourth quarter
> Sarah Nichols scored with 1:46 to play but UCI ran out of time and UH earned the narrow victory