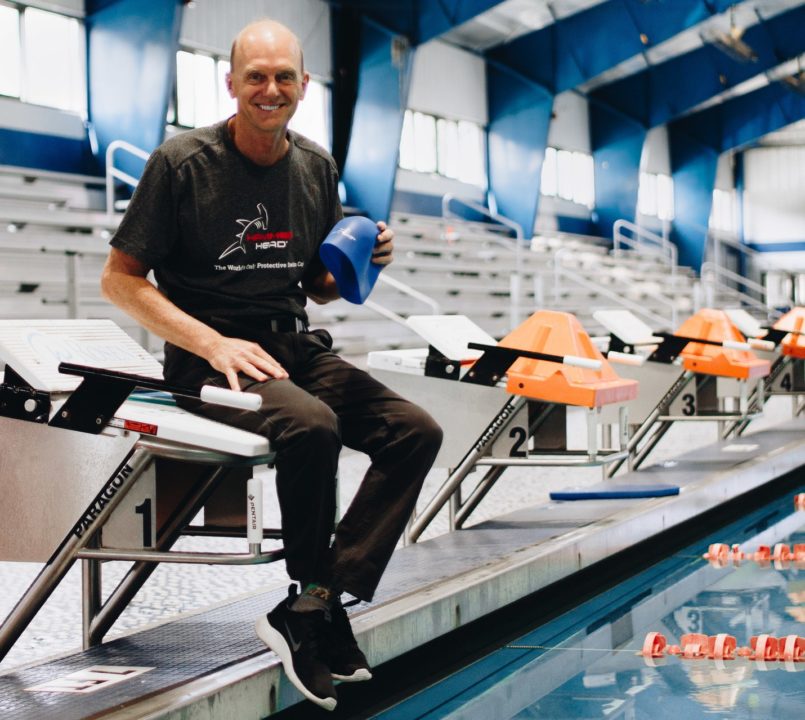 There’s no more recognizable expert in the world of competitive swimming than Rowdy Gaines. Olympic champion Mel Stewart met up with the three-time Olympic Gold Medalist and NBC Swim Analyst to catch up and discuss Rowdy's recent endorsement of the Hammer Head Swim Cap.

GMM: You’ve been involved in swimming for more than 30 years. What’s changed in that time?

Rowdy: So much. Strokes have evolved and speeds have increased, and new equipment and technology continues to be introduced to the sport. I see young competitive swimmers today and know the bar is constantly being raised with hard work, attention to better nutrition, determination and talent. Swimming is experiencing an absolute boom in popularity too thanks to names like Missy Franklin, Michael Phelps and Katie Ledecky and their incredible achievements. That means clubs are growing fast and practice lanes have become very busy places to be. It makes for a healthy future for the sport, but it also creates additional concerns.

GMM: What do you mean concerns? What worries you about swimming today?

Rowdy: Concern for athlete head safety just hasn’t evolved at the same pace as it has in other sports. There is a worldwide movement going on in football, hockey and lacrosse, and with the professional governing bodies focusing on things like head injury prevention and concussion awareness. That’s gaining momentum in swim but many don’t think of swimming as a contact sport. It absolutely is. And we need to do more to protect aquatic athletes in the water.

GMM: Is that why you recently endorsed the Hammer Head® Swim Cap? Why did you get involved?

Rowdy: I really loved the idea as soon as I heard about it and tried one on. A swim cap that is all about safety and protecting heads in the water? That’s so needed. And it’s not just for six-year-old seasonal country club swimmers and other beginners who might bump their heads doing backstroke finishes at the wall. It’s of course critical to them, but it’s also for all kinds of other aquatic athletes at various ages and skill levels. Triathletes and master swimmers love the safety, comfort and durability of the cap and divers have added protection when they are learning their entries and as they graduate to the high platforms. Plus we have a large number of Special Olympics and Paralympic swimmers in this country that can obviously benefit.

Rowdy: When I think about the need for this cap I think of driving. You wouldn’t put your kid in a car without a car seat or seat belt. The Hammer Head is exactly the same. It’s a simple but essential piece of safety equipment for every swimmer. It’s going to be an absolute game changer. It’s already approved by for competition by USA Swimming and endorsed by ASCA, the American Swimming Coaches Association, which has both domestic and international membership, and swim schools are registering interest for their strokes and pre-competition level swimming classes. In five years I could see this being mandated for every age group swimmer and a great idea for all aquatic athletes.

Rowdy: Yes, in terms of protecting the head. But it’s not heavy like a helmet. It contains patented honeycomb material that helps to absorb the shock of impact when collisions occur with other swimmers or the pool walls. I was amazed by the technology and the protocol of spending over five years engineering, testing and perfecting this new product.

GMM: How big is the need for this?

Rowdy: Huge. Most swim club coaches have 15-20 kids in a lane doing warm ups and practices. Coaches, through no fault of their own, are focused on 30 plus kids in a practice and can’t see everything. Nobody can. Sometimes a swimmer who may be older, a teen for instance, may be too self-conscious to even say anything to their coach or parents after an incident so they just keep going. Accidents can happen under water and they’re impossible to know about. It makes me really nervous. I’m the father of four daughters and a grandfather to three and I think of all the young kids out there following their passion for swimming without head protection. Worse still, it’s the cumulative knocks to the head that can lead to a lasting problem. Over the course of swimming with a club for years, kids can experience a lot of bumps, elbows, kicks and head-to-head or wall collisions even with the best coaching in the world. Those incidents add up and can cause long-term issues and can be as harmful as one BIG hit.

GMM: So it’s a piece of safety equipment and not a cap?

Rowdy: The Hammer Head is both. The thing I love about it is athletes can wear it under their team caps and double cap just like Olympians do. It is wrinkle free too, so it could even cut a little time in competition with reduced drag. For me as soon as coaches start saying I want Hammer Head on my swimmers’ heads, there’s going to be a groundswell and the sport of swimming is going to take one more giant step forward. I don’t give my endorsement to something I don’t believe in one hundred percent. When it comes to Hammer Head, it’s nothing short of a game changer for every swimmer and their families – eliminating a lot of short and long-term pain that comes from injuries.

HAMMER HEAD SWIM CAP VIDEO: Rowdy Gaines, 3-time Olympic gold medalist and Richard Franklin, Hammer Head Advisory Board Chair and father to Olympic Gold Medalist, Missy Franklin, have been friends in the sport for over a decade. Hear what they have to say about the comfort and fit of Hammer Head® Swim Caps, but more importantly its role in the swimming world as a piece of SAFETY EQUIPMENT!

Rowdy Gaines is a three time Olympic gold medalist and an International Swim Hall of Famer. For three decades he has been the voice of NBC Swimming, commentating on all major domestic and international competitive swimming.

Like all great innovations, Hammer Head started with an ah-ha moment. In 2013, David Burns was coaching a swim team practice at a local country club pool with 40 kids in the pool when Madeline, his daughter, hit her head on the wall doing a backstroke finish. She started crying in pain. While David and his other coaches checked on her another, older swimmer hit her head even harder – and had to leave the pool with what turned out to be a minor concussion. Later David remarked, “what do I need to do to protect you – get you a helmet?” Madeline replied “PLEASE!” and the idea for the Hammer Head Swim Cap was born.

As if meant to be, co-founder Theresa and her husband Ken, swim club parents with experience in both product engineering and sports apparel brand marketing were sitting poolside. Everyone knew David was on to something.

Fast forward to today. David, a 20-year experienced swim coach and successful entrepreneur along with Theresa, a sports brand marketing and business development strategist are co-founders of Mako International, LLC. The company was created to design, manufacture and market Hammer Head Swim Caps in the United States and abroad. Together our mission is to reduce aquatic athlete head injuries one cap at a time.