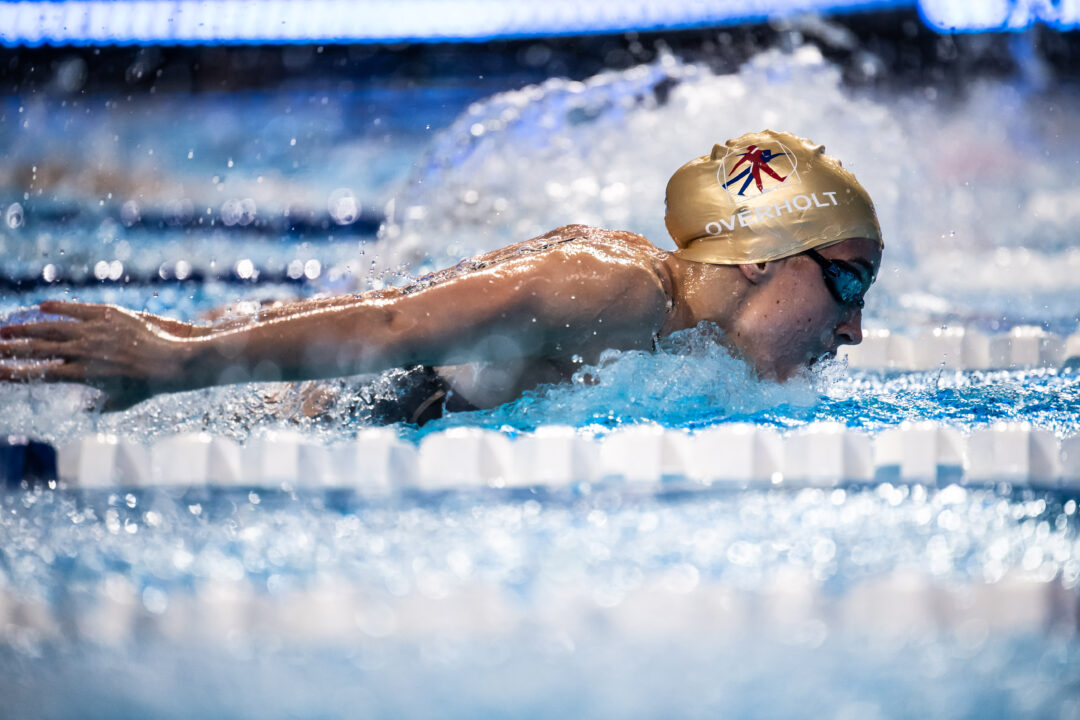 23-year old Emily Overholt, who represented Canada at the 2016 Summer Olympics, has decided to step away from competitive swimming. Archive photo via Mike Lewis/Ola Vista Photography

“After 15 unforgettable years, my swimming career has come to an end. Injuries are part of sport and after having surgery in January my body wasn’t ready to do what I wanted so badly. I am endlessly grateful for this journey and I’m looking forward to starting the next chapter!”

In Rio at the 2016 Olympic Games, Overholt swam a prelims leg of the Canadian 800 free relay. She was ultimately replaced for the medal heats, but as is customary, received a bronze medal for her effort in the preliminary rounds. She was not originally expected to be part of that relay – but was a last-minute replacement for Brittany MacLean, who was sick on the morning of the relay heats.

Overholt’s biggest individual medal came at the 2015 long course World Championships, where at just 17 years of age she won a bronze medal in the 400 IM. A year later, in Rio, she finished 5th in that race in spite of a hamstring injury.

Overholt has had to deal with a number of health issues in the 5 years since. She missed the 2016-2017 collegiate season for the University of British Columbia and the 2017 World Championship Trials after being hospitalized for 10 weeks amid a battle with depression.

Overholt swam for the New York Breakers in season 1 of the International Swimming League Season and the Toronto Titans in season 2. In season 2, she ranked 257th out of 308 swimmers who scored in the MVP standings in the regular season.

She was not entered in the draft pool for the 2021 season.

While she did swim a 4:06 in the 400 free in February of 2019, that was just before the ‘discretionary period’ began from which Swimming Canada would have been allowed to have pulled up times from prior meets to fill available slots.

She scratched the final of her best event, the 400 IM.

Overholt says in her post that she had surgery earlier this year, but didn’t disclose the nature of the injury.

Incredible, resilient career in and out of the pool. Leader of the current generation of women with her rising performances in 2015/16. Her 432 4IM bronze at 2015 worlds was really something, as was that 156 2019 4×2 split, and some dominating ‘in season’ TBird Varsity champs swims…
Congrats and best wishes for the future!

Will miss her smile and sportsmanship. Good luck in future endeavours!

Emily O had an incredible career. She exemplified the kind of athleticism and sportsmanship that all swimmers should aspire to personify. Emily helped make Canada a powerhouse internationally in the sport of swimming. She’ll be missed.

Congrats to Emily on an amazing career! You’re courage and perseverance through injuries and sickness will always be inspiring!

Overholt is one of the most successful and versatile female swimmers Canada has ever had and will be missed by so many. Wishing continued success in her next endeavor. Thank you Emily for making Canada proud for so many years.