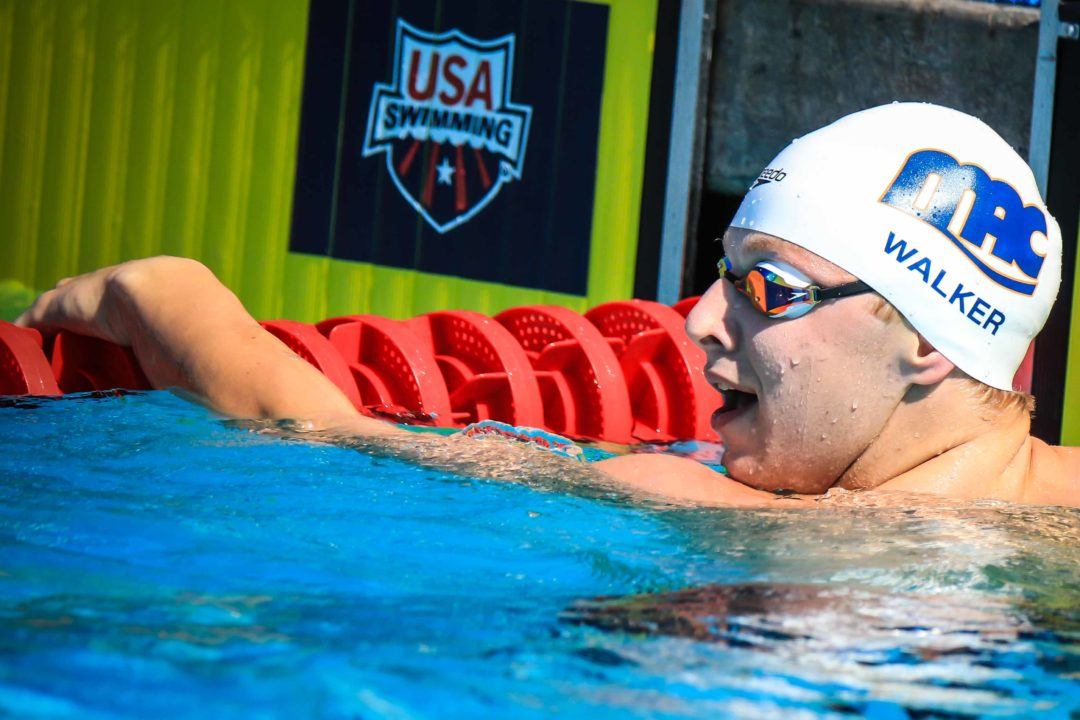 Freshman Claire Curzan took down a National Age Group Record in the girls' meet, while two Virginia commits (including Jack Walker, above) took down records belonging to swimmers who would become Olympic gold medalists. Archive photo via Jack Spitser/Spitser Photography

While Curzan was the individual star of the meet, the team title went to Leesville Road in a narrow 15-point margin of victory. That knocked off the 3-time defending champions W.A. Hough for the title for Leesville Road’s 3rd-ever state title and first since 1996.

The Lions bookended the meet with wins in the opening 200 medley relay (1:42.72) and closing 400 free relay (3:27.96). The performance that really pushed them over the edge, however, was a win from their star diver Ashton Zuburg on the 1-meter for 20 big points: more than the margin of vitory over Hough. That was an especially-important mid-meet boost, because Hough brought a typically-talented group of divers that scored 37 points in that event alone.

That was one of two individual event wins for Leesville Road at the meet. As the meet wound down to the wire, senior and Georgia commit Ashley McCauley won the girls’ 100 breaststroke in 1:01.53. That snuck under the old State Record (4A and overall) of 1:01.57 set by W.A. Hough’s Lilly Higgs at last year’s meet.

The boys from Green Hope High School won the 2019 4A State Championship in a 75-point runaway over South Mecklenburg. That makes Green Hope’s 2nd-straight 4A state title, and 4th overall. Those two teams have made the dominant force in the class this decade, combining to win now 7-straight state titles.

Green Hope took the title with depth: they didn’t win their first event until midway through the meet (200 free relay), and even then only count the two free relays as event victories.

In the 200 free relay, the team of Ben Prucha(21.76), Mitch Curlee (21.42), Michael Cotter (21.37), and John Satterfield (20.79) combined for a victory in 1:25.34. That they won the race without their top sprinter, Michael Ivy, highlights the team’s incredible sprint depth. South Mecklenburg didn’t use their top sprinter on the relay either, but without the same depth, they finished just 8th in the relay.

You buried the lead on the Leesville v. Hough team race. Hough had a DQ for an early take-off in the 400 Free Relay that sealed their fate.