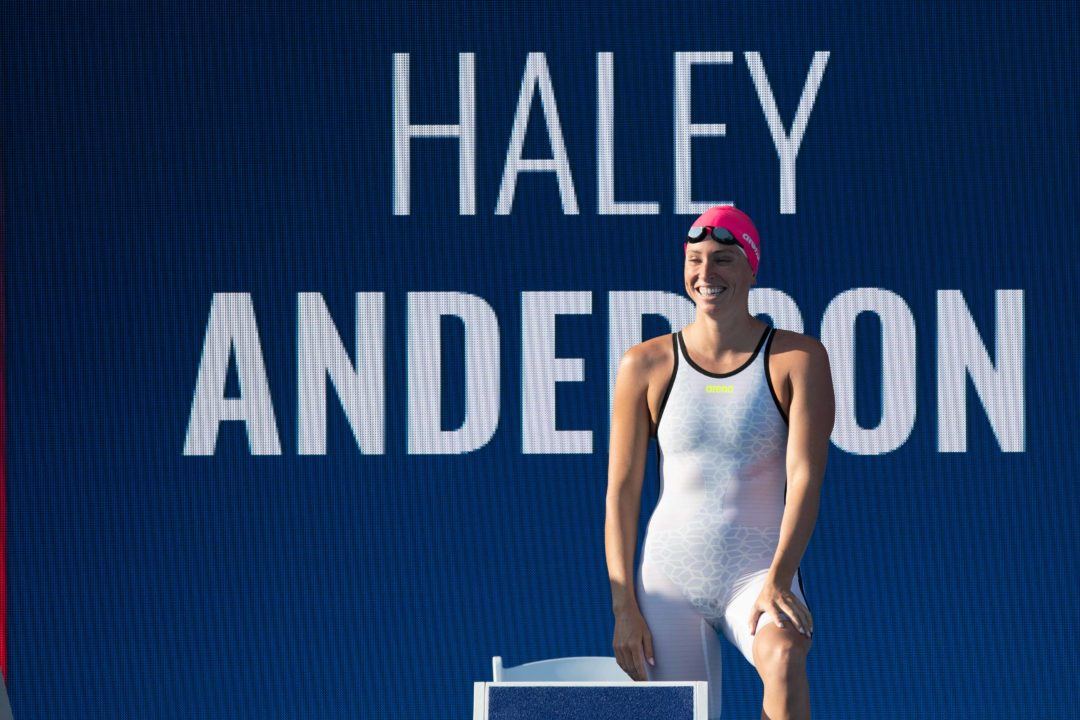 2016 Olympian Jordan Wilimovsky won the race by over 30 seconds, hitting the pad in a final time of 1:34:58.89. Wilimovsky is the only male swimmer already qualified to compete at the 2021 Olympic Games in this event, as he finished 5th overall at last year’s World Championships.

The race for second was much tighter behind Wilimovsky. World Championship team member David Heron touched in second place (1:35:05.38), about two seconds ahead of US National Teamers James Brinegar (1:35:07.01) and Brennan Gravley (1:35:06.71).

American record-holder Kieran Smith finished in 7th place, with a final time of 1:38:31.92.

Unlike the men’s race, the women’s race came down to a tight battle for first place between the country’s top two open water swimmers. In the end, Haley Anderson narrowly out-touched Ashley Twitchell for the victory 1:42:05.45 to 1:42:06.94. Both swimmers will be competing in the 10k in Tokyo via top-10 finishes at the 2019 World Championships.

US National Teamer Erica Sullivan was originally slated to compete in this event, but she did not appear on the start-list. Sullivan swims with the Sandpipers, who hosted the meet.

James Brinegar managed to take the victory over John Gallant by a judge’s ruling, finishing in a time of 54:44.26. Dylan Gravely finished close behind in third place, touching in 54:46.86.

All three swimmers finished several minutes ahead of the remainder of the field, which was led by 17-year-old Joshua Brown, who is committed to swim for Villanova in the fall.

US National Team members Brennan Gravely, Heron, and Kieran Smith were among those to scratch from this event after swimming the 10k on Saturday.

In a field of only 6 swimmers, 2018 FINA Open Water World Junior Championship 10k gold medalist Chase Travis managed to take the win over her older sister Brooke. The two finished extremely tight, touching in times of 57:37.23 and 57:39.28, respectively. 2017 Open Water World Championships competitor Cathryn Salladin followed closely behind the pair of sisters, swimming a time of 57:42.72.

Sullivan, who was also slated to compete in this event ended up scratching again, along with National Jr. Teamer Claire Tuggle. Earlier in the weekend, Tuggle competed in the Junior 2.5k, where she finished second.

The distance of the gap between first and second in the men’s 10k was a bit smaller. Trust me, I was there😊

Must have been quite the current! That’s :57 per 100m pace for Wilimovsky

Yeah first thing that entered my mind, was how accurate was the distance measuring…. Laughable that a national championship 10km race can be completed in an hour and a half!!! Strange the 5km races were on a more recognizable pace.

Yep, that was my fault miss measuring by about 150 – 200 meters each loop for the 10k. I was extremely disappointed, No excuses won’t happen again.

Host, good on you for owning the mistake but that is some mistake that would take some explaining, I don’t envy you in those discussions. 🤦‍♂️😉.