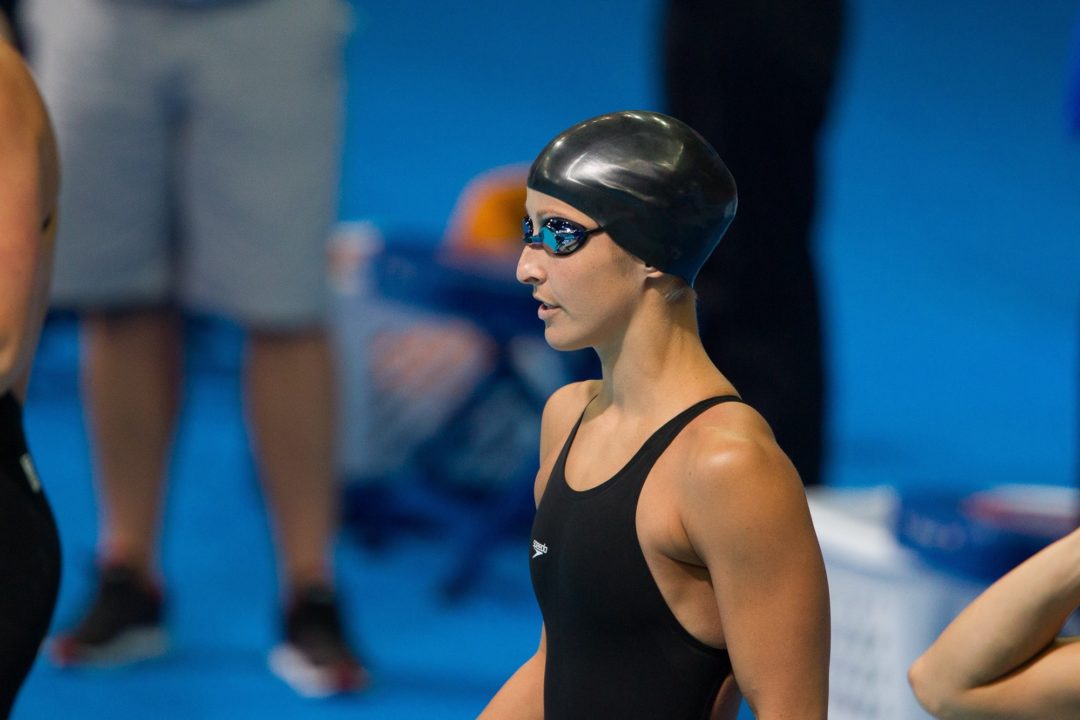 Olympic veterans step up to the blocks carrying decades of experience, while the next generation is thirsty for the taste of victory. Current photo via Tim Binning/TheSwimPictures.com

The Olympic Swimming Trials in Omaha, Nebraska are filled with emotion. The highest highs and lowest lows sweep the city hosting the greatest swim meet in the world besides the Olympic Games. Olympic veterans step up to the blocks carrying decades of experience, while the next generation is thirsty for the taste of victory. Only the top two swimmers in every individual event, and the top six swimmers for the freestyle relays, qualify for the Olympic team.

Third place at the Olympic Trials is every Olympic hopeful’s worst nightmare. It is a place I know well after touching the wall third at two consecutive Olympic Trials in the same event. In 2008, I qualified for the Olympic team in the 4 x 200 meter freestyle relay, and the very next night, I placed third and missed the team in my favorite event, the 200m butterfly.

Going from the greatest success of my swimming career to the greatest disappointment, all within a 24-hour window, was an emotional rollercoaster ride I didn’t want to be on. While my Olympic vision was swimming the butterfly at the Games, I put that disappointment behind me and focused on my freestyle leading into the Beijing Olympics.

Post Olympics, I held onto that vision of swimming the butterfly, and decided to continue training full time for the 2012 Olympic year. I was focusing on qualifying in the 200m butterfly for the London Olympics. For years, I swam around the world to gain new methods of training and explored alternative meditation and dry-land routines. Training at the University of California, Berkeley leading into Olympic Trials strengthened my confidence, as the Bears are among the best teams in the world. I couldn’t have been more prepared.

Even with all my efforts, I still came up short, placing third in the final heat of the 200m butterfly. It was deja vu. Although I gave it my all and had no regrets, the heartbreak of that moment, and the many moments following it, is difficult to express. It took me years to embrace the pain. Having your heart broken by someone else is a commonality, but breaking your own heart is hard to do. I broke my own heart in that race and know that feeling of seeing my dreams shatter on the scoreboard. It is a sadness only those who experience it can truly understand.

Every elite athlete holds a vision of the perfect race when every detail dances together in harmony; it is almost an out of body experience. The feeling is timeless, weightless and euphoric, and out of my nearly 25 years of racing, I have only felt it a handful of times. Stepping up to the starting blocks at the Olympic Trials takes a special kind of courage and confidence, along with a fine-tuned mentality.

Signing the first alternate paperwork in 2012 cemented my defeat and is a moment I will never forget. I wanted to go to the London Olympics so badly it hurt. It actually physically hurt. I sometimes woke up crying in the middle of the night hating myself for missing the team. I felt like a failure even though I had placed third in the country and nearly in the top 25 in the world. Inside the small world of Olympic training, it is easy to lose sight of the bigger picture.

Sharing these memories with other athletes who hold similar experiences has been therapeutic, as many know the shadows that stand with Olympic glory. Here in Omaha watching friends and former teammates just miss the Rio Olympic team opens up these floodgates. Defeat is a part of any sport, it is a place every athlete visits at some point in the athletic journey. American poet George Woodberry once said, “Defeat is not the worst of failures. Not to have tried is the true failure.”

All the athletes standing behind the blocks in Omaha are here to try, and because of that, no one is a failure, regardless of what place one finishes in.

Well put, the American Olympic Trials are truly a brutal experience. Everyone that follows swimming knows of your performances over the years, I hope you keep swimming!