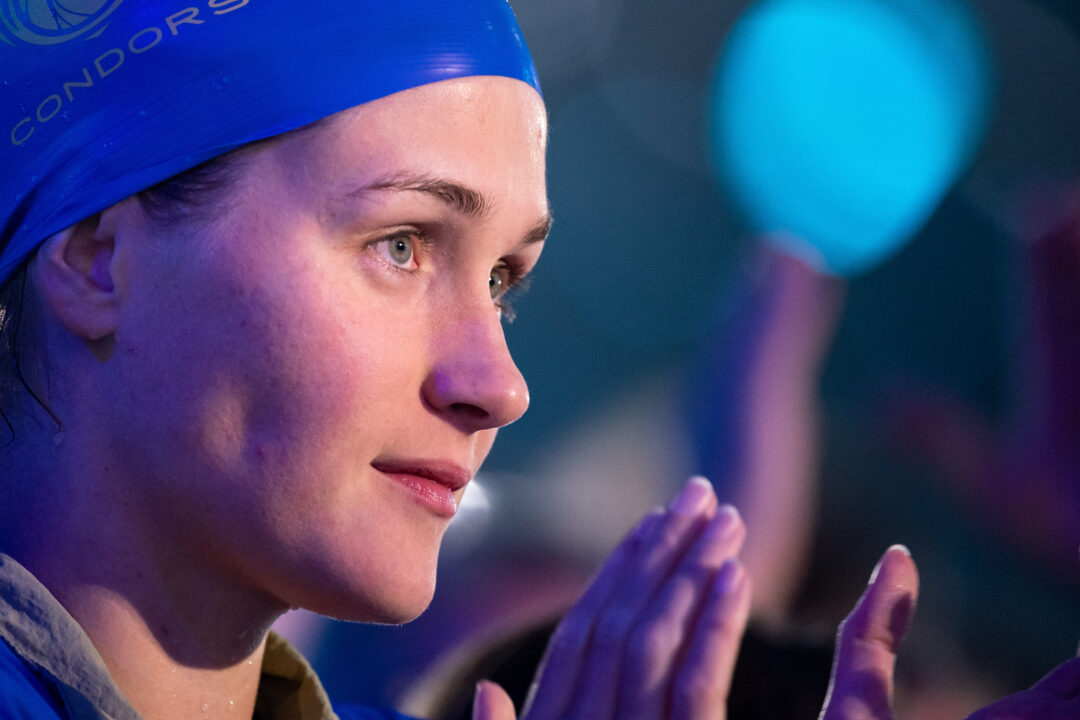 Both the Sun Devils and the school's pro group posted numerous lifetime bests at the one-day intrasquad that doubled as the program's senior day. Archive photo via Giorgio Scala / Deepbluemedia / Insidefoto

After Arizona State’s scheduled meet against Arizona and Utah was canceled due to Covid-19 concerns within the Utah program, the Sun Devils elected to hold an intrasquad meet at the Mona Plummer Aquatic Center in Tempe, Arizona. Swimmers competed in every event of the NCAA lineup except for the 1650, which was replaced with the 1000. The meet also featured members of the school’s pro group and doubled as the team’s senior night.

Claiming in the top spot in all three of his individual races was Leon Marchand, the Sun Devil freshman and Olympic Games finalist. After picking up his first win in the 200 free (1:33.26) over a field that included 2019 NCAA B-finalist Grant House and Olympic champion Ryan Held, he went on to add victories in both the 200 back and 200 IM. His time in the 200 free was also a new lifetime best and ranks 15th in the NCAA this season. In the 200 back, he cruised to a win over sprinter Jack Dolan, touching in a time of 1:44.03. He rounded out the meet with a winning time of 1:42.67 in the 200 IM.

Picking up multiple wins on the women’s side was another Sun Devil freshman, Erin Milligan. After redshirting last season along with the rest of the ASU roster, Milligan swam to a pair of sprint freestyle wins in their intrasquad. She claimed the 50 free victory by over a second, beating out Lilia Smith in a time of 23.27. She followed that swim with a 49.98 in the 100 free to beat SMith and Erica Laning. Her time in the 100 was just half a second off of her best time from the GAC Invitation earlier this year.

In the women’s 200 fly, redshirt sophomore Lindsay Looney swam to a best time of 1:54.17 to easily win over the rest of the field. A finalist in the event at the Olympic Trials last summer, that time was a new personal best and the 11th fastest time this season in the NCAA.

While Flickinger narrowly missed her lifetime best, Smoliga improved upon her best yards times in both races she swam. Competing in events she rarely swam during her collegiate career, Smoliga touched in 1:44.62 in the 200 free and 1:55.34 in the 200 back.

Other fine, mostly non-winning, swims from one team in a January exhibition after the intended conference opponent backed out the day before:

I’m assuming it was suited?

Yes, it was. I watched the meet.

Held doing 200 IM interesting. Glad to see Smoliga getting a Pb in 200 free good sign for the next few months

Love her. Curious to know if this means She’s finally adding the 200 free