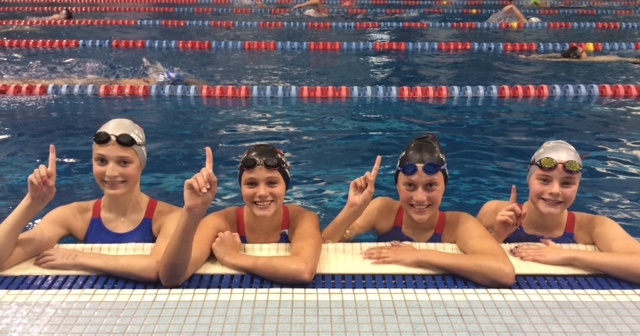 The record fell at the Ohio Long Course Junior Olympics in Oxford, Ohio. Lachey, Peroni, Routh and Huddleston went 4:27.99 in the relay to absolutely obliterate the previous NAG record of 4:34.46. That mark was set by the Westchester Aquatic Club less than a month ago.

This record has been an interesting one: the Ohio State Swim Club’s performance marks the third time in two years the record has fallen after it stood for 19 years previously.

Here’s a splits comparison between the three recent NAG record-setters:

All four girls are now 12 years old. The same foursome owns the 10&Under records in both the 200 meter free and 200 meter medley relays.

The other long course relays all belong to the Lake Oswego Swim Club from 2008, making them the oldest long course relay NAGs left on the books. The only older record is the short course 400 yard free relay for girls, which has stood since 2007.

Full results of the Ohio Junior Olympic meet are available on Meet Mobile.

6 1/2 seconds under a record that stood for 19 yrs up till 2 yrs ago– that’s incredible!!! These girls are really eating their Wheaties. Must be some great coaching there too.

I give Ulett 2 years and she’ll be one of the top swimmers in the world. She’s very versatile and improving FAST. You heard it hear first.