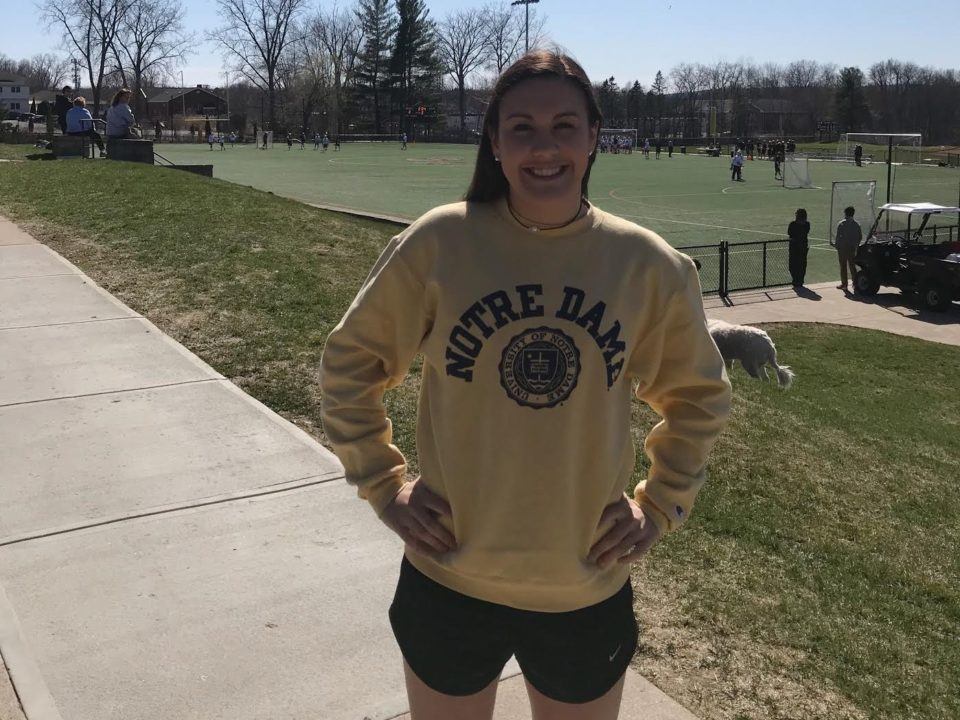 Winters, currently of the Mei's Typhoons Swimming Club, has now swum lifetime bests in both the 50 free and 100 breaststroke this weekend. Archive photo via Andrew Lowe

A 1st win and 4th lifetime best swim for 17-year old Sydney Winters of Mei’s Typhoons Swimming Club highlighted day 3 of the 2018 New England Swimming Senior Championships. The Notre Dame commit took the title in the 50 free on Saturday, winning in a new personal best of 26.69.

Her previous best time was a 26.89 in prelims, and before that was a 26.91 done at Junior Nationals last season. These swims add to a pair of lifetime bests in the 100 breaststroke that she swam earlier in the meet, which dropped her best time from a 1:14.4 to a 1:13.3.

Allegra Walker of the Executive Swim Club in New Hampshire won her first individual race of the meet as well on Saturday. In the process, she knocked 6-and-a-half seconds from her lifetime best in the 200 breaststroke, and broke the New England Swimming Open Record for 15-16s in the event. The old record of 2:38.30 was set by Jenna Barbary back in 2001. Barbary would go on to become an NCAA Division II All-American at Williams College.

15 Year old, Andrew Benson swam a 23.09 in prelims to make a nationals cut. I was at the meet and he finished ahead of Gaissert in the finals although the time showed that he went a 23.9.

What about yaboi matt lashua

Love the way you cover these meets from all over the country. I enjoy reading about the up and comers and about the exploits of the college committed swimmers.

This generation has it so good to have never swum in the old Brown Univ. pool. It was diabolical.

I did a lot of racing and water polo matched in that pool. Never had a problem. There were many worse in the East Coast back in the day.

The Brown pool has always been a good pool, even before the renovations. Those dungeons they called locker rooms definitely needed an upgrade though.