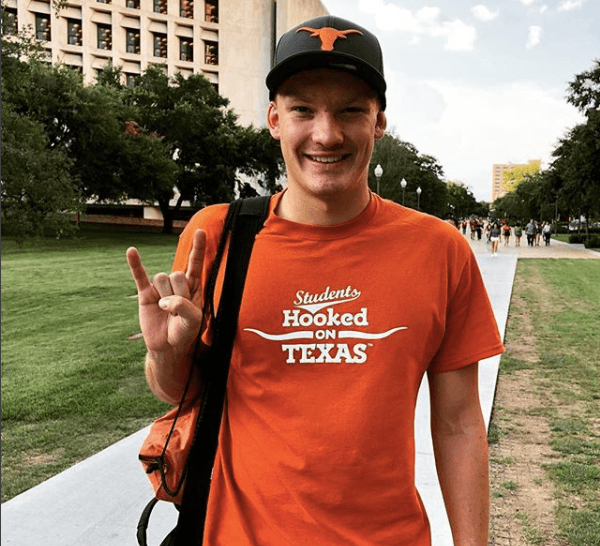 His father, Arne Borgström, won an NCAA title in the 80's at the University of Alabama. Current photo via Halvor Borgström on Instagram (@halvorborgstroem)

As it can often be with international students opting to swim in the NCAA, names and faces may show up on rosters at the start of a season seemingly out of the blue. That’s the case now with the Texas men, as their 2018-19 roster was recently posted online with a new member of their current freshman class: Halvor Arne Borgström of Norway.

Borgström is the son of Arne Borgström, who competed at the 1976 and 1984 Olympic Games for Norway. Additionally, his father Arne was a prolific distance freestyler at the University of Alabama. In 1982, he won the NCAA title in the mile swimming for the Crimson Tide.

Halvor Borgström is listed as a butterflier on the Texas roster, though he’s solid in the IM’s, mid-distance freestyle, and breaststroke events as well. In fact, the 200 IM may be his strongest race in LCM.

Borgström is part of a now thirteen-strong class of freshman with the Longhorns. This is a monstrous class, both in size and in talent — it’s no wonder they garnered SwimSwam’s #1 spot in the class of 2022 rankings.

Of all the names to hear behind the blocks, Halvor Bjorgstrom has to be one of the most intimidating. It sounds like you’re stepping up to race a Norse God who could kill you where you stand

15
0
Reply
JP input is too short
Reply to  Paul

My sophomore year, there was a guy Drury University brought in midseason. His name was Sergiy Bilov. He was about 6’4″ 220# and swam with a mullet and no goggles.

Now THAT was intimidating.

I spent at least 30 seconds interpreting ‘Son of Olympian’ in the article title as a joke that he was the son of a Greek god of Olympus, and then wondering why they would say that when he has a Norse sounding name.

See, I think everyone who thinks the name is intimidating is thinking “Mighty Ducks 2 vs. Iceland.” If you think about it in the Swedish pitch accent, it’s probably way less intimidating sounding.

Excited to see you swim Halvor! 🤘🏻

I’m sure he’ll get faster, but right now he barely makes the team with those times. The pedigree is there for sure.

And this class was already insane to begin with

Two things for sure.
He’ll be faster than he ever thought he’d be
He will know the difference between corn tortillas and lefse

Girls are faster than him in everything but the 2IM. Ladies have really stepped up there game the last decade.

I mean those are lcm times

Flick would dog him in the 200m fly

If by girls you mean “Katie Ledecky and Katinka Hosszu”, yes, but that hardly excludes you from being a very good male swimmer.