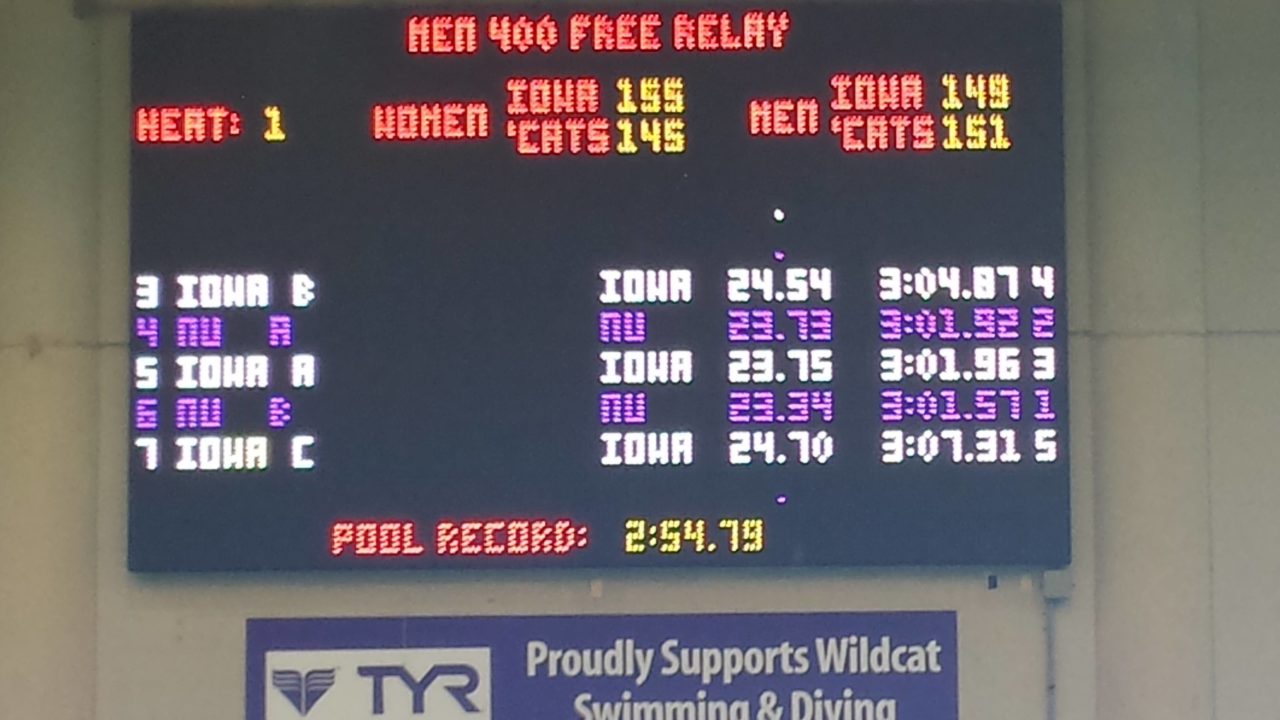 In a meet that was decided by fractions of a second, the Northwestern men triumphed against the visiting Iowa Hawkeyes...

In a meet that was decided by fractions of a second, the Northwestern men triumphed against the visiting Iowa Hawkeyes in an intense matchup at the Norris Aquatic Center on Saturday afternoon 151-149. The Iowa women got even by edging the Northwestern women’s team 155-145.

In the first race of the afternoon, Iowa’s seniors led the way as Lindsay Seemann, Karolina Wartalowicz, Abbey Tuchscherer, and Elise Borja combined to win in a 1:45.50 (splits unavailable). The B relay from Iowa snagged second with a 1:45.96, while Northwestern’s B relay took third in 1:47.40. Northwestern’s A completed the relay in a 1:44.25, but was disqualified on an early exchange.

Northwestern’s Lacey Smith broke the Iowa stranglehold by taking the 200 freestyle in a 1:51.46, which was good enough to top Iowa’s Emily Hovren (1:51.99) and Olivia Kabacinski (1:52.31). In the men’s race, Northwestern’s Charlie Cole used a strong second half to overcome his competitors from Iowa, as the freshman took the race in a 1:40.13. Northwestern’s Stephens also relied on his back half, and he came away with second in a 1:40.44 while Iowa’s David Ernstsson rounded out the top 3 in a 1:41.62.

Lacey Locke of Northwestern followed up on her teammate’s win by cruising to victory in the 100 backstroke in a very strong 55.02. Iowa’s Seemann took 2nd in 57.56 and Northwestern’s Melissa Postoll rounded  out the top 3 with a 57.80. Dustin Rhoads came off his strong butterfly split in the medley relay to take the top spot in the men’s race with a 48.25 while the Northwestern pair of Mark Ferguson (49.70) and Dominik Cubelic (49.91) snuck in for 2nd and 3rd behind the Iowa senior.

Northwestern’s Becca Soderholm and Ellen Stello continued the Northwestern hot streak with a 1-2 finish in the 200 butterfly with 2:04.39 and 2:04.42 finishes respectively. Iowa’s Haley Gordon took third in a 2:04.66. In a men’s race, a thrilling race from start to finish saw Iowa return the favor with a 1-2 finish of their own as Iowa’s Chris Freeman (1:52.41) and Tyler Lentz (1:52.53) both outtouched Northwestern’s Grant Halsall (1:52.54). Notably, Halsall had the fastest last 50 of the three swimmers, so the finishing edge of the Iowa butterfliers can be appreciated even more while keeping that in mind.

Following the first break of the swim meet, Olivia Kabacinski started the Hawkeye’s strong finish by taking the 100 free in a 51.70. This just edged NU’s Wisnes (51.85) and Iowa’s Hovren (52.31) rounded out the top 3. Chase Stephens displayed his sprint dominance by doubling up in the 100 free with a winning time of 45.48. Stephens split the race in a very controlled manner with a one second difference between his first and second 50’s (22.2, 23.2). Iowa’s Ernstsson was second in a 46.11 and Gianni Sesto took third for the Hawkeyes in a 46.23.

Iowa’s Gordon scored a key victory for the Hawkeyes with her 56.28 winning effort in the 100 buterfly, and her teammate Abbey Tuscherer was about a half second back at 56.80 to score big points for the yellow and black. Finishing in third was Northwestern’s Soderholm in a 57.18. Mark Ferguson triumphed for the Wildcats in the men’s version of the race with a dominant 49.07 effort, and this was good enough to hold off Iowa’s Allen and Rhoads who finished 2nd and 3rd in 49.72 and 50.33 respectively.

In diving action, Abigail Grilli took the 1 and 3 meter events for the Hawkeyes while Northwestern’s Andrew Cramer also doubled up on both diving events. NU’s Mary Kate Campbell grabbed 2nd on 3 meter for girls while her teammate Cosima Lenz rounded out the top 3 on that discipline. On 1 meter, Lenz took 2nd while NU’s Caroline Grant took 3rd overall. In the men’s 3 meter, Nick Pinkerton grabbed 2nd for the Wildcats while Iowa’s Addison Boschult took third. On 1 meter, Boschult bested Pinkerton as they took 2nd and 3rd respectively.