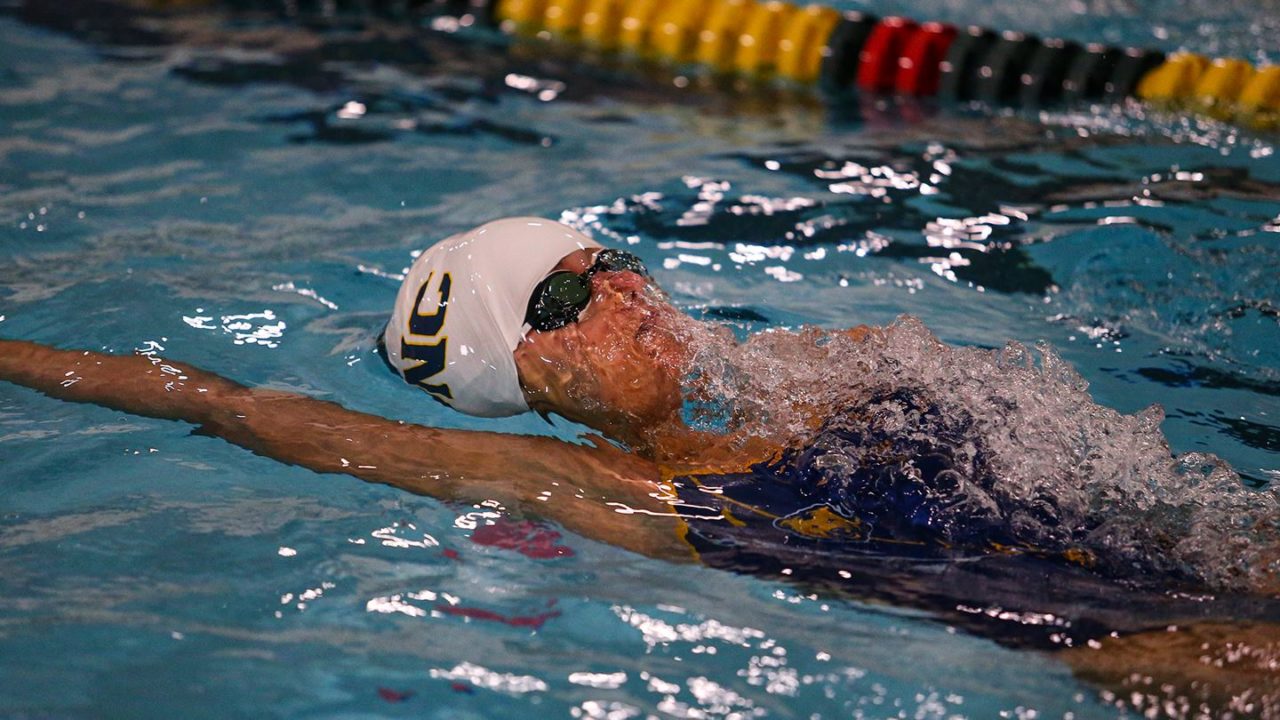 COLORADO SPRINGS, Colo. – A perfect start to 2021. At least for the Northern Colorado Swim and Dive program.

In a quad dual featuring the Air Force Academy, the Colorado School of Mines and Colorado Mesa, UNC swept all three matchups Friday evening in a performance that featured seven wins for head coach Lisa Ebeling and the Bears.

Northern Colorado kickstarted the evening with its season-best swim in the 200-yard medley relay (1:43.25), setting a tone for the rest of the evening.

Freshmen Saana Liikonen and Katelyn Bergin continue to pile up impressive performances in their first year in the Blue and Gold.

Liikonen swam her best 50 free of the season (23.64) which not only won the event but makes the Finland native the six-best performer in program history in the event.

Meanwhile, Bergin played an integral role in both winning relays and turned in a 100 fly time of 56.14, good enough to make her the seventh-best performer in UNC history.

Although Paula Nunez Blazquez didn’t win the heat in the 200 IM, the sophomore delivered a personal-best 2:05.71, edging out her time from a season ago by two-tenths of a second.

Junior Madelyn Moore also started the New Year off with a bang. Taking home the 100 free with a time of 50.14 (8 tenths of a second off her personal best and school record), her night was also sandwiched by both winning relays.

Speaking of relays. Needing a solid effort to cap off what had already been an impressive evening, Madelyn Moore, Ali Jackson, Katelyn Bergin and Saana Liikonen outswam everyone to take home the final event of the night and secure the victory over all three schools in the quad dual format.

Northern Colorado’s divers finally got their first taste of competition this season. Tori Sayers led the charge in the 1-meter portion, scoring 207.50. Freshman Erica Farris made her debut, scoring 183.55in the 1-meter and 171.55 in the 3-meter.

DECK TALK
Lisa Ebeling, Head Coach
“I’m proud of our girls for stepping up and taking advantage of the opportunity to race today. We talked about swimming tough, and they did a great job of getting their hands on the wall first. We need to focus on cleaning up some technical details going into tomorrow.”

WHAT’S AHEAD
Get the alarm clock ready for tomorrow morning when the Bears get set for another quad dual with Air Force, The Colorado School of Mines and Colorado Mesa at 9 a.m.

Overall on the meet, AF claimed victory in a pair of events, while finishing in the top three in all but one. This included seven runner-up finishes.

The two event wins came from sophomore Sefilina Maile in the 200 free, as well as senior team captain Kylie Stronko in the 100 back. Maile finished over four seconds ahead of second place in the 200 free.

Maile also had a highlight in her second place finish in the 100 free, as her time of 50.27 improved on her fourth fastest time in program history. It was previously 50.49.

The Falcons will be right back in action tomorrow, Jan. 9, for another quad-meet against the same teams. Action inside the Cadet Natatorium will begin at 9 a.m. MT.

The Mavericks also combined to set eight RMAC-leading performances in a quadrangular at the United States Air Force Academy on Friday afternoon at the Falcons’ Cadet Auditorium.  They did come up short to the host Falcons, 142-100, and another NCAA Division I opponent in Northern Colorado, which edged the now 2-3 (2-0 RMAC) Mavericks, 127-114 in the other team scoring battle.

Borgenheimer, a transfer from Minnesota State, who set the Maverick record in the 200-yard breaststroke in her Maverick debut on Halloween (Oct. 31), won both the 200 individual medley and 100 breast in Friday’s dual, both with NCAA Championship “B” cut, RMAC-leading and school-record setting times.

Her 200 IM mark of 2:05.00, which converts to 2:03.40 with the altitude-adjustment, took down what was the second-oldest Maverick school record.  The former record of 2:03.43 was set nearly seven years ago by Briana Purkapile at the 2014 RMAC Championships.

Her new times will rank her as high as fourth (100 breast) and seventh nationally and lead the RMAC by wide margins.  Borgenheimer stands second in Division II with her earlier 200 breast time of 2:15.57.

Meanwhile, Harris set an NCAA qualifying score of 270.95 points to win the 1-meter diving event by more than 40 points over teammate Ali Lange and the rest of the 9-woman field after taking victory in the earlier 3-meter competition with a score of 262.80 points.  Lange finished third in that event with 236.90 points.

Borgenheimer’s swims, which  were just two of many other highlights for the Maverick swimmers, who set additional RMAC-leading times in both relays as well as in the 200 free, 100 fly, 100 free and 100 individual events throughout the course of the afternoon.

In the 200 medley relay, Grace Payton, Borgenheimer, Noel Scott and Logan Anderson combined for a time of 1:45.49 to finish third and extend CMU’s RMAC lead.  The “B” quad of Sarah Fillerup, Kennedy Bright, Anna Barjenbruch and Natalie Saul were sixth in 1:48.50, finishing ahead of both of Mines’ units.

The Mavs also took third in the 400 free relay as Maddie Pressler, Scott, Saul and Anderson combined for a time of 3:33.94 (3:33.34-altitude adjusted) to extend their RMAC lead.

Pressler also took over the RMAC lead from teammate Katerina Matoskova in 200 free as she finished third in 1:56.67 (1:55.07-altitude adjusted).  Freshman Elsa Huebsch was just behind in 1:56.86 (1:55.26-altitude adjusted) to finish fourth as the Mavericks now have five of the RMAC’s six fastest swimmers in that event thus far in 2020-21.

Later, Pressler also took third in the 100 free with a time of 53.26 (53.11-adjusted) to take over the RMAC performance list lead from teammate Lauren White.  Anna Barjenbruch also fared well posting a mark of 53.56 (53.41-adjusted) to finish fourth as the Mavericks now have each of the seventh fastest swimmers in the RMAC this season.

Meanwhile, the Mavericks were quite strong in the 100 back as Huebsch posted a time of 56.89 (56.74-adjusted) to take the RMAC lead and move into the No. 7 position in Maverick program history.  She finished second.  Fillerup (58.05) and Payton (58.25) finished fourth and fifth, respectively.

In the distance events, Isabelle Hansson finished fourth in the 1,000 free moving into second place on the RMAC performance list behind teammate Robyn Naze with a time of 10:58.99 (10:43.49-adjusted).  Delaney Kidd finished seventh in that event at 11:22.81.

Saul also recorded CMU’s top 50 free time of the season, finishing seventh in that discipline in 24.70 seconds, third fastest in the RMAC this campaign.

The Mavericks will compete against the same foes in another quad meet in the Cadet Natatorium on Saturday morning at 9 a.m.

COLORADO SPRINGS – Colorado School of Mines officially opened the 2020-21 swimming season with the first of two days at Air Force on Friday.

The Orediggers took on Division I foes Air Force and Northern Colorado as well as RMAC rival Colorado Mesa across 13 events on Friday. The women’s meet was set up as a four-way dual with scores of Colorado Mesa 173, Mines 63; Air Force 181, Mines 55; and Northern Colorado 173.5, Mines 52.5. The men’s meet was scored as an invitational with Air Force first with 361, Mesa second with 218, and Mines just a point behind with 217.

Among the top individual performances in the evening’s first session for the women, the Oredigger freshmen excelled as Jorie Selig led the way with a second-place 24.25 50-free time that was tops among D-II swimmers. Sarah Bennett also impressed in the 50-free placing fourth in 24.47, while Anne Osmun snagged a third-place finish in the 200-IM at 2:09.40 and Lauren Mayo led the Orediggers in the 200-free with a fifth-place 1:57.54.

The Mines men picked up three event victories and numerous other top performances to be competitive in their season debut. Harry Smith scored a win in the 50-free, surging to a 20.88 win over the field, and Robert Clayton added a victory in the 100-fly in 49.66.

The Oredigger relays had a great night as the 400-free squad of Smith, Birnbaum, Clayton, and Wood won in 3:02.72, while their top 200-medley relay of Birnbaum, Scherschel, Clayton, and Smith took second in 1:30.81.

The second day of the meet begins at 9 a.m. Saturday with a 12-event women’s quad, followed by the men’s session at noon.