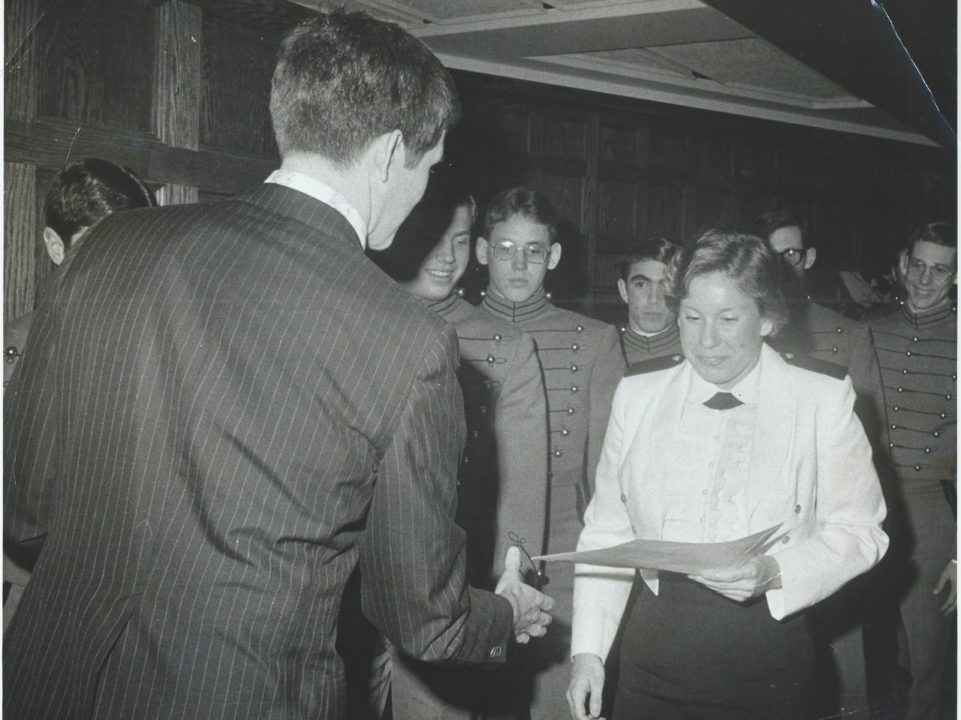 Bobbi Fiedler-Prinslow finds nothing remarkable about being the first female swimmer at the United States Military Academy.

“What’s the big deal?” she says. “You’re making more of it than you should.”

She was among the first group of women to enter the Academy, which is better known as Army, or by its location – West Point, some 40 miles north of New York City. The upperclassmen who greeted her and the other 118 females that July day in 1976 were almost to a man united in purpose. Chicks among the corps of cadets? Not going to happen, at least not on their watch, and they had the means to impose their will. New cadets faced a demanding year enforced by the upper classes.

The concept was to convert civilians into soldiers as quickly and efficiently as possible. The conversion back then consisted of a modicum of practical military training and a heavy dose of spit shine and intimidation, much of which would be dubbed abuse by today’s standards. Attrition over the first two months, a period called Beast Barracks, was typically 20 percent. Some left West Point within hours of arriving. The law adding women to the mix for the first time in West Point’s history, which dated back to 1802, was little more than a year old when Fiedler-Prinslow arrived, not nearly enough time to change the mindset of the testosterone filled institution regardless of how hard the Academy’s commanders tried.

“There was no one who was for the women coming,” says Ray Bosse, a captain of Army’s swimming team during Fiedler-Prinslow’s first year. “And those who look back now and say they were are lying.”

One Woman Among 40 Guys

Fiedler-Prinslow (front row, second from left) among the Army men’s JV team in 1977.

What’s more, there was no women’s swim team. That wouldn’t happen for another year. Fiedler-Prinslow would have to train and compete with the men. She would be one female among 40 guys.

So, no big deal? Come on! The intervening years have undoubtedly softened her memories of gratuitous harassment, isolation, and a crushing sense of buyer’s remorse.

Really, she insists, no big deal.

When her dad showed her a letter asking her to apply to West Point, she gave him an incredulous look. She was a freshman at Michigan State majoring in math, swimming and playing field hockey, and excelling in Army ROTC. Life was good. Why change, especially to go to a place she knew nothing about?

“I had no earthly idea of what I might be getting into,” she recalls. Right up until the moment when she first came face-to-face with an upperclassman she remained clueless about the implications of being one of the first women to test the tolerance of a 174-year-old strictly male enclave.

Her dad, a career officer and a Naval Academy graduate, though Fiedler-Prinslow can’t recall him ever talking about his experiences at Annapolis, brushed aside her dismissal. He persisted to the point that she agreed to sign the application if he compiled it. A series of mini-decisions followed. Yes, she would take the physical. Yes, she would take the fitness test. Yes, she would consider accepting an appointment. And finally, yes, she would give West Point a try, but only for the first summer. The commander of the ROTC unit at Michigan State agreed to hold her scholarship until the end of August just in case she decided to return.

“I Would Show Them.”

Fiedler-Prinslow doesn’t recall any overt examples of abuse during Beast Barracks above what her male classmates endured. Still, the upperclassmen weren’t happy. They conveyed their disapproval by tone and countenance. They wanted the female intruders gone. This was West Point, after all, a bastion of manhood. Yet the snubs and the denigrating comments had the reverse effect. When she called her dad one Sunday afternoon near the end of Beast Barracks, he asked if she was going to stay. Her former ROTC commander needed to know one way or the other.

She wanted out. She was sure about that. But if she left, the upperclassmen who had conveyed such disdain would win. That was unthinkable.

“I wasn’t about to be told I couldn’t do something,” she says. “I would show them. It’s funny. If they had shown me that they wanted me there, I probably wouldn’t have stayed.”

In comparison, her introduction to the swim team was cordial if not friendly. She first meet Head Coach Jack Ryan during a mass athletics session over the summer. He was supportive from the start. The swimmers, however, were leery. The handful of other women who thought about swimming in a men’s only program didn’t last long. Fiedler-Prinslow stayed, working out in the junior varsity backstroke lane. She showed up every day, worked hard and kept up. Acceptance followed, though slowly.

“She had the right personality, the right approach to fit in,” says Bosse, who coached at West Point for 18 years, 13 of them as head coach, after he finished five years of active duty in the Army. “She didn’t ask for anything special. She just liked hanging out with swimmers.”

Coach Ryan had her swim exhibition in a few of the men’s JV meets. (In one of those meets she swam beside West Point sophomore Chris Prinslow, who would improve dramatically and graduate with three school records and an NCAA championship appearance. The two married in 1988.) In March 1977, at the New York Metropolitan AAU Senior Championships (what today would be the LSC championships), she competed with her JV teammates and scored points with career best times in the women’s 100- and 200-yard backstrokes, in the process helping Army place second overall. It never got to the point she felt she was one of the guys but, as she says, “Swim practice became my safe place.”

She doesn’t have much to say about her remaining three years at West Point. Keep in mind that from her perspective, being one of the 62 women who first graduated from the Academy (attrition rate: 48 percent) and the first swimmer in a program that has had a 41-year successful run, for the most part, is not a big deal. She’s not shy or reticent. In fact, quite the opposite. It’s just that everyone faces challenges. Why are hers special?

When pressed, she will say that swimming had a lot to do with her graduating. She was the one woman in her class on a men’s team, getting up early most mornings for practice, competing against men in meets. In a place that reveres physical prowess, she was granted entry to an inside circle, her gender notwithstanding.

“I was treated pretty good,” she says. “So much of it was because I could meet the physical challenges. So many couldn’t. They were the ones who drew the negative attention.”

No Regrets. Not One.

Fiedler-Prinslow and her husband, Chris.

After her freshman year, the athletic department hired a women’s coach with the intent of a full-fledged varsity program. Recruiting came into play. The competitive level of the female swimmers improved considerably. Though Fiedler-Prinslow was captain her junior and senior years, she was more and more a bit player in a growing concern. Yet no regrets. Not one.

“We went from nothing to having (Division II) national qualifiers,” she says.  (The women’s program moved to Division I in 1990.) “We had a respectable team, not just a varsity sport in name only. I’m glad I did it. I am…” She pauses. Even a hint of self-promotion takes effort. “…I am immensely proud of what I accomplished along with my (female) classmates.”

After graduation in 1980, Fiedler-Prinslow served as an Army officer for 17 years before taking a job in private industry. She and Chris live in Missouri. They have a son who graduated from the Air Force Academy in 2018.

I love this story and the photo! Ms. Fiedler-Prinslow comes across at tough as nail, humble person. Even as male I can relate to this story a bit since I attended all male merchant marine school with military like discipline back in Poland 1978-82. 1st year was especially tough but these years were some of the best in my life especially time spent as a cadet aboard Dar Pomorza, famous polish tall ship. We did have a mandatory early morning one hour a week swimming class and all I remember was dreading getting into a very cold water 🙁

Great story. Hats off to any military academy grad. They are perhaps some of our best and brightest on a regular basis. For Bobbi to jump onboard with a year of college already under her belt is especially telling. CONGRATS “young lady” on being up for the challenge and on a job well done!

Cool story. As Bobbi’s contemporary and knowing a few women who matriculated at military academies, I think her attitude about it being “no big deal” was consistent with most of these women. We came into consciousness as the civil rights era was in full blossom, and women’s equality was a presumption, even if it was (and still is) aspirational in our society. As an Air Force brat with a West Point educated father (no AFA until late 1950s), I chuckled at the fact that her Dad went to Annapolis, she and her husband went to West Point and her son went to the AFA. Next generation: Merchant Marine? Or maybe there will be a Space Academy.

Or will Space stay part of AFA like Marines at Annapolis?