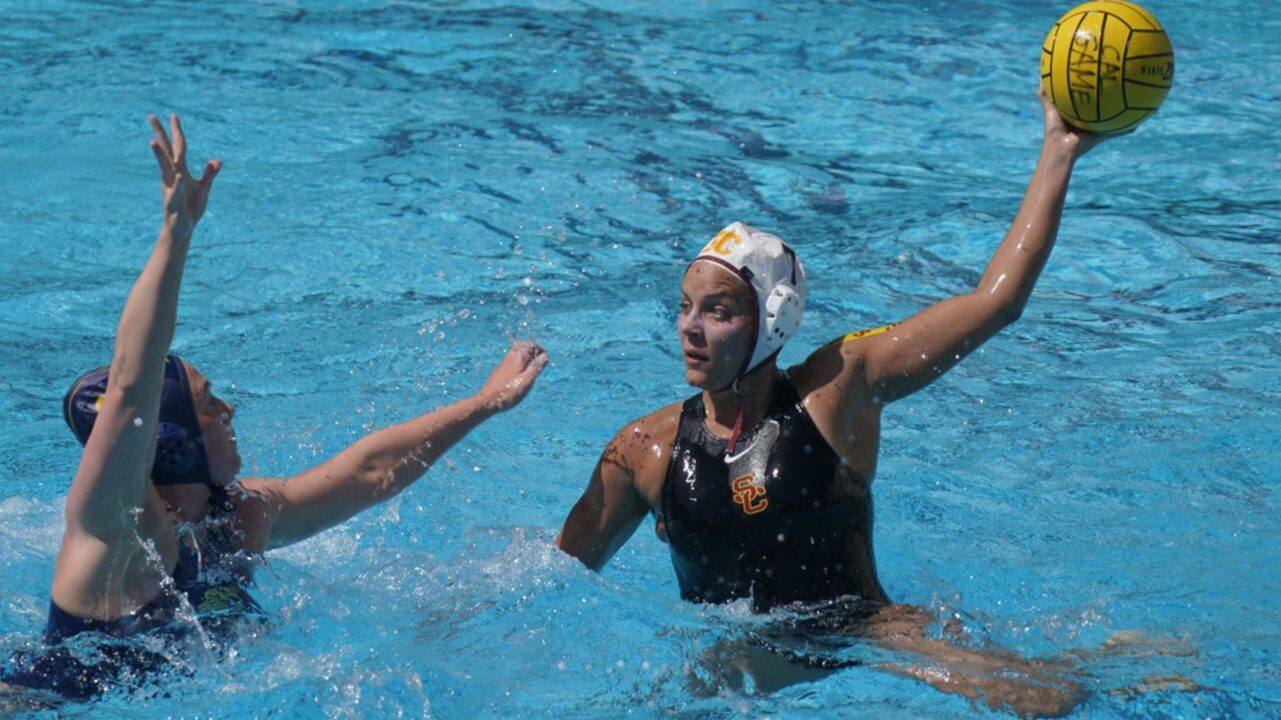 No. 1 USC splashes back down in home waters for a two-week stretch of MPSF action at Uytengsu Aquatics Center. The undefeated Trojans (12-0, 6-0 MPSF) play host to No. 2 Stanford (6-2, 4-2) this weekend in big back-to-back conference clashes. Both games will take place at 1 p.m. on Saturday (April 10) and on Sunday (April 11). Due to ongoing LA County restrictions, fans are unable to attend collegiate athletic events.

USC started this 2021 campaign in the same spot it wrapped up the shortened 2020 season — at No. 1 in the nation. The Trojans have remained in that top spot since those Feb. 7 preseason rankings, staying at No. 1 in this latest set of national rankings (released March 31).

SCOUTING STANFORD
The No. 2 Cardinal is 6-2 overall and 4-2 in MPSF play after beating UCLA 12-11 and then falling to the Bruins 11-10 last week. Sarah Klass leads Stanford in scoring with 25 goals. Goalie Emalia Eichelberger is averaging 10.3 saves and 8.1 goals-against per game in her eight appearances. In a series dating back to 1996, USC is 38-37 all-time against Stanford after the Trojans beat the Cardinal 10-5 when they last met in the 2020 Barbara Kalbus Invitational championship game last season.

BY THE NUMBERS
Now 12 games deep into 2021 action, Denise Mammolito leads the Trojans in scoring with 28 goals,  followed closely by Verica Bakoc with 26. Also in the 20-goal realm to date are Maud Megens and Grace Tehaney with 22 goals each. In all, 14 different Trojans have scored so far this year. On the defensive end, senior goalie Holly Parker — thanks in part to a career-high 12 saves collected recently — is averaging 8.7 saves and 6.8 goals-against per game in her eight appearances in the cage this season, while sophomore Carolyne Stern has appeared in five games, averaging 7.1 saves and 7.3 goals-against per game, and Erin Tharp has checked in twice, making seven saves and allowing just four goals in 16 minutes of work. As a team, USC is averaging 13.3 goals per game offensively, while the defense has allowed 7.0 goals-against per game. The Trojans have held opponents scoreless in seven complete periods so far.

CLIMB ON
USC seniors Maud Megens, Denise Mammolito, Kelsey McIntosh and Holly Parker have all been working their ways up the USC career charts. Having cracked the all-time top-10 this season, Megens stands at No. 9 among USC’s scoring leaders with 185 goals scored so far. Mammolito, meanwhile, is currently at No. 13 all-time with  151 goals, and McIntosh is on the board at No. 29 with 112. Goalie Parker also has climbed the career ladder, now ranked as USC’s No. 8 all-time goalie with 220 career saves.

LAST ACTION
USC scored two hard-fought road wins last in its first-ever trip to Bloomington, Ind., to take on No. 15 Indiana. In their first test on Friday, USC unleashed a four-goal rally to turn a tied game into one that the Trojans could control on the way to a 10-8 victory over the Hoosiers. Denise Mammolito scored four goals for the Trojans, and goalie Holly Parker hauled in a career-high 12 saves to help hold off the Hoosiers. The following day, USC turned the tide on a tight first half that saw seven ties and ended up swamping Indiana 19-10 with an overwhelming second-half surge. The Trojans piled up 10 goals and gave up just two in the final 16 minutes of action to buckle in another win, which featured a career-high-tying five goals from Denise Mammolito.

BAKOC’S BREAKOUT BRINGS FIRST MPSF HONOR
Days after drilling a career-high seven goals in a single game, USC senior Verica Bakoc landed her first career selection as MPSF Player of the Week on March 22. In back-to-back MPSF wins at California over the weekend, Bakoc helped her top-ranked Trojans stay undefeated on the year with her offensive output. In the first matchup with the Golden Bears, Bakoc delivered two goals on three shots and added a steal as USC beat Cal 17-11. The next day, in a tighter affair with the Bears, Bakoc was the spark USC needed. The left-handed senior sizzled in seven goals on nine shots, more than doubling her previous career high of three goals and scoring the third-most goals in a single game by a Trojan with her seven-goal onslaught in USC’s 12-9 victory over Cal. With 19 goals already this season, Bakoc has eclipsed her previous season best of 14 goals. She is the second Trojans to earn MPSF Player of the Week honors this season, following senior Maud Megens’ selection on Feb. 16.

PINTA’S PROGRAM
An All-American and national champion as a player at USC, Marko Pintaric is in his second season as head coach of the USC men’s and women’s water polo teams. A long-time assistant coach, associate head coach and co-head coach for the Trojans, Pintaric officially was named USC’s new leader in August 2019. When the 2020 women’s season was cut short due to the coronavirus pandemic, Pintaric had the USC women ranked No. 1 in the nation. This year, Pintaric aims to help propel the Women of Troy to a seventh national championship.