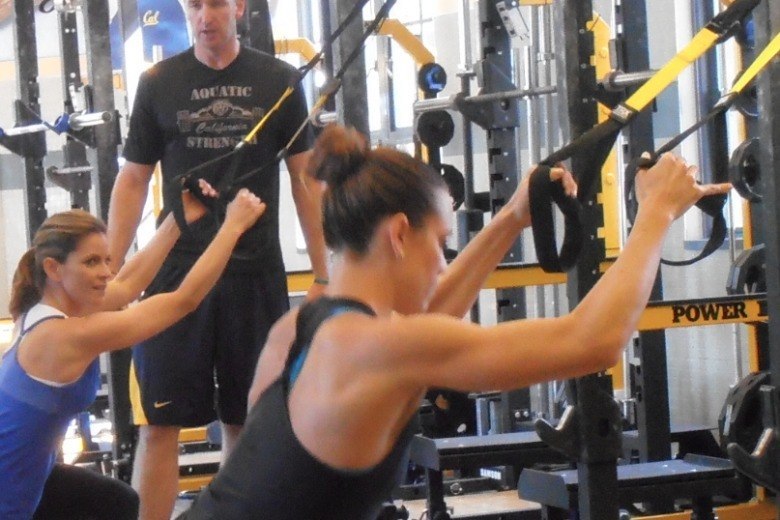 The two-time silver medalist in the event was just over the required 51.96 that it would have taken to automatically qualify for the Games.

Nina Stanisavljevic and Martina Bukvic both amassed three event wins this weekend at the Serbian Grand Prix in Belgrade.

Nick Folker has resigned from his role as the strength & conditioning coach for the Cal Golden Bears to focus on his independent training ventures. Those ventures include his F.A.S.S.T. personal training program and a new project, BridgeAthletic – an innovative mobile training platform.

In other words – Folker has developed a reputation as basically synonymous with dryland training for aquatics athletes through his work with the Cal men’s and women’s swimming, diving, and water polo teams. The South African native has been with Cal for 9 years, including through all 5 swimming & diving NCAA titles, a 2011 NCAA runner-up finish in women’s water polo, and 2006 and 2007 NCAA Championships in men’s water polo.

See the videos below Nick did with SwimSwam contributor Chris Morgan in April of 2012:

When we caught up with Folker over the weekend to discuss the move, he was immediately caught up in the near-nostalgia about the Cal program; with its resume of success during his time there, that is an understandable sentiment.

“Leaving Cal has been one of the toughest decisions in my life,” Folker said. “Moving on from the world class aquatics system I have helped build over the last 9 years is by no means a light-hearted decision. The relationships and memories created with the coaches and athletes I had the absolute pleasure to work with will always be important to me.”

Though what Folker does is, on a shallow level, a very physical endeavor, part of what made his time at Cal so successful is his ability to build relationships with the Cal coaching staffs and to understand the mental process that the development of a high-level athlete must necessarily include.

“It takes a very special student-athlete to excel at Cal, in all facets of the collegiate experience,” Folker said. “I have cherished being a part of the development and success of hundreds of athletes throughout their collegiate career. Working with Dave Durden to prolong the careers of the post-collegiate “pro” group at Cal (Natalie Coughlin, Nathan Adrian, Anthony Ervin, Tom Shields, Damir Dugonjic, Martin Liivamagi), and allowing them to to compete at the highest level is very, very special to me.”

For Folker, though, it was time to reach to a broader audience.

“I feel that a large number of swimmers, myself included, would have had more successful, prolonged careers by implementing a thoughtful strength program,” Folker said. “Over the last 9 years at Cal, we were able to offer our athletes exactly that, and now, with BridgeAthletic I am working to empower a much larger group of athletes by giving them access to world class, sport specific training programs.”

And so BridgeAthletic is born. It is centered around a cloud-based phone app and a website, that provides customized training routines, data tracking, and leaderboards and rankings that allow athletes to compare themselves to teammates – a key to the system. The system either allows Folker’s BridgeAthletic staff to produce workouts, or for athletes’ coaches to input them – which could be a huge tool for club and high school coaches, for example, when swimmers go on vacation.

“Mobile computing has created a tool that these athletes can use to access information like never before,” Folker explained of the company concept. “With the truly phenomenal team we have assembled at Bridge, we’re building a platform that will leverage these tools to empower athletes to train optimally.”

The program is designed for what Folker knows best – elite athletes in high school, college, professional ranks and especially elite masters athletes, given Folker’s belief in using training to help extend careers. It centers around the idea of very specific workouts, as compared to the general fitness routines that many of these programs are struck with.

“Upon moving to the US on a collegiate swimming scholarship, I assumed that all my frustrations would be a thing of the past–surely the US colleges would have swimming-specific weight workouts and tracking systems,” Folker said of his experiences coming from Rugby-mad South Africa.

“You can imagine my extreme disappointment in realizing that this was not the case,” Folker added. “Just as rugby was the driving force and revenue-generator behind all sports science in South Africa, football drives the majority of content being used by US strength coaches in the college system. The majority of these folks are hired based on their football expertise and background, and subsequently assigned a non-revenue or Olympic sport to fill their daily schedules. This was absolutely mind-blowing given the dominance of the US Swimming team on the World and Olympic stage.”

“This frustration sparked the genesis of my own swim-specific strength & conditioning system. The system I developed throughout my collegiate and professional swimming career culminated in the 2000 Sydney Olympic Games, in addition to World Championships and Commonwealth Games meets. Since retiring from swimming, I have added a graduate degree in Kinesiology, and further developed/polished my system. As result, athletes who I have trained have combined to earn 22 Olympic medals, over 50 Olympic athletes and multiple World Championship medals, both long- and short-course.”

And so Folker ventures into a new realm, a more electronic realm, and a broader realm, but one that fits what he’s always believed: that every sport in the world is unique, and needs a unique set of training to achieve maximum performance.

The new service launches in mid November to 10 teams and 300 individuals, with a broader launch coming shortly thereafter.

Was at the website, was there any talk of a fee structure? Per team? Per athlete?

I used Bridge/FASST as the sole form of dryland conditioning this last year for my 18u men’s water polo team. It is fantastic for that age, and helped us pick up a first and third

…place at nationals, and send five players to Stanford, three to Cal, one to UCLa, and many to other schools(Ivys). That was all in one recruiting cycle! The cost was competitive, and the program is designed and implemented by the best – Folker, Liivamagi, Scharf, Tyrell. Good luck in future endeavors Nick, we appreciate all of your help with Bridge!