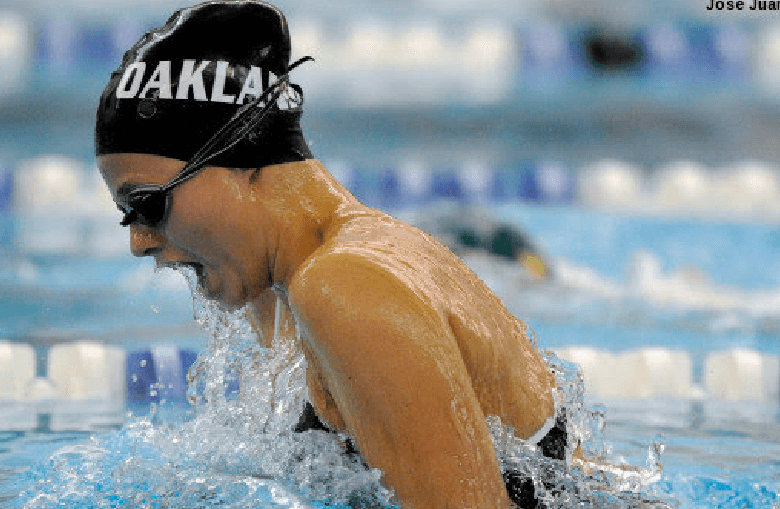 The UWM women won every swimming event on the night, but still trail Oakland in team points. The Grizzly men are in firm control, with Cleveland State second. Archive photo via Jose Juarez

The University of Wisconsin – Milwaukee Panthers swept every swimming event on the women’s side, but even so, the Oakland Grizzlies still lead in team points. The Grizzly men have found similar success, leading the men’s meet by 68 and winning a pair of titles on night 2.

Milwaukee kicked off their sweep with Natalie Johnson‘s Horizon League championships record 4:51.81 in the 500 free. She knocked off the 2010 record set by former UWM Panther Danielle Wenger, and won the race with ease. The closest competitor was Oakland’s Patricia Aschan in 4:54.18, and the conference’s defending champ Melanie Waszak of Chicago took third with a 4:54.98.

In the 200 IM, Milwaukee star Emily McClellan dominated by the same roughly-three-second margin, going 2:00.34. That’s about what she went at this meet last year, and still a half-second off her 2012 meet record, but she’s likely saving her best stuff for the national championships next month. She didn’t really need it in this race anyways – the runner-up was Karin Tomeckova of Oakland at 2:03.37, and the next finisher was a solid second-and-a-half behind her at 2:04.85. That was Tomeckova’s Grizzy teammate Takara Martin. Oakland swept spots 2-4 in this one, with Megan Hunter taking fourth ahead of Milwaukee’s Sierra Townsend.

The final individual win for UWM went to junior Anna Yontz in the 50 free. She went 23.24 to outpace the field, cutting a half-second off her prelims time. Second was Cleveland State freshman Rowan Elbadry, who went 23.49 to just touch out Green Bay’s Parker Wolf (23.51) and Oakland’s Allison Bellford (23.52).

The 400 medley relay went to Milwaukee, who touched out Oakland by three tenths for the title. The Grizzlies jumped out to a huge lead on Karin Tomeckova‘s 55.0 backstroke split, but that was erased in a hurry by a flying 58.6 from Milwaukee’s Emily McClellan. Oakland outsplit the Panthers over the final two legs, but it wasn’t enough to overcome McClellan’s lead and run down UWM, who won in 3:40.99. Oakland finished in 3:41.29 for second place. Joining McClellan on that championship relay were Becky Yokosh, Diana Del and Sierra Townsend.

Despite that relay loss and the sweep of swimming events by Milwaukee, Oakland still leads the women’s scores by 28 points. Milwaukee is second, with those two well checked out from the field.

Oakland also won the 200 IM, with freshman Tuomas Kiviluoma crushing a record of his own. His 1:47.57 took a second and a half off the old meet and conference marks. Also under those records were an amazing four other swimmers. Kile Aukerman of Wright State went 1:48.07 for second place, just out-touching defending conference champ Willem Poelmans of Green Bay by .01. Oakland’s Mario Rusnak and Wright State’s Clement Quilliec also got under the old record at 1:48.69 and 1:48.73, respectively.

Oakland finally dropped an event in the 50 freestyle, where Cleveland State senior Alex Lewis blew away the field to become the first man under 20 seconds at the Horizon League Championships. His 19.81 won by over four tenths, beating out Wright State’s Lucas Osgood, who was 20.23. Third went to another Cleveland State Viking, Adam Ingledew, who went 20.34, and oakland’s top finisher was freshman Jeremiah Morren in 20.43 for fourth.

Cleveland State made it two in a row to end the night when they won the 400 medley relay. The Vikings’ 3:13.73 was powered largely by breaststroker Nathan Grant’s 53.48 and Lewis’s 43.0 anchor leg coming off his big 50 free win. Oakland took second with a 3:14.26, getting their own 43.0 from Grant Harding on the end as well as a 47.7 from butterflyer Tuomas Kiviluoma.

Wright State wound up third in 3:16.14, but the most impressive split of the field might have come from 4th-place Green Bay, where breaststroker Ryan Korslin put up a 52.46, going out in 24.00. Korslin is the defending champion in the 100 breast, and looks to be much faster than his 54.8 that won last year’s event. He may even have a shot at the conference record of 52.94 set back in 2009.

After two days, Oakland leads pretty convincingly over Cleveland State, although there’s plenty of swimming yet to come. UIC is third and Milwaukee a very close fourth.