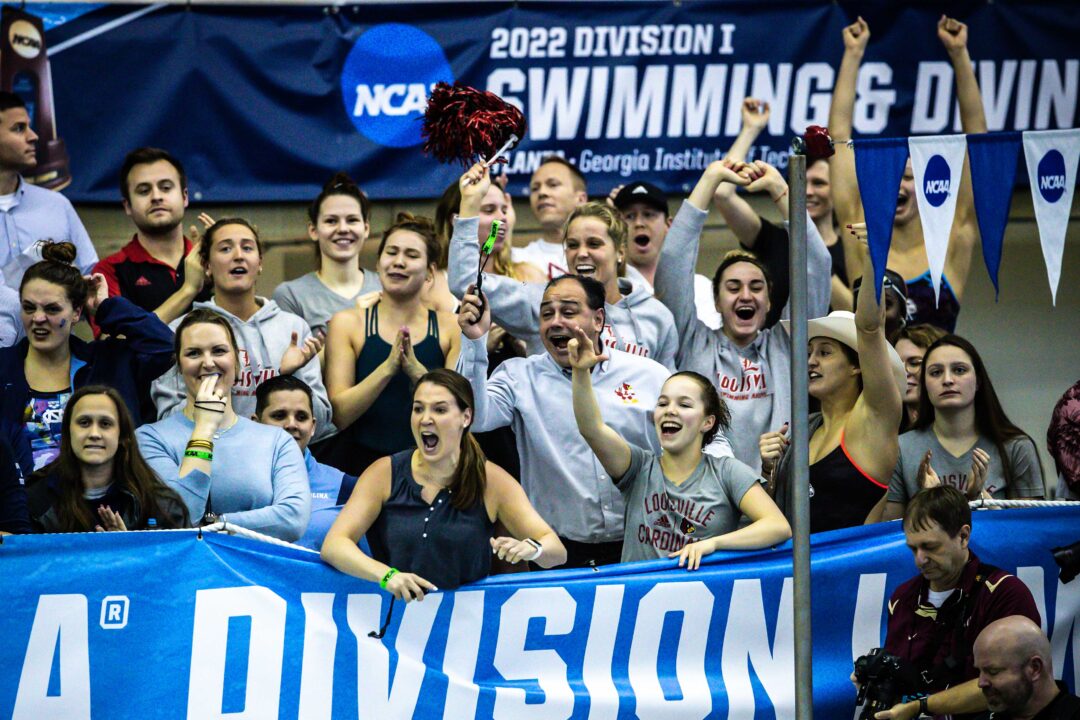 The Xavier Muskeeters crossed the Ohio River Friday to take on the Louisville Cardinals in Louisville in what’s become the traditional first meet of the season for both teams lately. As is also tradition, the #6 Cardinal women and #13 men both easily won over the Muskeeters, with the women winning 181-78, and the men 169-89.

The Cardinals recruiting class came in at #12 in our rankings, and the rookies made an immediate impact.

Paige Kuwata had an impressive debut as a Cardinal, taking part in four victories. The former Sandipers of Nevada swimmer won the 1000 free in 9:54.15, followed that with a 2:02.58 in the 200 fly, and then finished her individual competition with a 4:53.47 in the 500 free. In true (former) Sandpiper fashion, as if those 1700 yards weren’t enough, she anchored Louisville’s 400 free relay in 52.05, helping that squad to the win as well.

Fellow freshman Cecilia Viberg also had a great day. The German national swept the breaststroke events, going 1:03.07/2:20.92 in her first yards meet. She also swam breast on Louisville’s A medley relay, which won in 1:41.69, although full splits don’t appear to be available.

Meanwhile, veteran Gabi Albiero strayed a bit from her normal sprint free/fly event lineup. She actually swam breast on the Cardinals’ “B” medley relay and then took 2nd in the 100 breast in 1:05.69 before winning the 100 fly in 53.36. Senior Christiana Regenauer swam fly on that medley relay, and she followed up a with a 23.07 in the 50 free.

While not quite to the same extent as the women, the Louisville freshmen figured prominently in their first meet in Cardinal livery. South African national Guy Brooks earned a win in his first individual swim as a Cardinal, taking the 200 free in 1:37.80. Brooks also took 4th in the 100 free (45.47) and exhibitioned the 100 fly, touching in 50.58, the 3rd-fastest time overall.

Building off a strong championship season last year, sophomore Denis Petrashov swept the breaststroke events with times of 56.24/2:03.19. Petrashov seems poised to fill the void left by the departure of Evgenii Somov after his five years as a Cardinal.

Senior Ilia Sibirtsev got the competition rolling with a 9:17.52 in the 1000 free to get the individual events underway, and finished off the distance sweep with a 4:31.36 in the 500 free. Fellow NCAA qualifiers Gustavo Saldo and Dalton Lowe came away with wins too. Saldo took the 200 fly in 1:49.48. Lowe, who last year threw down one of the fastest 50 fly splits ever, actually swam backstroke on Louisville’s ‘B’ medley relay, but he won the 100 fly in 48.61.

The Louisville men won 169-89 and the Louisville women won 181-78 to extend the winning streak over the Musketeers to seven straight.

The Cardinals women started the meet out with a win the 200 medley relay. Abby Hay, Cecilia Viberg, Christiana Regenauer and Julia Dennis combined for a time of 1:41.69.

Xavier’s Jon Bernard won the men’s 100 backstroke with a time of 51.26. Millard Jackson was the top Cardinal finisher, posting the second place time of 51.90.

In the women’s 100 freestyle Tristen Ulett put up the winning time of  51.09 with Julia Dennis touching second with a time of 52.82. Abdelrahman El-Araby won the men’s 50 free with a time of 44.61, just edging teammate Michael Eastman’s 44.77. Guy Brooks made the race a Cardinal sweep with a third place time of 45.47.

Cecilia Viberg won the women’s 200 breaststroke with a time of 2:20.92 for the Cardinals. Teammate Abby Hay was second with a time of 2:23.65. In the men’s event, Denis Petrashov put up the winning time of 2:03.19, beating the rest of the field by four seconds.

In the 400 free relay, the Louisville foursome of Christiana Regenauer, Julia Dennis, Fernanda Celidonio and Paige Kuwata combined for a time of 3:26.42. In the men’s event, Murilo Sartori, Abdelrahman El-Araby, Caleb Duncan and Jacob Pishko boarded a time of 3:02.65.

LOUISVILLE – Xavier men’s and women’s swimming opened up the dual portion of the 2022-23 schedule on Friday afternoon at Louisville, taking part in 16 races on both the men’s and women’s at the Ralph Wright Natatorium.

The Musketeers are next in action at the Akron Zips Classic, running from Friday, Oct. 7 through Oct. 8. Events are set to begin at 6:00 p.m. on Friday, and 9:00 a.m on Saturday.