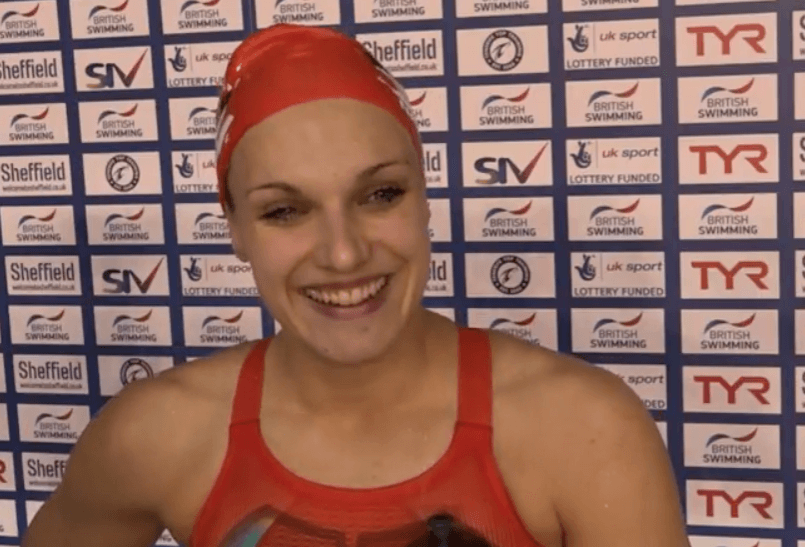 Catch up on the emerging and veteran talent taking to the Ponds Forge pool at the Swim England Northeast Championships. Ellie Faulkner claimed the women's 100m freestyle and 400m freestyle victories on day 2. Archive photo via British Swimming

On the heels of earning British Swimming’s ‘Emerging Athlete of the Year: Swimming’ award for her World Junior Championships gold this past summer in Indianapolis, Newcastle Swim Team’s Emily Large clinched the 100m butterfly victory at this 2-day meet. Clocking 1:00.84 in the morning session, the 16-year-old nearly duplicated her performance in the evening, touching in 1:00.88 for the title. The next-closest competitor in the event was another teen, Ciara Schlosshan of Leeds, who finished in 1:01.72.

Opting out of competing in her signature 200m fly event, Large took on the women’s 200m freestyle race instead, where she finished with the bronze in 2:05.11. Taking the title was 24-year-old Olympian Eleanor Faulkner of Sheffield, who touched in 2:00.93, well-off her mark of 1:57.88 which earned her the overall British national title at this same pool in April.

Faulkner was also the meet title winner in the 100m freestyle and 400m freestyle events. In the former, Faulkner notched a time of 56.94 to represent the only swimmer of the field to dip beneath the 57-second threshold. In the latter, Faulkner clocked 4:16.84 to claim victory by over 3 seconds.

Large’s Newcastle teammate Nicholas Pyle also made waves as a teen among veteran swimmers, notching the 100m backstroke victory in a time of 56.40. The 17-year-old was slighty quicker in the morning in 56.22, a mark which checks Pyle in as the 8th fastest British 17-year-old 100m backstroker of all-time.

Pyle also collected the 50m backstroke win on day 2, stopping the clock at 26.12 to take gold. The National Age Record for 17-year-olds stands at 25.54, so the Newcastle athlete will need to make some major moves to overtake that mark. But, his 26.12 effort moves Pyle into the 3rd-fastest position in the all-time British rankings of 17-year-old men in the event. For perspective, he has been faster than world record holder Liam Tancock and European Games champion Luke Greenbank both were at the same age.

By earning gold in the 200m backstroke also on day 2, Pyle completed his sweep of the discipline, as he won easily in a time of 2:02.65, just .24 off of his own personal best of 2:02.41 from this year’s British Championships.

Elite athletes Joe Litchfield and Olympic finalist brother Max Litchfield were both in action over the weekend, but making appearances primarily in the prelims sessions only. On day 1, Max Litchfield warmed up with a 51.96 100m freestyle before notching a 4:24.55 400m IM prelim swim, as well as a 2:21.94 mark in the 200m breaststroke.

Jay Lelliott, the men’s 400m freestyle silver medalist at the 2017 World University Games in Taipei, took the men’s 200m freestyle tonight in a modest outing of 1:51.83.