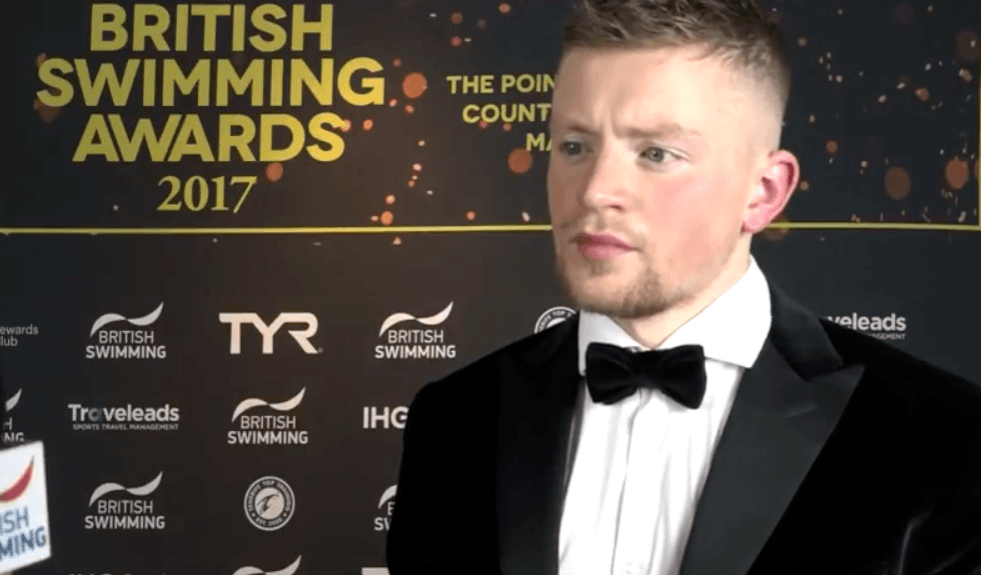 One of the most recognizable British faces among elite sport, the National Centre Loughborough aquatic athlete earned his nation’s first pool medal of the FINA World Championships in Budapest this past summer, crushing the men’s 100m breaststroke field. The 22-year-old also collected a new world record en route to 50m breaststroke gold, while also earning silver as a critical component of the British men’s 4x100m medley relay.

“I’m so proud to receive this award,” Peaty said. “To have been able to defend both of my individual world titles in Budapest this summer has been a real career highlight and something that many athletes don’t often get to achieve.

“I have to thank the brilliant team I have around me and the great setup I have in Loughborough, especially my coach Mel [Marshall], and it’s awesome to see her also win an award tonight.

“I am already looking ahead to the next few seasons, Tokyo 2020 is now firmly in my sights. It’s great to get the 2017-2018 season underway, I’m off on a warm weather camp to South Africa next week and then off to Copenhagen for the European Short Course Champs in December.

“Next year is going to be a busy one, where I’ll be looking to defend my Commonwealth titles on the Gold Coast and European titles up in Glasgow.”

British Swimming Chairman Maurice Watkins CBE commented,“My congratulations go to Adam Peaty for winning the British Swimming Athlete of the Year Award. He has had a fantastic year defending his own World titles, repeatedly lowering his own records and continuing to reaffirm his position as one of the swimming greats.

“The British Swimming Awards are a fantastic way of acknowledging and honouring so many of our athletes and coaches from across the aquatic disciplines for their hard work and dedication to the sports over the last 12 months.”

Chief Executive Jack Buckner said, “I would like to personally congratulate Adam for another year of truly outstanding sport that has seen him continue to raise the bar of swimming in the UK and globally.

“He is an athlete that continues to strive be the greatest every day and that is evident through his world record-breaking and gold medal winning season.

“As an organisation, it is wonderful that we are all able to come together to celebrate the achievements of all our athletes and staff across the aquatic disciplines. 2018 is set to deliver another busy sporting calendar for our sports and I look forward to continued success for British Swimming and all of our athletes.”

Also recognized during the ceremony was Newcastle Swim Team’s Emily Large, the 16-year-old World Junior Champion in the 200m butterfly. For her efforts, the teen was honored with the Emerging Athlete of the Year: Swimming award. Look for the flyer to take on senior international competition at the 2017 Short Course European Championships, as well as next year’s Commonwealth Games.

BRITISH SWIMMING ATHLETE OF THE YEAR

ATHLETE OF THE YEAR

EMERGING ATHLETE OF THE YEAR