Nevada, SDSU Separated by 2.5 Points after 2 Days in Mountain West 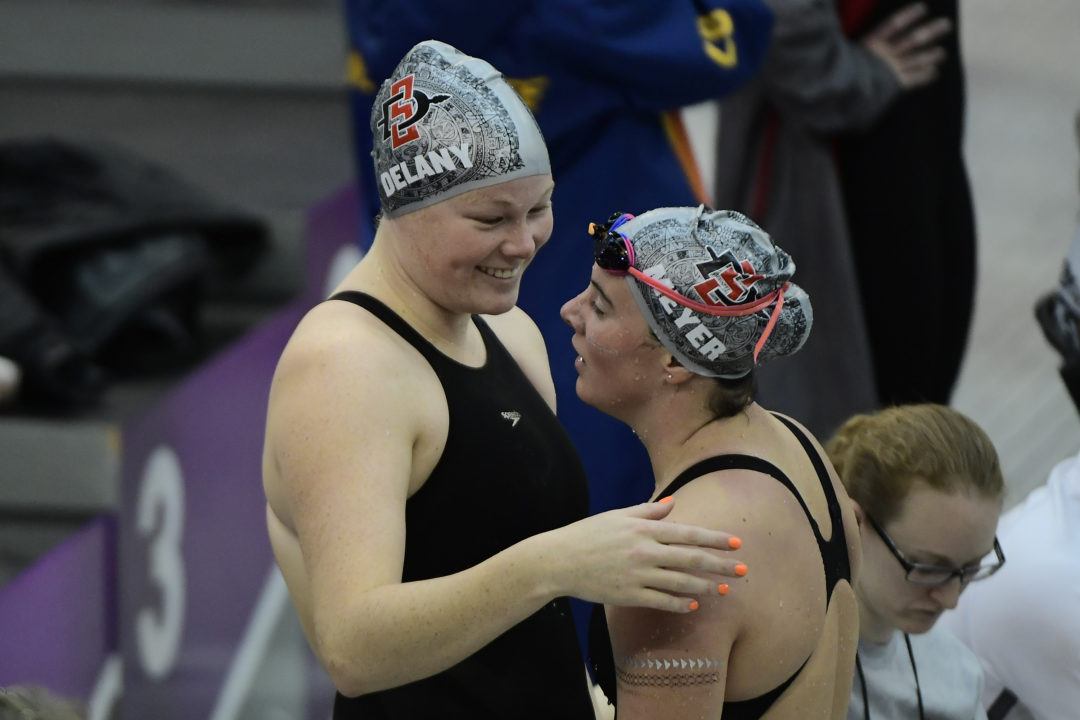 The San Diego State women have closed the gap to just 2.5 points after 2 days at the Mountain West Conference Championships. Current photo via Timothy Nwachukwu/NCAA Photos

The 2019 Mountain West Conference Championships may come down to the wire, as San Diego State cut Nevada’s lead to only 2.5 points, punctuating their assault with a Conference record 400 medley relay. Two-time defending champ Boise State could also contend for the win, and those three teams separated themselves from the pack on Day 2.

Adriana Palomino of New Mexico started off the evening with a comfortable win in the 500. Palomino had the lead by the 100 mark (54.60), and never looked back, finishing in a B-cut time of 4:43.63. Palomino was a model of consistency, with every split but the first in the 28-point range, and got her first 500 MWC title in her last chance after finishing 5th-3rd-4th her first three years.

The 50 free was enough to give San Diego State a 12.5 point lead, but the lead was fleeting, as Nevada put three in the top 8 in the 3 meter diving, including champ Isabel Vazquez. Vazquez scored 362.05 to win a narrow victory over Montse Urzua (361.20) of UNLV.

But San Diego State had one more arrow in their quiver, and it flew in the form of a dominant 400 medley relay. Elliyana Ferrin (53.33), Klara Thormalm (58.94), Courtney Vincent (51.45), and Alma Thormalm (48.56) combined for a Mountain West Conference record of 3:32.28. SDSU won by 4.3 seconds, and were only 0.08 seconds away from the A-cut. Particularly notable was Klara Thormalm’s breaststroke split, which puts her in contention to break a minute in the open 100 breast and challenge Maria Harutjunjan’s 2017 MWC record of 59.85.