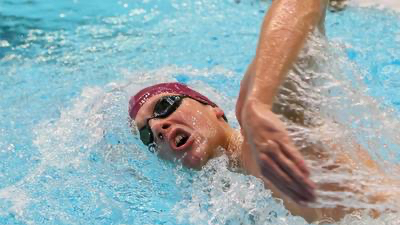 Texas A&M athlete Jake Gibbons is the only swimmer currently a member of the NCAA SAAC. He is also chair of the Southeastern Conference SAAC Stock photo via Jack Spitser/Spitser Photography

The definition of this phrase, otherwise known as CARA, offered by the NCAA is “any required activity with an athletics purpose that involves student-athletes and is at the direction of, or supervised by, any member of an institution’s coaching staff, including strength and conditioning coaches.”

SAAC will recommend to the Division 1 Council to adopt the legislation, which they will do ahead of the council’s meeting in September.

If the legislation is adopted, it would reinforce SAAC’s three main aims for the 2020/2021 season. They are:

SAAC held a virtual meeting on July 17th, their first since electing a new board in January of this year. The committee is currently chaired by Ethan Good, a former basketball student-athlete representing Bowling Green and the Mid-American Conference.

Alongside him are co-vice chairs Justice Littrell, a football student-athlete at Northern Colorado and Caroline Lee, a former women’s soccer student-athlete at Southeastern Louisiana. There is just one swimmer currently on the committee: Jake Gibbons of Texas A&M men’s swimming and diving,

As well as discussing the proposal, the executive board reiterated their desires for student-athletes to be more integral to Division 1’s governance, something which they believe this legislation would assist in doing.

The hashtag #ourvoice has been trending on twitter since the tweet below was put out yesterday with many student-athletes expressing their positive feelings towards the proposal.

According to America East representative and NCAA legislative committee member Kailyn Myshrall, this is the “first piece of legislation ever proposed” by the Division 1 SAAC.

Previously, the University of Wisconsin Athletics Department announced on June 12th that they will be foregoing “athletics-related activity” for their student-athletes ahead of the upcoming Election Day on November 3rd.

Director of Athletics at UW is Barry Alvarez who said: “Our objective is not to tell them who to vote for. We just want them to exercise their responsibility to have their voices heard and vote. I want to make that as easy as possible for them.”

How many students vote in the location of their college or university? Aren’t they just going to vote absentee anyway?

I was unable to find data on where students tend to vote. There is, however, evidence that a significant number of college students are voting in person at on-campus locations, and that this number is growing: https://www.nytimes.com/2019/10/24/us/voting-college-suppression.html

College students attending school outside of their home state can, by law, register to vote either in their home state or in the state of their school. There are a few quirks in the system by state; for example, in some states you must REGISTER in person to receive an absentee ballot.

Nope. Why would a college athlete vote absentee in Maryland when the vote actually counts in Wisconsin?

There are plenty of other races outside of the presidential that matter, Anonymous

Shouldn’t they all matter? Even at the state and local level where law makers can have a huge impact on taxes, income inequality, safety, housing, etc.

Or you could just go after practice

I expected a lot of this, because this is a swimming website, and swimmers think of themselves.

As “crazy” as a swimmer’s schedule is, a football or basketball player’s schedule is even crazier. Extra tutoring to stay eligible, media events, booster events, etc. that most swimmers don’t have to deal with to the same degree.

Further, while most swim meets are on weekends, many sports hold games/meets on election days. So, you could run into a situation where you’ve got class all day, then have a game that night, and there’s literally no time to vote that day. Depending on what state you’re in, you may/may not be able to early vote or get an absentee ballot.

You have to… Read more »

Swimmers train twice a day often. This is a good idea, full stop.

Why did this whole “full stop” thing become so popular?

“HEY GUYS, I’M ABOUT TO PUT A PERIOD AND CONCLUDE MY THOUGHTS BECAUSE I FEEL THEY NEED NO FURTHER EXPLANATION. JUST WANTED TO GIVE YOU ADVANCE WARNING. PLEASE DON’T ATTEMPT TO DIALOGUE UNLESS IT IS TO COMMEND ME ON THE VERACITY OF MY CLAIMS.”

Because it adds extra emphasis that further discussion is not needed.

or you could just take one day off to vote/educate for probably one of the most important elections to date?

There are several hours in the day