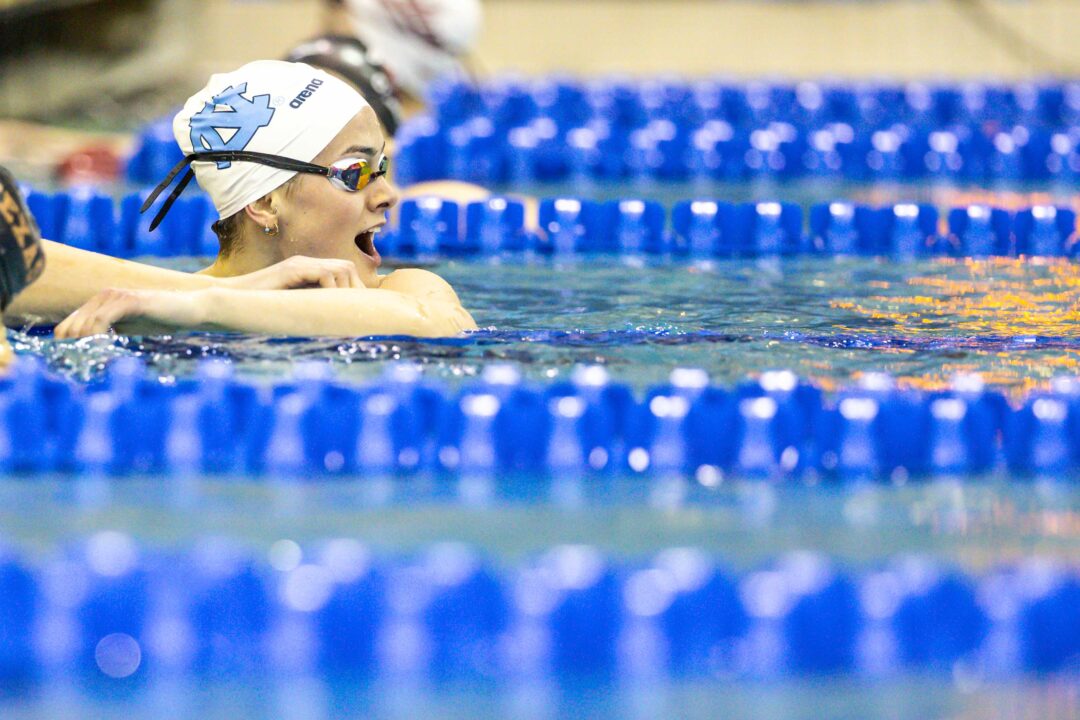 Countie (above) and Lindner combined for a total of 47 individual points at the 2022 NCAA Championships. The Tar Heels went on to finish 14th. Archive photo via Jack Spitser/Spitser Photography

UNC seniors Grace Countie and Sophie Lindner have both announced they will be returning to UNC for a fifth year via Instagram.

Countie told SwimSwam that she wanted to use her fifth year because she “love[s] the program and school. My teammates are irreplaceable and some of the best people. I could not imagine going through the grind with any other group of people. Also, I feel like my job is unfinished after last year. There are things that I want to accomplish and goals I hope to reach for myself, and for my team. I hope to use this last year. to make more memories, to grow as an athlete, and to enioy UNC for all it is worth.”

Lindner told SwimSwam that she will be returning to UNC to use her fifth year as she earns her master’s in accounting at the business school. Lindner said that her motivation for returning was because “I felt that I have not yet accomplished what I know I can accomplish in the pool. Additionally, the opportunity was presented to me and I didn’t want to pass that up-I still very much love swimming and all that comes with it in college and am not ready to be done.”

Lindner also spoke of some ways her past three seasons at UNC have been impacted as “sophomore year NCAAs was canceled. dueto COVID, I got COVID the week of my junior year ACCs and then got mono during the fall of my senior year.” She said that she “felt like I missed out on a few meets and wanted one more shot at a (hopefully!!) regular college season.”

Athletes were allowed an extra year of eligibility due to COVID-19 during the 2020-2021 season. Many athletes took this extra year this season, and although the number is expected to fall over the next few years, that has not seemed to have happened as dramatically so far for next season.

The biggest difference between this season’s fifth years and future season’s is the scholarship cap. Women’s swimming is allowed  14 total scholarships per team. This season, 5th year seniors didn’t count toward that cap unless they transferred. In future seasons, 5th year seniors will count against the cap, until the waiver expires. This means that both Countie’s and Lidner’s scholarships next season will count towards the 14.

The return of both swimmers is huge for UNC as they return a combined 47 NCAA individual points and 140 ACC individual points. Over the last four years, the UNC women have risen from finishing 42nd at NCAAs in 2019 to 14th in 2022.

This is big news for the Heels! Probably the biggest news since Hal Wansley and Brad Kline committed to Carolina in the late 90s. Those were some epic days when Antawn Jamison, Brad Kline, and Hal Wansley were all on the Hill representing Charlotte Providence. They were thick as thieves those 3. Epic stories. I hear they have a social group now in Charlotte called the Ram BOYZ. Hope these current Heels have as much fun as those guys did.

Lindner’s leadership and speed has been a catalyst for the team over the last few seasons. No doubt this season will be special!

Any truth to Jonah Turner joining the coaching staff? That would be earth shattering for the Tar Heels. Top 10 coach in the country returning to his alma mater

So glad they are back! UNC gets better and better.