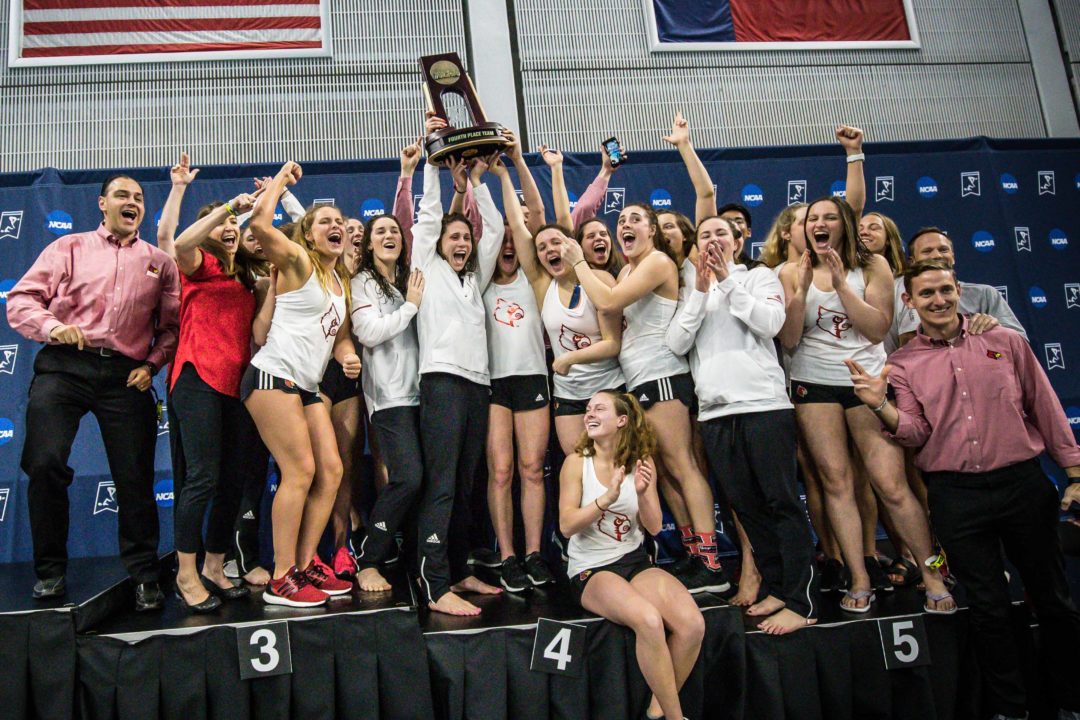 The NCAA confirmed in an email this week that ‘virtual swim meets,’ which have become a hot topic of discussion for a workaround to more normal swimming competition in the coronavirus era, will not be considered bona fide events under NCAA rules.

Under swimming & diving sport rule 9, the definition of a bona fide meet is as follows:

“Competition is between two or more teams of the same gender at the same time and site, from different collegiate institutions;”

Because the teams must compete at the same time and the same site, these competitions could not be allowed as bona fide under NCAA rules.

The NCAA does say that it would count toward individual and team dates of competition for NCAA Bylaw 17 regarding competition dates, but does not satisfy NCAA Bylaw 20 regarding sport sponsorship.

This is significant for a number of reasons, the first of which has to do with NCAA qualifying standards – which must be set in bona fide competition. This has become an issue in prior years, most notably at the 2018 Liberty University-hosted Last Chance meet, where it was determined that the men’s meet was not bona fide because East Carolina was the only men’s team there. This negated some NCAA Championship qualifying times.

Times from these virtual meets also wouldn’t count for NCAA Records, though if otherwise approved they could be considered for U.S. Open or American Records.

While teams usually target 2 or 3 meets in a season for swimmers to hit qualifying times, divers could be more dramatically impacted as their zone qualifying marks could come from any number of different meets.

The bigger, and possibly more concerning issue, surrounds how this would impact NCAA Bylaws 17 and 20.

Bylaw 17 relates to both ‘athletically countable’ activities as well as competition maximums. In swimming & diving, teams face a maximum of 20 dates of competition in a season, and the NCAA says that virtual meets would count against this total.

Why These Rules Exist

Much like accounting rules in the post-Enron era, the crux of these bona fide rules is that the more people that need to become involved in a fraud for it to work, the more likely it is that the fraud will be uncovered.

By-and-large, we like to view collegiate coaches as ‘good people,’ and most of them probably are. But, as is obvious by a perusal of the NCAA major infractions database, temptation and good intentions can lead people down a path of deceit.

In a sport where tenths of even hundredths can be the difference between everything or nothing, these sorts of things matter.

While a change of the rules is unlikely before the start of this NCAA season, the NCAA does have a process to issue waivers to workaround rules in extraordinary circumstances.

The NCAA says that waivers have been put in place to allow for a reduction of the minimum number of required competitions for some divisions, though did not specify if this would reduce required dates for swimming & diving. It’s likely that, at a minimum, schools would have to apply for those waivers, which adds a crucial administrative step.

Schools could also apply for waivers allowing virtual meet results to be allowed, but that would kick it to the NCAA to approve those waivers.

A few other possible workarounds that teams might employ could be to combine results from multiple in-person dual meets to create a sort of ‘virtual invite.’

As proposed by University of Virginia associate head coach Tyler Fenwick on the SwimSwam Podcast episode released today, teams could hold a ‘virtual quad’ meet. In this scenario, there could be two sites with two teams each. For example, Virginia and Liberty (70 miles apart) could have a dual meet in Charlottesville while the University of Georgia and Georgia Tech (70 miles apart) held a dual meet in Athens.

This would reduce the risk that longer travel would have toward spreading the coronavirus since there wouldn’t have to be any stops or overnights, and could also reduce the costs associated with longer trips. Then the quad could compare results.

While the ‘team scoring’ is not really a concern for most teams for most meets, this strategy could be employed in a larger conference like the SEC to divide up into a multi-site conference championship meet, reducing total travel costs across the conference, as well as reducing the number of teams jammed onto one deck.

Would it work if each school sent two people, a male and a female, to the university they are facing to compete as a representative to legitimize the meet?

Essentially an intrasquad meet with one person from the other team.

That would only count the times for those swimmers who are there in person.

How does this work if the championships get cancelled in the spring? Do they lose a year of eligibility because the had virtual meets? It may not be out of the realm of possibility that no in person meets happen this year.

True…I’ve been wondering that if at least a large part of the season gets cancelled, will the NCAA grant them an extra year of eligibility?

The Ivy League has said that for sports that have had their season cancelled, if they don’t redo it in the spring, it won’t count as a year of eligibility, though their “5 years to play 4” clock will continue to run.

Same site to me implies that both teams must be in the same building but not necessarily the same pool. For example, splitting a long course pool and having each team race on opposite halves. They’d be sharing the same water, but in theory the teams wouldn’t have to come within six feet of each other at any point in the meet. Stretching that further, could teams race in completely separate pools as long as they’re in the same building?

Yes, I think so. We actually asked that question for clarification as well. The reason we didn’t include it above is because our presumption is that once teams show up at the same building, they’d probably just get in the water and race.

Just do swim meets and have the teams sit in opposite sides.

Seperate the warm up pool in a similar fashion.

This isn’t that hard to do.

As a college D1 swimmer I would rather cancel the whole season than do a virtual meet. Might as well do 8 intrasquad meets if that’s the case

Thank you for stating the obvious. Top athletes thrive off of real competition.

I am also d1 – I honestly dont think it would be that bad. If the teams were really clever, there could be live result sharing, and the teams could alternate which team swam first for an event. IE, if I know the other team went a 21.0 in the 50, I’d have to beat that, but then I would swim first for the 100 free next.
Its not perfect, but at least its something

Imposter! You are D2!

0
-2
Reply
The Importer AND Exporter
Reply to  Billybeebob

But if you’re not competing even virtually, what’s the school’s motivation to spend resources on you? Are you willing to give up training and your teammates if virtual is the only path forward and you dont like it?

3
-4
Reply
Pennsylvania Tuxedo
Reply to  The Importer AND Exporter

…and not just give them up, but do so forever. Your team wouldn’t take a one year hiatus, the school would never bring the team back after not sponsoring it for a year.

Or just run meets. Have we lost all creativity? Not hard to have social distancing in a non contact sport. 2 open lanes in the middle would suffice. Teams are practicing with each other every day so very limited increase in risk with a dual meet and proper measures in place.

Americans used to be known for their ingenuity. Now we are afraid of our own shadows. It’s sad.

“Teams are practicing with each other every day so very limited increase in risk with a dual meet and proper measures in place.” It isn’t just the meet environment. It would also be the prospect of teams travelling and social distancing would be difficult when you add in travel.

Greg, let’s be real here. You don’t think these kids will be hanging out all the time outside of the pool?

As opposed to what’s happening at practices and in dorms as it is?

1
0
Reply
DrSwimPhil
Reply to  The Importer AND Exporter

Maybe there should be bigger voices/fights for this to NOT be the “only path forward”?

It’s another annoying/disappointing example of an unwillingness to modify things to work in this unique pandemic environment. A time achieved should be a time achieved.

I don’t think they said they’re unwilling to modify, and in fact the article above specifically states how these things get modified.

You mean read the whole article before commenting? Impossible!