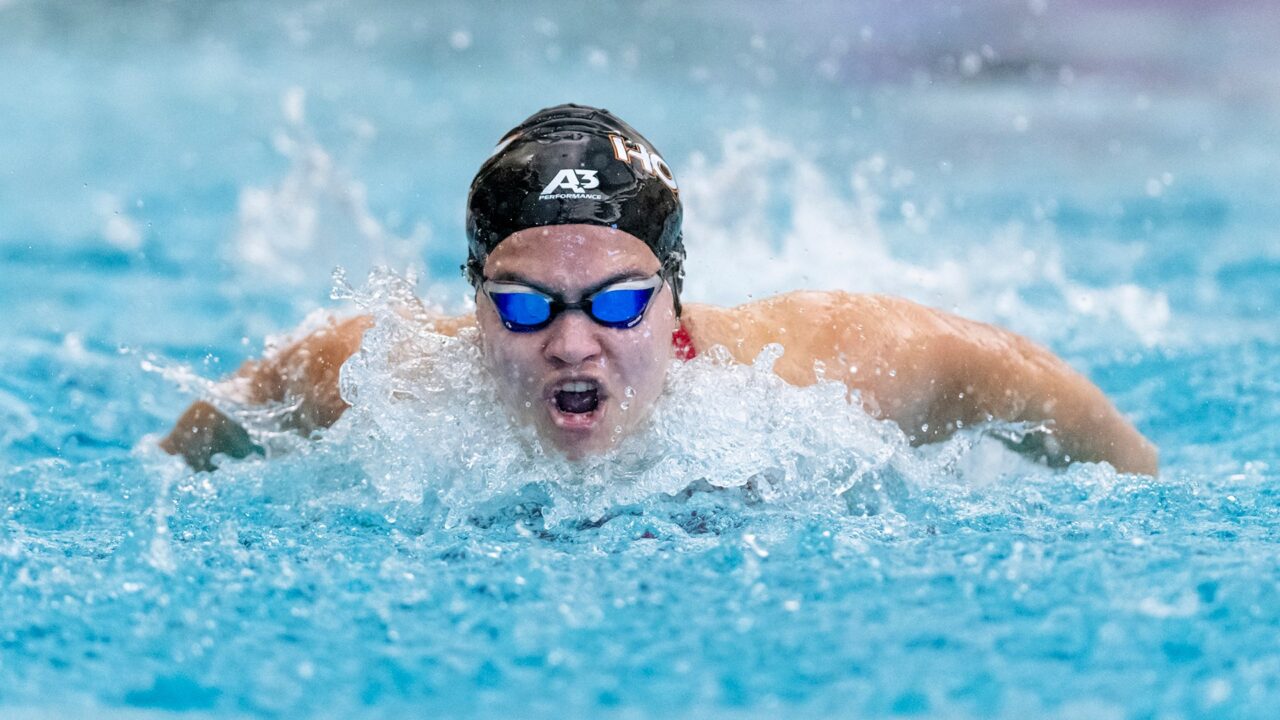 Luana Alonso, a Paraguayan Olympian who qualified for the NCAA Championships in the 100 fly last season, has entered the NCAA Transfer Portal. Archive photo via Virginia Tech Athletics

NCAA qualifier Luana Alonso of Virginia Tech has entered the NCAA Transfer Portal. The Paraguayan Olympian qualified for the 2022 NCAA Championships for Virginia Tech, finishing 30th in the 100 fly individual in a best time of 52.29.

Alonso was one of 9 Hokies swimmers (along with 1 diver) who qualified for the NCAA Championships. That was the most qualifiers in program history.

Alonso was a bit of an outlier by earning an individual invite to the NCAA Championships, but not having any other “B” cut times to swim additional individual events. In fact, her best 100 yard fly time from her freshman season in Blacksburg was half-a-second better than her best 100 yard free time.

Alonso currently holds 6 Paraguayan Records, mostly in butterfly events, but also in the 50 backstroke in long course. She previously represented her country internationally at several events, including the 2019 World Junior Championships.

She was one of two international swimmers who entered the Transfer Portal for Virginia Tech last week. New Zealander Luan Grobbelaar also went in to the portal. His best finish at the ACC Championships came in the 400 IM, where he placed 18th in a time of 3:49.43.

No more loyalty to a school in any sport. It is difficult for me to understand how one can leave their friends and start over elsewhere. Never thought this rule would affect the swimming programs.

well one of them was kicked off so…

She is leaving because of “mean girl” female snitches on the team that Luana was faster than.

This is not what happened at all. Please get your facts straight before you comment on someone else.

Well there is that, but the girl was never welcome from the beginning and to “somebody who actually knows,” you KNOW that is true when she was swimming faster than the other butterfliers and earning her spot on relays from others. One in particular felt threatened from her in the beginning, pouting and using “team rules” to get her in trouble at every chance she got where certain things may have been overlooked in the past that wouldn’t have been a big deal. You’re not fooling anyone. It was obvious to everyone on the team. This past year on the girl’s side was incredibly toxic due to poor leadership. You can’t expect throwing a 17 year old girl in the… Read more »

Unless you are on the team, you have no idea what the truth is. Coming from someone who has seen this team grow and prosper over this past year, I KNOW that each and every one of those girls took pride in trying to make the team better in every aspect. Leadership was not the problem, competitiveness was not the problem, the problem was someone lying and breaking rules without any remorse. It’s no secret that she broke rules and lied about it. As a team, we hold everyone accountable for their actions, which includes those who break the rules. She is transferring because she believes that this team is not right for her. That is her decision and it… Read more »

There was a HUGE problem with leadership, competitiveness and yes she did break the rules. Never said she didn’t. Yes, that wasn’t part of the reason she left, but it wasn’t the only reason. She was never welcomed or embraced on this team by those who saw her as a threat. If everyone was held accountable for their actions as you stated more people than just Dylan Eichberg would had faced serious consequences other than just slaps on wrists for the same issue. Yes it is her decision, but Virginia Tech made it an easy one. Bottom line, the girls team this past year was nothing but a bunch of tattle tales using rules to advance their own agenda on… Read more »

And there is also a reason I stand with a fake name and anyone on the team would understand why so it’s laughable. If you know you know. Get your head out of the sand and really look hard. It’s pretty easy. How many freshmen quit this year?

It’s like y’all came here to try to protect the program from whatever negative PR you thought you were protecting the program from. In reality, every was going to shrug and move on until y’all decided to own thyselves in the comments.

It’s actually funny that y’all thought this was somehow what the program needed lol.

Hard to believe, but not everything on the internet is true buddy. None of what hokieknows said is true. You’re being a sheep.

Oof. Imagine reading my comment and thinking I was talking about what HokieKNOWS said and not what AJ Pouch or Emma Atkinson said. Or the other VT swimmers who ran here to rip her.

Sometimes I miss the lack of self awareness of an 18-22 year old. Blissful unawareness <3. Don’t change, bro.

“Lol” and “Ur Lost Bro” – please adhere to SwimSwam commenting policies and stick to one username in any given comment section. Thank you.

Just as a follow-up, I think some of the confusion here is that AJ Pouch had left a comment and then deleted it, sharing information that Luana told him while crying in his car.

When that comment was deleted, several other comments were re-threaded to HokieKNOWS, but they were originally a response to AJ Pouch.

9
-1
Reply
Somebody who actually knows
Reply to  HokieKNOWS

She’s leaving because she got in trouble breaking team rules. She could not handle the repercussions of her own actions. Not because of jealousy.

When do we find out she’s going to SMU?