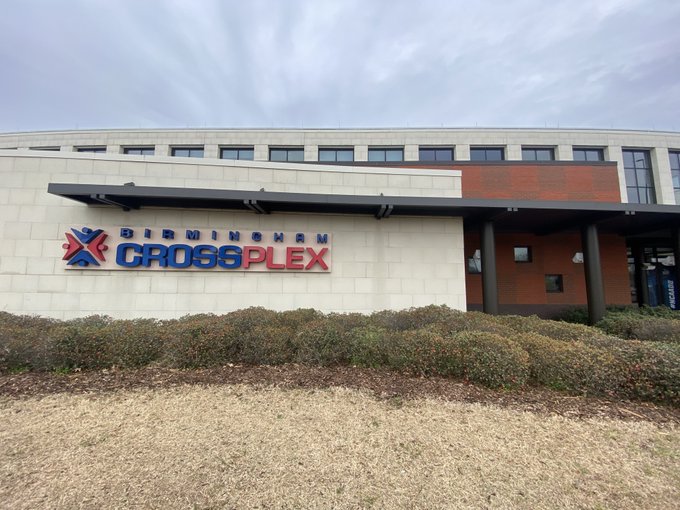 The NCAA has announced it will postpone Day 1 finals of the 2021 Division II Championships owing to weather warnings in the Birmingham, Alabama area. Current photo via NCAADII (Twitter)

The NCAA has announced it will postpone Day 1 finals of the 2021 Division II Swimming and Diving Championships owing to weather warnings in the Birmingham, Alabama area.

The meet was able to run as planned this morning, with all the swimming having been completed before the announcement was made. The diving prelims had not yet begun.

From what SwimSwam has been told, Wednesday evening’s finals session will take place Thursday morning. All of Thursday’s events will swim as timed finals in the evening.

Due to weather warnings in the Birmingham area, the City of Birmingham will be closing the CrossPlex for the remainder of the day. The #NCAAD2 Swimming & Diving Championship will be postponed until Thursday at Noon ET. pic.twitter.com/BpS0GOn3KL

The storm moving across the Southeastern United States Wednesday could impact as many as 50 million Americans.  Powerful tornadoes, winds of up to 80 miles per hour, and golf ball-sized hail are possible in the “moderate risk” area of the storm, and Birmingham is located in the “high risk” area.

According to MontgomeryAdvisor.com, Gov. Kay Ivey declared a state of emergency that went into effect at 6 p.m. Tuesday.

“The threat for potentially dangerous weather is rising for much of Alabama,” she said. “Out of an abundance of caution, I have issued a state of emergency for all 67 counties to ensure we are ready to act in any way needed from the state level.

“Projections are showing that this will likely be a widespread event, with some of the most severe weather anticipated late Wednesday night into early Thursday morning. Please make preparations now in the event your area is impacted in some way. I will continue keeping a close eye on the system and encourage every Alabamian to do the same.”

⚠️SEVERE THREAT UPDATE: The HIGH RISK has been extended eastward, to now include more of Central AL. The bottom line is that it doesn't matter if you're in the high or moderate risk area – impacts will be very similar. JUST BE PREPARED!! #alwx pic.twitter.com/9sb1bNm749

Absolutely heart breaking for these athletes after what happened last year.

Here’s to hoping the meet can be completed safely.

Much love to all the swimmers and divers. Thinking of you all lots.

Just awful- I mean I am glad they are being safe but D-II swimmers can’t catch a break..

Will they really be any safer at their hotels?

Goal is to keep people off the roads.

Weather looks to be very severe in Tuscaloosa today. The whole state is going to experience violent storms

d2 ncaas is lowkey cursed. lowkey was wondering if it was april fools or something. then i realized it was march.

Dang! Two years in a row of these athletes getting thrown upside down at the meet.