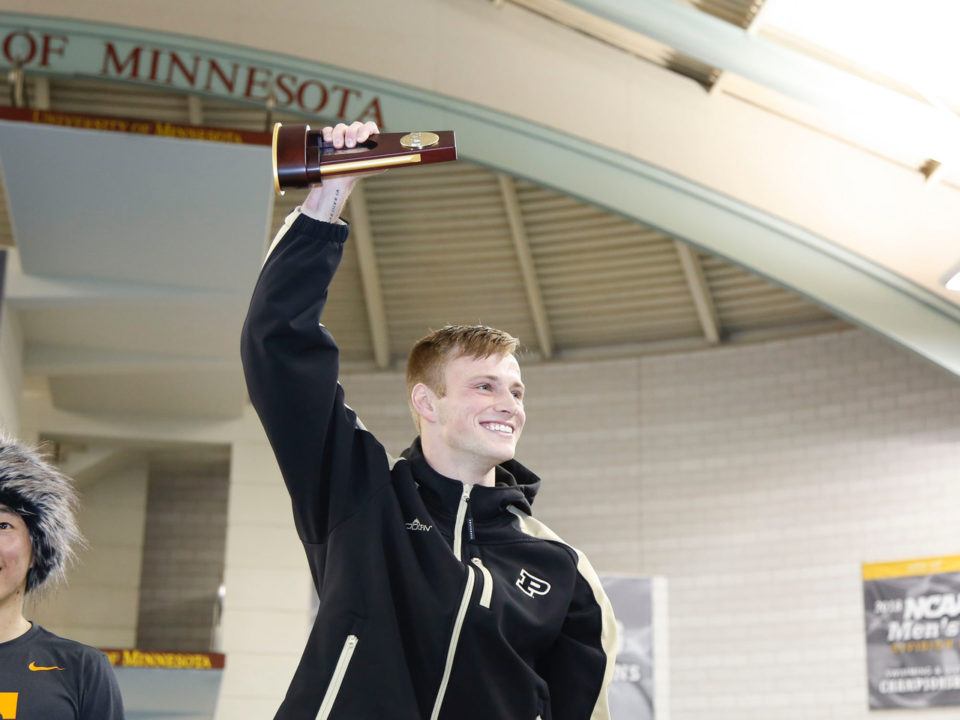 It’s not amazing, but it’s a start. Happy to be diving again! pic.twitter.com/m1jcoX6pTi

Johnson, a senior at Purdue University, missed part of last season (early November to late January) after he suffered a stress fracture in his right foot. While still recovering, he made his return at the Minnesota-Northwestern-Purdue tri-meet on January 30th. There, he took a few minutes to talk synchro training, injury, and married life with SwimSwam.

He capped off his 2018 season with one of the most exciting NCAA diving wins in recent history: only nine points behind the leader with one 3-meter dive to go, he signaled to judges that he would be switching from a forward 3 1/2 somersault pike to a forward 4 1/2 tuck, upping his difficulty from 3.1 to 3.8 (the highest degree of difficulty possible for a 3-meter forward tuck). That change would prove to be pivotal, as he would score 96.9 to win the event 499.35-495.15 over Tennessee’s Zhipeng Zheng, who scored 83.70 on his final round due in part to a low difficulty (3.1).

Still nursing the injury, he discussed his rehabilitation process after the win.

After undergoing surgery on his foot September 28th, according to his Twitter, Johnson was allowed to walk without crutches (wearing a boot) last week. Purdue told SwimSwam that it “will not be releasing a timeframe on Steele’s potential return this season” – but his presence is key to the program’s success on the national level.

Purdue is ranked #16 on SwimSwam’s November power rankings thanks to its diving potential, and Johnson alone scored 44 of Purdue’s 54 total 2018 NCAA points – all of which came from divers.

I like that the article states that 3.8 is the highest DD possible when in fact it is not. It’s just the highest somewhat commonly performed at the moment. The highest listed on the FINA chart for Springboard is 4.8 (209B).

The article does not say that 3.8 is the highest DD possible. It says “the highest degree of difficulty possible for a 3-meter forward tuck“. 209B is neither a front dive nor is it tuck position. 209B is a back 4-1/2 pike. #readingcomprehensionmatters

Was the article corrected as a result of your comment? I was reacting to the snarky opening “I like that…”

On a separate note, how are the “Swimming Athenas” doing this season? Speedy times?