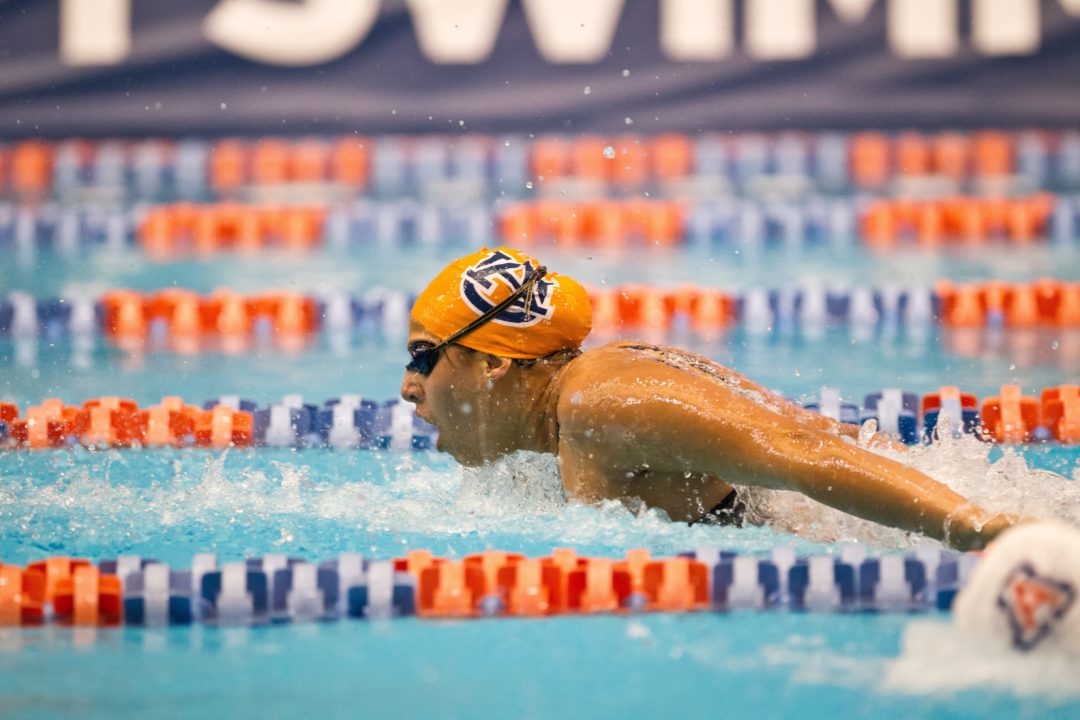 Auburn's NCAA Champion Olivia Scott is not with the team currently as she works through some personal issues. Archive photo via Tim Binning/TheSwimPictures.com

2013 NCAA 100 butterfly champion Olivia Scott is currently “taking time away” from the Auburn Tigers’ collegiate program. A source close to the Auburn program, who requested anonymity because he or she was not authorized to talk on the matter publicly, says that Scott is trying to work through some personal issues, and that no decision has been made as to whether she will swim at the SEC or NCAA Championships. For now, though, she has been described as being “off the team.” The matters are not related specifically to swimming.

Scott, a senior, would be unlikely to earn a redshirt for this season given how much she’s participated so far, though the NCAA would have to make that decision at year’s end if she doesn’t return.

Scott was the anchor of the Auburn program in the 2012-2013 season where the Tigers finished 13th, and was their lone NCAA Champion at that meet. She took the title there in the 100 fly in 51.64, beating out Cal’s Rachel Bootsma and Florida’s Ellese Zalewski, two of the hottest swimmers at the meet, by less than .05 seconds each.

Scott’s best time so far this season in the 100 fly was a 53.89, which ranks her 4th on the team and 17th in the SEC. Other viable options for Auburn to use on their medley relays without Scott include sophomore Alex Merritt, senior Emily Bos, and junior Megan Fonteno, whose best this year have ranged from 53.2-53.6 in the race.

Scott was also a semi-finalist at the 2012 Olympic Trials.

Best of luck to her. Hope she is able to come back

I wish Olivia the best as she works through her issues. She has represented the Tigers very well and I would love to see her back in the pool. No matter what happens with the rest of her swimming career she is one of the few who can call themselves an NCAA champion.

Hope she can work through her challenges and get back in the pool. However, she’s a great competitor no matter what her future holds!