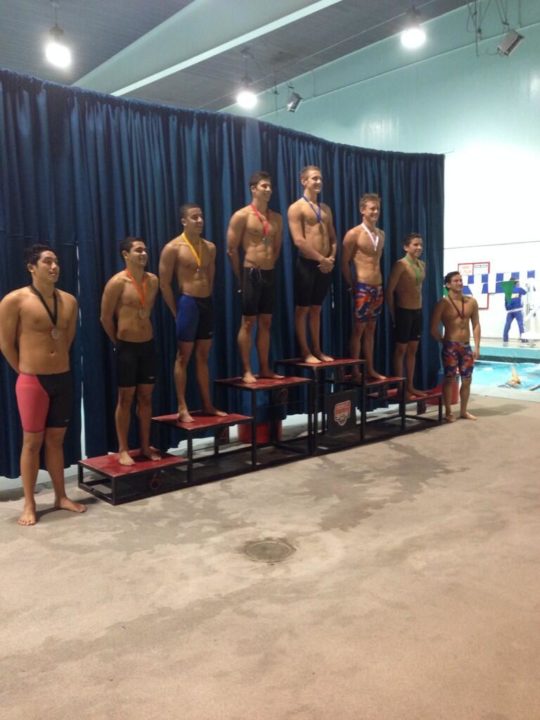 Alex Valente, on the top of the podium, Archive photo via Ken Takahashi

Thanks to Ken Takahashi for the tip on this story.

The latest National Age Group Record came from off of most peoples’ radars, though it sure-well should have.

In the final session of the 2013 California/Nevada Winter Sectional meet at East LA College, Alex Valente of the Santa Barbara Swim Club swam a 46.99 in the 100 yard butterfly to break the record of another Californian: one Mike Cavic. Cavic was a 47.10 back in 2001, and would go on to be the man that almost upset Michael Phelps’ 8 gold-medal run in Beijing while representing Serbia.

Valente left little doubt that he was fully spent on this race, splitting a rocket-fast 21.95 at the 50, and closing in 25.04. He left behind an impressive field that included Cal-bound Kyle Gornay, who was 3rd in 48.97. This makes Valente the first-ever 15-16 under 47 seconds in the 100 yard fly.

Valente has been a 54.20 in the long course 100 fly, and finished 8th at the summer’s Junior National Championships.

those kids are all shredded.