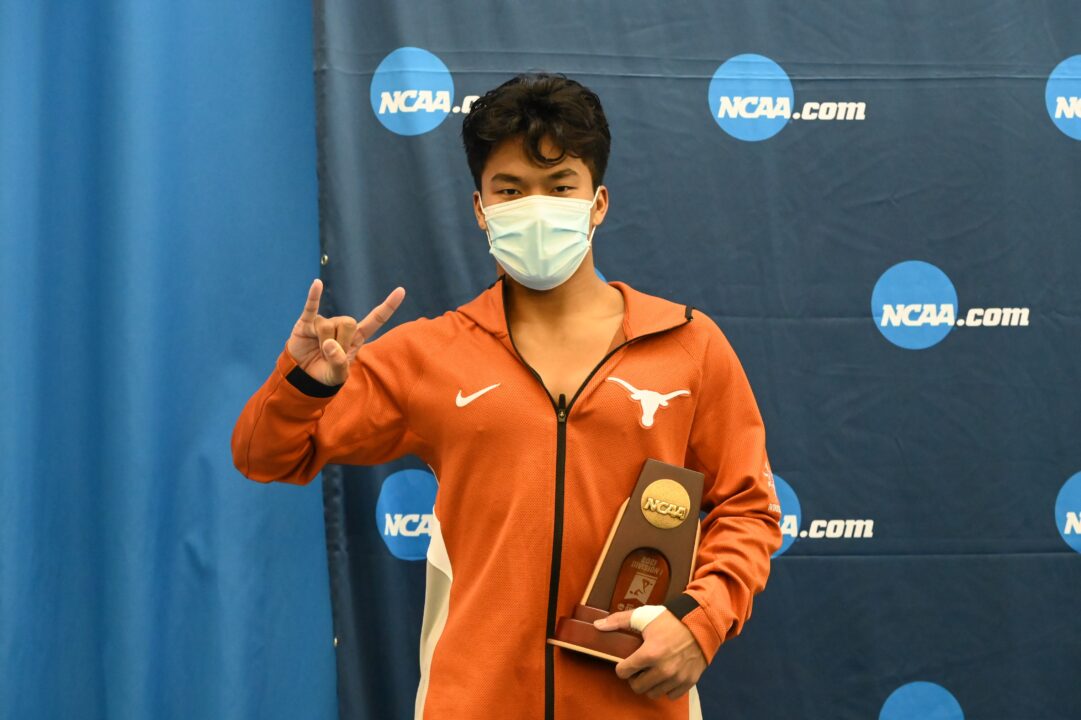 Two-time NCAA Champion Jordan Windle has been temporarily suspended by the US Center for Safe Sport. Archive photo via NCAA Photos

Update: Texas Athletics has released a statement and suspended Windle from all Team Activities.

NCAA Champion and US Olympic Team diver Jordan Windle has been given a temporary suspension by the US Center for Safe Sport on “Allegations of Misconduct.”

While neither the USCSS nor the FBI provide details on open investigations, multiple sources have told SwimSwam that Windle is under investigation for allegedly exchanging nude photographs with at least one minor athlete who is also a member of USA Diving.

The allegations were brought forward prior to the start of the current collegiate season, though Windle was allowed to compete in the team’s meets so far this season while the investigation was ongoing.

In response to questions about the decision to allow Windle to continue competing after the original allegations were made, Texas released a statement, but that statement did not address the decision for Windle to compete in the fall semester specifically.

“We’re aware of the situation with Jordan Windle and are continuing to monitor it closely. We will fully cooperate with all parties involved in this investigation and adhere to NCAA, Big 12 and UT policies and processes as well. We have removed Jordan from all team activities, pending the completion of the investigation. Any further action will be determined at the conclusion of that process.”

As of 2020, the NCAA was not required to enforce US Center for Safe Sport or National Governing Body suspensions, according to Katherine Starr, a former All-American swimmer at Texas who operates a non-profit foundation Safe4Athletes that works to prevent the abuse of athletes.

At the mid-season Texas Diving Invitational in November, where many of the country’s top divers competed, Windle won both the 3-meter and platform diving events.

Windle returned to the Longhorns for a 5th year this season, taking advantage of an NCAA waiver allowing athletes who competed during the COVID-19 season in 2020-2021 an extra year of eligibility.

Windle was a member of the U.S. Olympic Team that competed at the Tokyo 2020 Games, placing 9th in the 10-meter platform event.

Temporary suspensions are used by the US Center for SafeSport while investigating reported allegations. They are published to the Center’s public database when “allegations are so severe that Temporary Restrictions are necessary to mitigate potential risk to others in the sport community,” or in “Cases where the Sanctions imposted include some period of suspension or ineligibility, after a comprehensive investigation has established a violation of the SafeSport Code.”

The suspension includes a no contact directive for Windle with the alleged victim or victims.

This is a true statement in court, regarding criminality.

But, if the FBI has been investigating this since September, and USCSS just now decided to suspend him…the FBI wouldn’t have kept digging on this if they hadn’t uncovered at least some hard evidence, like the actual text messages. And at that point, innocence is a matter of legal technicalities, which I don’t think would absolve him from disdain for doing it.

do not diddle kids, diddling kids is no good

or people older than 18, for that matter.

There goes the much needed diving ponits at NCAAs. The swilmmers will have to step up this year. The NCAA title is in serious jeopardy.

I think this might be a bit bigger than NCAA points.

i don’t think points is the big issue

Points is the ONLY issue – Hook em

Absolutely wow. The lack of reciprocity between NCAA and the US Center for SafeSport allows coaches banned or suspended by USCSS to continue coaching in NCAA, and allows NCAA coaches fired for abuse – including sexual abuse – to coach age group youth sports. It also allows athletes to do the same. Good for Texas for suspending him now; I don’t know what they knew when, so it’s hard to assess if they should have suspended him earlier.

Braden – Just FYI, the USOPC abbreviation is USCSS, not USCFSS.

Also he needs to be charged criminally

As you have all the facts??? Please enlighten us little bear …

Since we don’t know the whole case you never know if she was lying about her age. And considering that it says exchanging, that means she was probably sending stuff as well. Definitely a bad situation but it probably wasn’t one sided. Not defending him because he definitely had a part in it, but I think this should also remind parents to teach how dangerous it is to send those kind of things.

I love how the first thing you do is resort to one-size-fits-all cliches.

How do you know it was a she?

Could’ve worded it a bit better, but it is a valid point. However, he was the adult in the situation and should’ve known to hold himself back

Maybe don’t exchange naked photos with people you don’t know? After all this time, people are too stupid to realize this is how they get caught….

Or people you DO know.

Yeah really! Lol. How do they know the pronoun of the child? The article never mentioned.

Seeing as the victim is also a diver it seems difficult to not know another divers age. It’s usually listed right next to their name.

Everyone in the diving world knows the age of everyone else in diving after coming up through the age groups/junior diving. If he didn’t, it would be very easy to check on the Divemeets profile.

Wait till they turn 18 at least smh