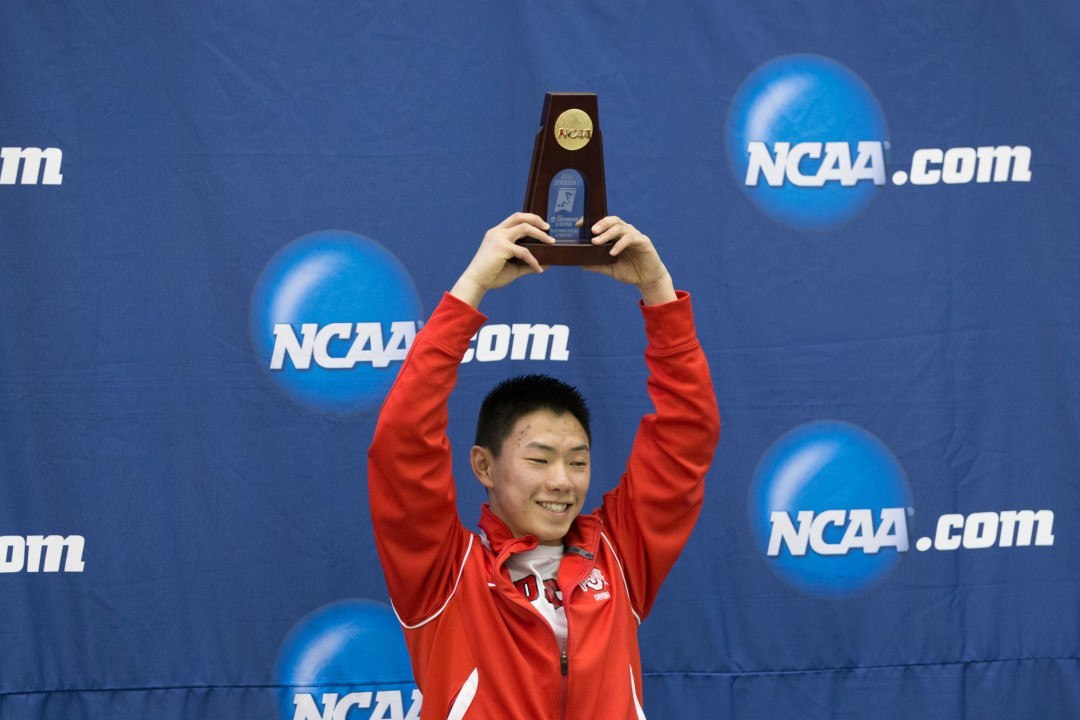 2016 NCAA Champion diver Colin (Zhipeng) Zeng has completed a transfer from Ohio State to the University of Tennessee, where he now appears on the roster as a redshirt junior. Archive photo via Tim Binning/TheSwimPictures.com

2016 NCAA Champion diver Colin (Zhipeng) Zeng has completed a transfer from Ohio State to the University of Tennessee, where he now appears on the roster as a redshirt junior.

Zeng won the NCAA title on the platform in 2016 for Ohio State, nearly cracking 500 points as a redshirt freshman. He was also a double Big Ten champion (platform and 1-meter) and the Big Ten Diver of the Year.

Last year he was third at NCAAs in platform. Though that was a slide place-wise, Zeng still had a solid performance, finishing only behind Miami freshman David Dinsmore and Purdue’s redshirt sophomore Steele Johnson, both of whom finished in the top 3 at U.S. Olympic Diving Trials (Johnson made the Olympics, Dinsmore was third) and weren’t in the NCAA the year Zeng won his title.

Zeng was also a U.S. Olympic hopeful – he was born and raised in China, but moved to the U.S. in 2010 and tried to get his citizenship in time to represent the U.S. at the Rio Olympics, but the lengthy process was not completed by the time Rio rolled around.

Zeng was also 9th in 3-meter last year and 8th on 1-meter. He’s a huge get for Tennessee, which already has double-NCAA finalist Liam Stone returning on the boards. The only event in which Stone didn’t score at NCAAs was platform, Zeng’s best event. That sets up what should be a stellar diving duo for the Volunteer men this year.

Interesting story of his life in China. http://www.spokesman.com/stories/2016/may/07/diving-for-his-life-colin-zeng-seeks-us-citizenshi/#/0

Great kid coming to a great coach. Couldn’t be happier for both of them!