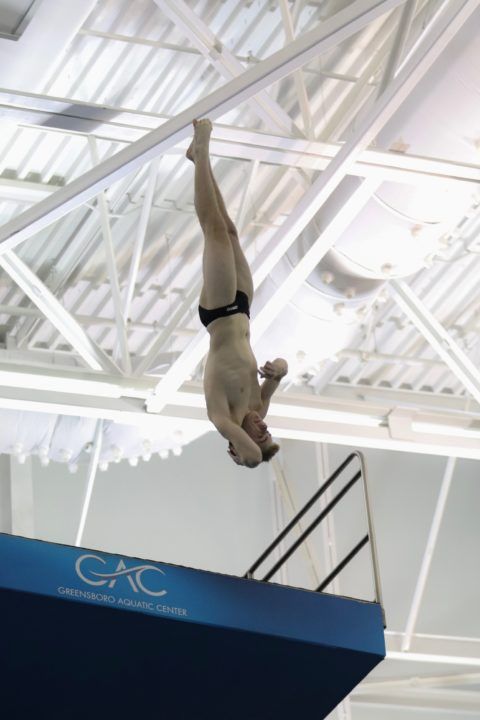 The NC State divers gave their men's team a push in the right direction as the Wolfpack seek a 5th-straight ACC title. Current photo via Allison Fogleman

While the NC State Wolfpack women’s swimming & diving team were picking up their 2nd ACC title in 3 seasons this weekend in Greensboro, the men’s meet was underway simultaneously in the form of the diving competition.

The Miami Hurricanes, who don’t have a swimming program (and as such are done with scoring), swept the diving events. Briadam Herrera won the 1-meter and 3-meter competitionns, while David Dinsmore and Zach Cooper went 1-2 on platform in his absence. The Hurricanes’ big run resulted in 67 more diving points than last year, which helped push down most of the other teams.

Among the teams battling for positions at the top of the team table, NC State, the 4-time defending champions and 2019 favorites, went big in men’s diving (after they had some clutch performances in women’s diving as well). That’s going to make it hard for anyone to jump the gap to catch them in swimming: Swimulator projects them to be 210 points better in the lanes than Louisville and 293 points better than Virginia. Louisville also had a big showing from their divers, who outperformed their 2018 diving scoring by 85 points.

This doesn’t bode well for any team hoping of an upset.

I don’t think there was ever any real shot this year of an upset. Maybe in the coming years…

Will SwimSwam be publishing a fan guide for Mens ACC championship?

Yup! Hoping to have it out tomorrow!

Awesome! Many thanks. You guys do an amazing job!