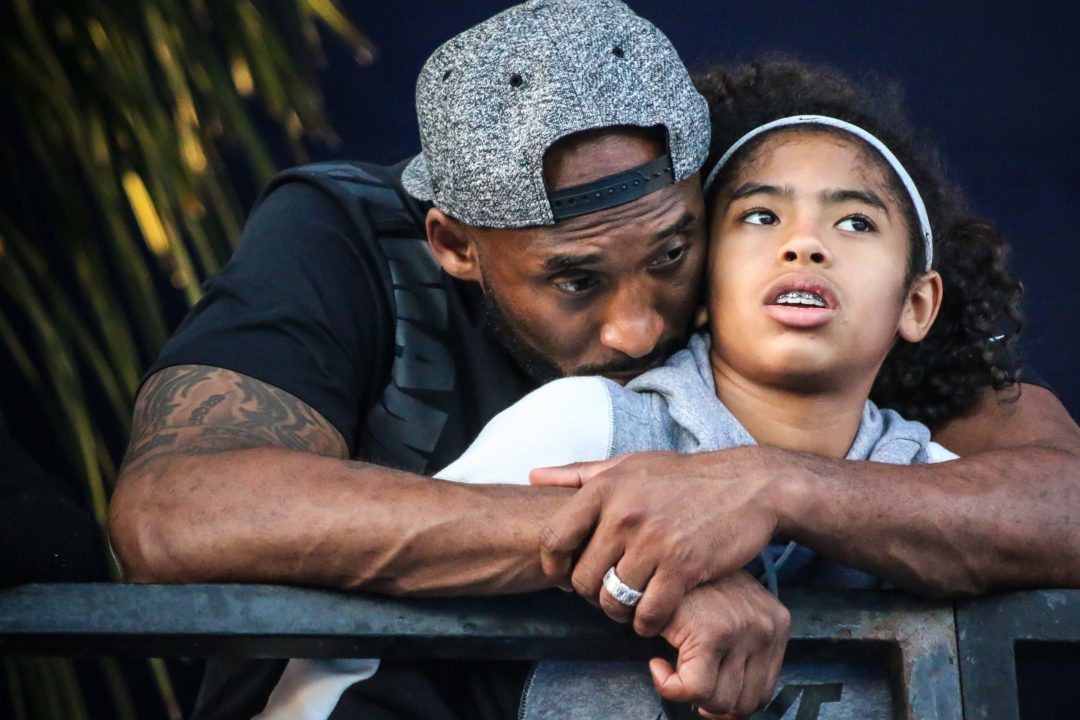 Basketball legend Kobe Bryant has died at age 41. The news was first reported by TMZ and has been confirmed by multiple media outlets. Archive photo via Jack Spitser/Spitser Photography

Basketball legend Kobe Bryant has died at age 41. The news was first reported by TMZ and has been confirmed by multiple media outlets. Bryant was a close friend (and business adviser) to Michael Phelps and made several appearances at major swimming events, including at the 2017 Golden Goggles Awards, USA Swimming’s annual awards banquet, and the 2018 US National Championships in Irvine. Five people are confirmed dead in the crash.

Update: the LA Sheriff’s department announced that there were nine people in the helicopter, not the originally-reported five. None of the passengers or the pilot survived.

Update: TMZ is also now reporting that representatives for Kobe have confirmed that one of his 4 daughters, Gianna Maria Onore, aka GiGi, was also on board the helicopter and died in the crash. She was 13. Kobe recently credited GiGi’s interest in the game as bringing him back to the sport of basketball. The pair were on the way to a basketball practice at the Mamba Academy in nearby Thousand Oaks when the helicopter crashed.

Bryant has had several interludes with the sport of swimming. He once made a visit to Australia where he spent time with Stephanie Rice and members of the Australian Olympic Team. He once famously lauded 3-time Olympic gold medalist Stephanie Rice, saying “I was lucky…I had the chance to see the best in the world prepare and she is FOCUSED.”

Bryant was a 5-time NBA Champion with the Los Angeles Lakers, the 2008 NBA MVP, an 18-time NBA All-Star, and is the 4th-leading scorer in NBA history, recently being surpassed by Lebron James. Bryant was also a two-time Olympic gold medalist as a member of the U.S. men’s basketball team in 2008 and 2012. He also won an Academy Award for Best Animated Short Film for his film Dear Basketball.

Kobe Bryant made an appearance at the 2018 US Nationals alongside Michael Phelps. Courtesy of Torrey Hart/SwimSwam.com

Several swimmers have already posted tributes on social media, with more to come throughout the day. In France, the public is drawing comparisons to several French sportspeople who have died in helicopter crashes, including Olympic swimmer Camille Muffat, who won gold, silver, and bronze medals at the 2012 Olympic Games. She died in a helicopter crash while filming a reality television show. Also on board that flight were boxer Alexis Vastine and sailor Florence Arthaud.

Truly sad. Rest In Peace, Kobe. Your legacy lives on forever. 🙏🏾 Prayers to his family and friends. pic.twitter.com/OAoushUCAV

My heart hurts to hear the news…. r.i.p @kobebryant and gianna…thoughts and prayers to Vanessa and family….

A true inspiration to athletes in all sports. His work ethic and passion was unmatched. RIP pic.twitter.com/FTeOtXG29K

Great tribute at Grammys by the unique Alicia Keys.

RIP Kobe!! Prayers for the surviving family for losing a husband, father, daughter and sister.

A harsh reminder that life hangs by a thread and that everyday we must tell people we love that we love them.

every day becomes like a controlling habit to me there ….but why not

Kobe was not my favorite player but I respect a lot the basketball legend he is and the inspiration he gave to so many people through his work ethic and his passion. He was also very supportive of the women’s game which is appreciable.
I’ve grown up watching him play. Damn, that news really hurts. And his daughter has died too. Tragic. My thoughts go to Kobe’s family and to the families of other people’s died in the crash.

I think the worst part is knowing that this could have been avoided and he could still have been with us today.

Avoided how? By traveling in a car which statistically is way more dangerous?

When a car gets suddenly broken there is still a chance to survive. When it happens to aircraft the chances are extremely slim. I think that’s what Jeff meant. Or may he refers to premature death of 41 years old man. It doesn’t matter. I think such are the feelings of a woman who lost in one moment husband and daughter. I hope she doesn’t blame herself that she could done something to avoid this tragedy.

Maybe they meant that they could have driven. This was him and his daughter and a few others going to a basketball game. Maybe they typically would have driven to the game, but because of the Grammy Awards being in LA, that traffic was worse than normal or certain roads were blocked off for the limo/red carpet aspect of it, so they decided to take a helicopter to not risk being late.