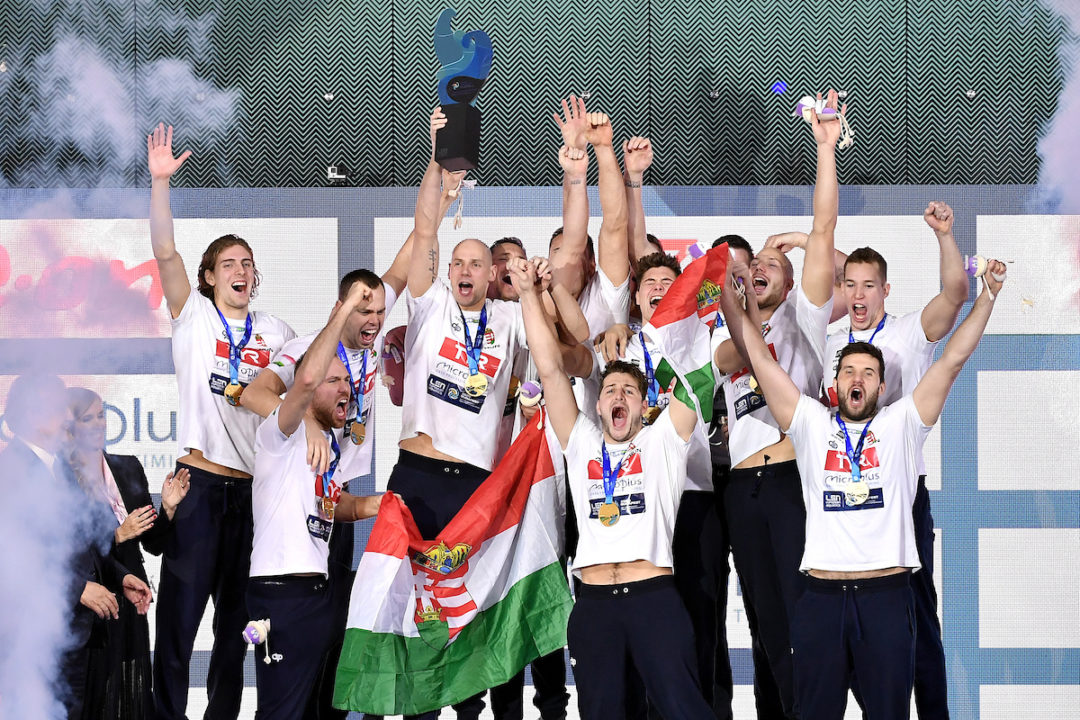 Hungary finally made it: halting the longest wait in its history, the hosts managed to claim their 13th European title, 21 years after their last win. Current photo via Andrea Staccioli / Deepbluemedia / Insidefoto

Hungary finally made it: halting the longest wait in its history, the hosts managed to claim their 13th European title, 21 years after their last win in Florence 1999. The final couldn’t have been any more thrilling, Spain did its best to keep up with the hosts, even had a ball to win the game in regular time, but the decision was left to the penalty shootout. And just like in 2018, Spain came up short, they finished silver medallist once more after an unbeaten run in the championships. The bronze medal match also offered the very best of water polo and this time Montenegro not only caught up with the Croats after being four goals down – like in the prelims, when they lost at the end – but this time they managed to win the game and line up for the victory ceremony again after four years.

Hungary extended its lead in the overall medal ranks by claiming its 13th title. It came after 21 years for the ruling nation of water polo, the first in the new millennium. After three lost home finals (2014 Europeans, 2017 Worlds, 2018 World League) they finally made it, though by a fingernail, or rather one plus one saves, as Viktor Nagy delivered a crucial catch in the last seconds and then his substitute Some Vogel did the only stop in the shootout to send the sell-out crowd of 5,300 to the seventh heaven.

Spain took a brilliant start, jumped to a 3-1 lead, Dani Lopez delivered great saves while denying three man-downs and the offence worked well too. They could even have taken a three-goal lead but the Hungarians killed their man- up.

Then the other goalie Viktor Nagy also arrived to the game turning the second period into a perfect performance for the Magyars. Their man-up started clicking while they shut out the Spaniards for the entire quarter to take over the lead with a 3-0 rush – and as a confidence-booster Nagy pushed Alvaro Granados’ penalty to the crossbar in the dying seconds.

Still, Spain left the miseries behind, Blai Mallarach’s brilliant 6m shot found the back of the net to halt their scoreless phase of 11:01 minutes and from this point it became a neck-to-neck battle. Marton Vamos put away a 6 on 5 but Marc Larumbe’s brilliant lob put the Spanish back to even again. However, Hungary replied with an action goal too, Krisztian Manhercz’s blast hit the net for 6-5 and after a series of great saves and blocks Hungary earned a man-up to double its lead but they couldn’t set up a fine shooting angle under time pressure.

And Spain came back again and again in the fourth. It was amazing to see that they had the patience and grit to net three man-ups in the 19th and 20th  second of the respective possessions, the last one – which brought back them to 9-9 – was even checked on the VAR but the referees decided that it came just before the buzzer. On the other end Denes Varga netted a great one
from a man-up, Manhercz hit his second too (faith compensated the Magyars after an unlucky man-down goal after a rebound, here they were fortunate after a weak assist). Balazs Harai struggled to score goals from the centre in the whole tournament but now he managed to deliver one with a brilliant back-handed shot, that put the Magyars ahead for the third time in this period for 9-8 but Alberto Munarriz netted the buzzer-beater with 1:35 remaining.

Block denied Vamos in action, then Munarriz sent the ball over the bar from the centre and only 40 seconds were left. Mallarach then made a steal 12 seconds from time, it was a 2 on 1 but his speed was fading so he had to take the shot from 6m, still, Viktor Nagy needed his best to deny him in the very last second. Just like in the prelims, the game ended in a draw (11-11 then, 9- 9 now).

Thus, for the second time in a row, the European title was decided in a shootout. Spain lost at home to the Serbs two years ago in Barcelona, but they avenged that here in the quarters, so they had something great to rely on and entered the same five players who had been successful against the title-holders. But among the Hungarians there were seven players from Champions League-winner Ferencvaros which had four successful shootouts in a row in the last one and a half years (and that landed them the Super Cup and the Champions League trophy among others).

This had an effect on the outcome: the Magyars converted all five shots, while head coach Tamas Marcz – who eventually became the fourth Hungarian in history to win European gold both as a player and as head coach – sent the substitute goalie Soma Vogel to the pool for the last two rounds. And the hero of his club’s shootouts did it again: stopped the last shot of Alvaro Granados – the young Spanish enjoyed a great tournament but today he was 1/6 in the game, including a missed penalty. Though he had scored the winner against Serbia but this time his miss, rather Vogel’s save, made 5,300 people roaring while the roof of the Arena almost melt down.

The Magyars celebrated wildly, they finally overcame their demons and after three lost finals at home they clinched this title (quite a difference: in the summer of 2018 they just produced their second-worst performance at the Europeans, finishing 8th). At the other end the Spanish had to settle for their third loss in as many years after falling to the Serbs in Barcelona 2018, to the Italians in Gwangju 2019 and now to the Hungarians.

The bronze went to Montenegro after an incredible game. Just as the final, which copied somewhat the pattern seen in the prelims, this match recalled the great scenes from the second round when the Croats led 10-5 before the last break but the Montenegrins came back to 10-10, however, Croatia netted the winner. Then. Now it was almost the same, but only almost – the end was different.

This time Croatia rallied to a 3-7 lead by halftime and held on for 4-8 deep into the third period too. Few would have guessed that they saw the penultimate Croatian goal with 13:16 minutes remaining (something similar happened to the Dutch in the women’s bronze game one day earlier). But the Montenegrins never gave in this Europeans, and their veterans, Aleksandar Ivovic and Drasko Brguljan netted great action goals to close the gap to 7-8 just before the last break.

After a longer battle Loren Fatovic sent the ball home from a 6 on 4 (breaking a silence of 8:36 minutes) which might have been a calmer for his team as they led 7-9 with 5:40 to go. But Stefan Pjesivac pushed the ball in right from the next man-up, and after Dejan Lazovic made another save in a man-down, the Montenegrins could set up Vladan Spaic who netted the equaliser 1:36 from time. And just 35 seconds later they had it: Aleksandar Ivovic, who was just a shadow of his real self in most of the games, stepped up and blasted in his trademark 6m shot – it was his 5th of the evening.

Croatia got one last chance, a 6 on 5 with 45 seconds on the clock but Lazovic stopped Jokovic’s shot too and the Montenegrins started celebrating as if they had won the title. In fact, having four rookies on board, it was a tremendous feat from this team – en route they beat the 2019 world champion Italians and the 2017 world champion Croatians to earn this very well-deserved medal.

Italy couldn’t change its fortunes against the Serbs (never beat them at the Europeans in 80 years) as the former title-holders pushed the historical head-to-head to 16-0 with a narrow win, to save some pride.

Greece came seventh ahead of Russia – these two teams, plus Montenegro and Croatia earned the right to take part in the Olympic Qualification Tournament (besides the host Netherlands). However, if countries from the other continents refuse to take part (which happened before London and Rio as well), further European teams will be invited based on the rankings from 9 through 12-13th. Though according to the latest news, South Africa will take the African berth this time, and that would mean that unlike before, not the top four but only the top three teams can go to Tokyo.

“The ruling nation of water polo “