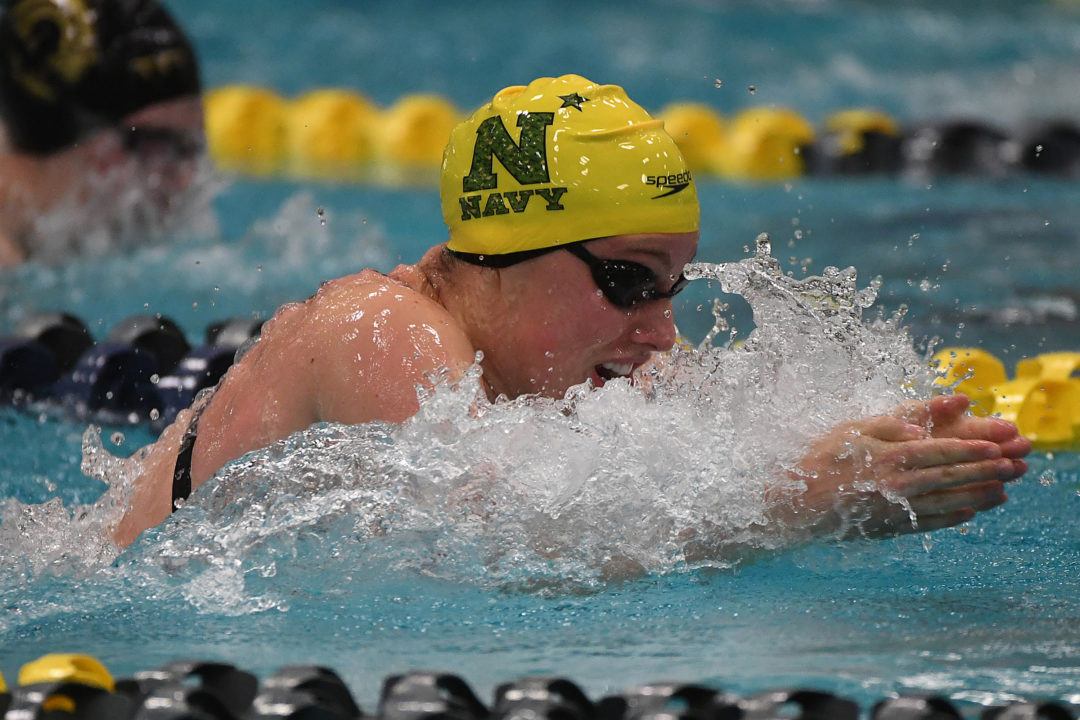 The Navy women's swimming team won the five-team Liberty Invitational in Lynchburg, Va. The Mids accrued over 2,700 points to outdistance the field by 900 points. Current photo via Navy Athletics

The Navy women’s swimming team won the five-team Liberty Invitational in Lynchburg, Va.  The Mids accrued over 2,700 points to outdistance the field by 900 points.

“We were really pleased with the weekend,” said Navy head coach John Morrison. “Our seniors did a great job of leading the team through our first three-day meet of the season, which produced many very good performances for this time of year.  We have a lot of work to do, but this was a big step in the right direction.

“Lauren did a real nice job with three wins.  We also were excited to see many of our freshmen such as Martina Thomas (Fayetteville, Ark.) and Sarah Sorensen (Kennesaw, Ga.) advance to finals of events.”

Navy will resume its fall season December 1 when it faces Army in the annual Star Meet at West Point.

The Liberty swimming & diving team closed out the fall portion of its competition schedule by placing second at the Liberty Invitational, which wrapped up on Sunday at the Liberty Natatorium.

Notable
• Olivia Robinson set a new program record in platform diving, scoring an NCAA Zone Qualifying 229.58 to win the final. She is now qualified for the Zone Diving Meet on all three boards, while Lauren Chennault is qualified for Zones in one-meter and three-meter springboard.

• Alicia Finnigan‘s winning time of 1:56.33 in the 200 fly earned her an NCAA Division I B cut. That time currently ranks in the top 20 nationally among NCAA Division I swimmers.

• Mikayla Herich led the 1,650 freestyle from start to finish, and became the fourth Lady Flame in program history to break 17:00 in the 1,650 free.

• The Lady Flames earned a total of 11 A Finals appearances in individual events between swimming and diving tonight.

• Liberty will host the 2019 CCSA Swimming & Diving Championships, Feb. 20-23 at the Liberty Natatorium. This weekend’s invitational gave teams a preview of the championship format.

• Pitto moved into sixth place in program history with her 2:18.84 in the 200 breaststroke.

Up Next
Lady Flames who have attained qualifying marks will compete in the USA Swimming Winter National Championships, held in Greensboro, N.C. from Nov. 28 through Dec. 1.

LYNCHBURG, Va. – James Madison swimming & diving finished the Liberty Invitational in third with a score of 1,650.

QUOTING COACH PEDERSEN
“This was an overall good weekend for us. The girls performed really well without any break from their regular training schedule. They were competing tired and performed well. There are a lot of learning points and information for us to debrief and grow from. I’m excited to enter the next phase of our training and continue to build toward our championships in February.”

LYNCHBURG, Va. — For the second time in as many days, a Campbell swimmer broke her own program record at the Liberty Invitational as Madison Scott swam the 200 fly prelims in 2:00.68 to surpass her previous mark of 2:02.28.

Taylor McMinn swam a 2:20.38 in the 200 breast finals to take fourth place, her fastest time of the season. Annie Sanchez also posted a season-best mark, swimming the 100 free in 51.75 seconds for a ninth-place finish in the finals.

The Camels will take a month-long break from meet action as they prepare for the FAU Fun Invite on Dec. 20 in Boca Raton, Fla.

LYNCHBURG, Va. – The Georgia Southern women’s swimming and diving team wrapped up action at the Liberty Invitational on Sunday, completing the three-day event with 1,432.5 points, good for fifth place in the team standings.

Georgia Southern placed swimmers or relay teams in the A Finals of 17 of the 21 competed events.

The best individual finishes came from freshman Melissa Cox, who placed third in the 50 Freestyle in a time of 23.36; senior Bre Stuart, who swam third in the 200 Breaststroke in a time of 2:19.80; sophomore Katie Knight, who placed fourth in the Platform Diving event with a score of 172.58 and fifth in the 1 Meter Diving event with a score of 258.75.

“We did a great job leveling up this weekend,” Georgia Southern Head Coach Amanda Caldwell said.