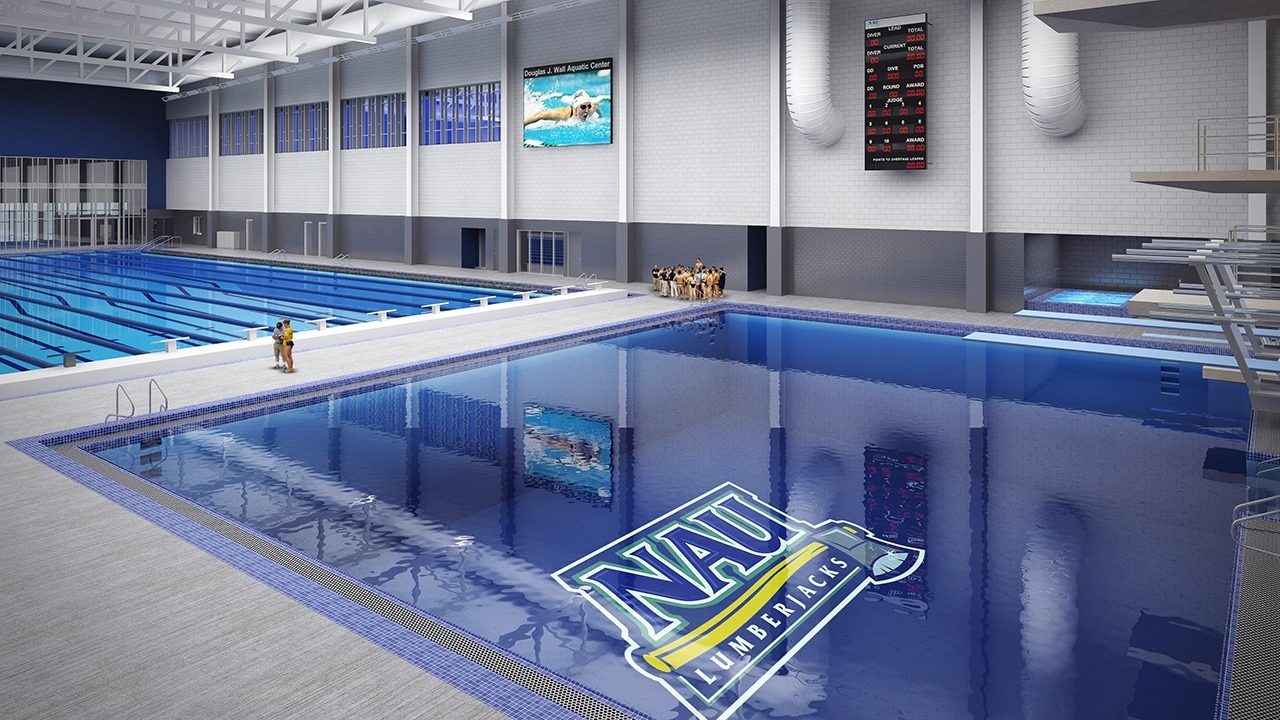 NAU defeated the University of New Mexico on Saturday, winning on home turf and featuring personal bests from the divers. Stock photo via Andy Johns

FLAGSTAFF, Ariz. (November 6, 2021) – NAU Swimming and Diving put up an impressive win in front of the home crowd in Flagstaff today, taking the win against the University of New Mexico Lobos.

To start off the meet, NAU took a first place finish in the 200 yard medley relay. The Lumberjacks relay team A consisted of Sophie Velitchkov, Delaney Phillips, Caylah Jago, and Ashley Lawrence. Relay team A finished the event with a time of 1:45.20.

The divers competed in 3-meter, 1-meter, as well as platform dives. The platform dives were not scored into the meet. Sophomore Victoria Knapp came up with both wins in the 3 and 1 meter dives, with scores of 319.43 and 299.78 respectively. Alyssa Jones made her first appearance since recovering from injury, and took second in the 1-meter dives with a score of 261.45.

“The 3-meter was phenomenal for us, Victoria Knapp in first and Maegan Jensen was second both personal best scores ever, and they both had NCAA qualifying scores. The fact that we can go one through six against a team like New Mexico is amazing. Aly Jones stepped in and was second, and on the platform which we don’t get to do a lot, and Emily Luberto won it. We had freshmen doing new dives and that’s their first college meet, every single one of them had some great things happen. We weren’t perfect everywhere, but I think it was a great first week out,” Coach Nikki Kelsey said.

“I think Rey has been good in the pool and she does a lot, with school and ROTC and swim, some things came together for her. Mostly, she executed race plans and had a great attitude for a tough lineup of events today,” Head Coach Andy Johns said.

Sophomore Caylah Jago brought a huge first place finish for the Lumberjacks, with a time of 55.72 in the 100 yard fly after being a pivotal piece in the teams 200 medley relay win to start the meet.

“I think Jago is figuring things out, she works really hard and Coach Larry does a great job getting that group ready. I think she’s starting to learn how to swim easier, it’s a good sign of things to come and I’m really happy for her and it was a great swim,” Johns said.

The Lumberjacks will be back in action in two weeks, as diving will host the first Lumberjack Diving Invite of the season on Nov.18-20. Swimming will head to grand Junction for the A3 Performance Invite that will take place on Nov.18-20.

“Today was a total team effort for sure, obviously our divers put us off to a great start. We worked pretty hard and expected to see some improvements. In two weeks we will be better when we head up to Colorado,” Johns said.

Nice pool! Too bad they do not have a mens team too.